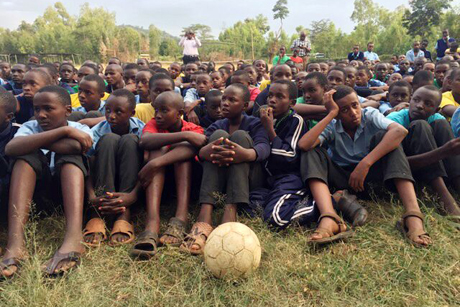 [Anglican World] Football may be a religion for some, but it is also a universal language. One clergyman from the Democratic Republic of Congo (DRC) has a vision to transform lives and he believes football can play a part in bringing reconciliation to his war-torn country.

Canon Désiré Mukaniwra is a priest for Mission, Evangelism and Christian Formation ministry in the Province of the Anglican Church of the Congo, and Congo Brazzaville. A clergyman with a love of football, he explained: “I had a vision to reach out to different social groups and share the Gospel of Christ in the places where people are. Footballers are one of these groups. They spend all their time in the football field and most of them have no time to go to church on Sundays.”

“An idea came to me during my mission in one of our regions where the war had been so intense in Rutshuru and I organised an outreach with the footballers.” Canon Désiré explained how he preached about God’s love to this group a few times. He said, “The war had brought tribal conflicts between people. My purpose was to bring together young people, who were being used by some people for killing others, to come together to rebuild and develop our nation for God’s Glory.” He explained that many of the children and young people in that area had been traumatised by violent rebel attacks and he believed football could help build bridges.

From this small step three football teams were brought together. He said, “They played together and also heard the word of God and some came to faith in Jesus Christ. Now we are hearing the tremendous news that people are coming and working together. This is a sign of hope and reconciliation.”

In addition to Canon Désiré’s work bringing together young footballers, he is also the Projects Director of Goma, Masisi and Rutshuru Archdeaconries, in Bukavu Diocese led by Bishop Bahati Balibusane Sylvestre, where he has helped set up ecumenical projects to alleviate poverty and enhance the lives of people returning to the area after the war. His school for orphans in Goma is just one of the projects which came to the attention of the mother of a UK footballer.

Kathy McQueen, whose son Sam, plays for English premier league football team Southampton FC, visited the country last year as part of a team from the charity Flame International working with church leaders at a national conference. One afternoon Kathy and Désiré found themselves kicking a ball around with local children and their shared vision to make a difference to young people through football became the topic of conversation.

She said, “I extended my trip to visit some projects. Everywhere we met people with stories of some experience of violence, loss or trauma. The Congo is one of the most traumatised places on earth – 40 per cent of the women have been raped. But there was also a huge lack of the most basic things – people didn’t have enough food for their children or medical supplies and the help they have offered is all run on a shoestring.” She said Canon Désiré struggles to keep the school open due to lack of funding. “His wife, Claudaline, runs a tailoring business,” she said, “If she doesn’t sell enough dresses they don’t have enough money for food that week. But he still dreams of each pupil having a laptop and the school having a football team!”

Other projects run by the church include an adult literacy programme, growing of Irish potatoes, women’s handicraft project and a tailoring project. Canon Désiré said, “We thank God, because all the actions are bringing about change with tangible impact in terms of spiritual, social, economic, visible unity and reconciliation. And the footballers, who are also poor, are joining these projects when they are free, which helps with their self reliance as well.”

Kathy’s dream is to connect UK football players with children in the DRC and set up a mentoring or sponsorship programme. “My hope it that there would be some financial link and the massive wealth of the football industry would be invested in the lives of children in the DRC. These players could be great role models for the children.”

Canon Désiré and Kathy are not alone in their dream. Co-director of the Anglican Alliance, the Revd Andy Bowerman, who is also chaplain to Southampton FC, recently brought together a group of people interested in how football might be used for transformation and reconciliation. He said, “Wherever I go travelling around the world I see children playing football with anything. Perhaps football’s main contribution to conflict resolution is its universality; it crosses frontiers inspiring and motivating children.”

Andy believes sport can play an important role in maintaining open channels of communication in places of conflict and tension. The Archbishop of Canterbury, Justin Welby, has given his backing to the emerging initiative and said, “I hope that we can develop something that goes with sport and goes with reconciliation and peacemaking.” The football for reconciliation and development initiative aims to research and map existing programmes, networking and articulating the Church’s distinct role in football in development, holding a regional consultation at a future date.

This article first appeared in the February 2016 edition of Anglican World, the quarterly magazine of the Anglican Communion. You can subscribe here.