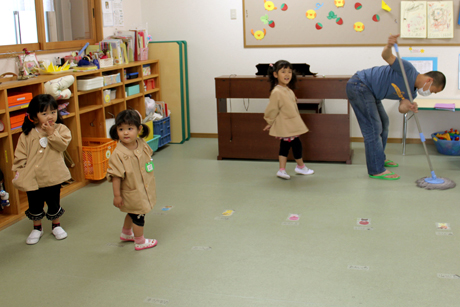 [United Society] On the fifth anniversary of the Great Eastern Japan Earthquake of 11 March 2011, the Anglican Church in Japan is reissuing its call for a world without nuclear power plants.

The earthquake and subsequent tsunami caused devastation – claiming 15,893 lives, with 2,572 still missing – and triggered a nuclear disaster, with meltdowns in three reactors at the Fukushima Nuclear Power Plant.

A 20km area around the power plant remains off limits due to contamination – and residents outside the exclusion zone are living in fear of radiation poisoning.

Having worked with survivors of the disaster, the Nippon Sei Ko Kai (NSKK, Anglican Church in Japan) is calling on the Anglican Communion to join its call to put a stop to nuclear power.

Kay Ikezumi, the secretary general of the NSKK project Let Us Walk Together Part II, which looks at nuclear power and radiation, said: “The true impact of the aftermath of the nuclear disaster is not widely known. We think the Japanese government wants to hide the reality from the Japanese people and from the world.

“Before the disaster, many people thought nuclear power was necessary, but now many people are changing their minds.

“It will take 40 to 50 years for the land to be decontaminated sufficiently for human habitation, and thousands of years more for complete decontamination.

“Moreover, even today, the Fukushima Nuclear Power Plant is producing about 500 tonnes of contaminated water every day, and it is becoming increasingly difficult to find places to safely deposit this.”

Japan has 54 nuclear power plants, of which all but two were temporarily shut down following the nuclear disaster pending new safety measures.

Mrs Ikezumi said: “NSKK has concluded that we need to decommission all nuclear power plants – we have managed perfectly well in Japan without them, although perhaps we will need to think about living simpler lives.

“As Christians, we believe anything that threatens or violates lives must be stopped.”

The effects of contamination have caused an increase in children with thyroid cancer, (fortunately treatable), as well as malformed plants, trees and animals.

Church is supporting children and the elderly

NSKK has been organising day trips and camps in safe areas of the countryside so children can run around outside without fear of contamination; research has shown that such activities help to reduce radioactive substances in the body.

Other initiatives of NSKK include providing care for elderly people forced to relocate, including opportunities for socialising and exercise.

Speaking this year, the Most Revd Nathanael Makoto Uematsu, Primate of NSKK, said: “Nuclear power plants are a danger; we cannot control this power when an accident occurs; the problem of re-processing spent nuclear fuel has been neglected.

“We will continue to walk together with victims in the disaster areas. We ask everyone, please continue to pray for these victims.”

In 2012, the 59th General Synod of NSKK issued this statement: “In solidarity with other denominations and faiths, we call for an immediate abolition of nuclear power plants and a conversion of Japan’s energy policy toward the development of alternative sources of energy.”

The statement continues: “The accident . . . has posed a threat to people’s lives by disseminating radioactive substances, not only in the immediate vicinity but in a much wider area, thus revealing that nuclear power generation is extremely dangerous in itself.

“It is not too much to say this is a warning from God to each of us who, having suffered from nuclear bombs, have failed to acquire sufficient knowledge about nuclear power and exposure to radiation.”

Rachel Parry, the United Society’s director for global relations, said: “As citizens of the only nation to have suffered the impact and consequences of atomic bombs as an act of war, Christians in Japan have a lot to say about nuclear energy. And members of the Anglican Church in Japan, through their close engagement with communities after the Fukushima disaster five years ago, know through personal experience how dangerous and devastating nuclear accidents are.

“With their evidence, they are showing the world that this technology brings death, through their knowledge they are asking us to listen, and with the sacrifice of their lives, they are prophets of peace.”