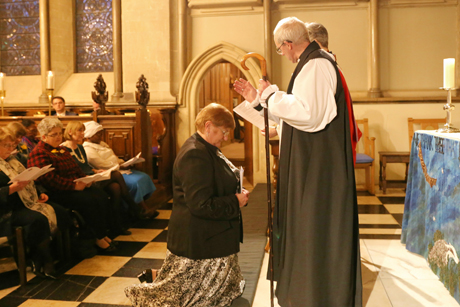 The worldwide President of the Mothers’ Union, Lynne Tembey, is recommissioned by the Archbishop of Canterbury Justin Welby during a service at Lambeth Palace. Photo: Lambeth Palace

[Lambeth Palace] The Archbishop of Canterbury said he “praises God” for the Mothers’ Union during a service at Lambeth Palace this week to recommission Lynne Tembey as worldwide president of the global Anglican women’s organisation.

Lynne Tembey was reappointed to be the worldwide president of the Mothers’ Union from 2016 to 2018, having first been appointed three years ago.

During the service Archbishop Justin Welby said: “The Mothers’ Union in so many places is an organisation that listens to the voices of weeping. Whether it’s in Burundi, the Congo or South Sudan; whether it’s in homes in cities where when the local football team loses there is a 50 percent increase in domestic violence; whether it is in the loneliness of weeping by people who are not suffering physically but are spiritually empty and lost; it is the Mothers’ Union that exists in the vision of Mary Sumner to speak of those things that God has provided that bring hope, help and a future.

Central to this vision, he said, is “an extraordinary movement to support the family.”

“There has never been a time when the family was not a place that needed the light of Christ shining within it to become what God has called it to be. And you hold that treasure in your hands, and as we go to the reaffirmation that is part of the vision.”

He added: “But there is also such a need for global women’s groups. And you are among the most embedded, the most effective, the most widespread. There are few that can rival you – if any.”

Reflecting on United Nations research showing that no major civil conflict since 1945 has ended without the involvement of women’s groups, the Archbishop said the Mothers’ Union holds in its hands two aspects of “the most extraordinary treasure that God has brought together.”

“You are one of the greatest of women’s groups in the world, and you have the treasure of the gospel of reconciliation. What more could be needed to be transforming of the world in which we live?

“So . Nine-tenths of your work is hidden in the parishes and the dioceses, in the hills and the villages – doing the work of bringing hope and strengthening families, of supporting churches, of transforming communities.

“I pray that God will go on blessing you, and that your vision of the God who rises above all the fears, all the problems we face… will end with a vision of hope and confidence not in the Mother’s Union and this great heritage, not even in this wonderful vision, but in the God who underpins and secures it all.”