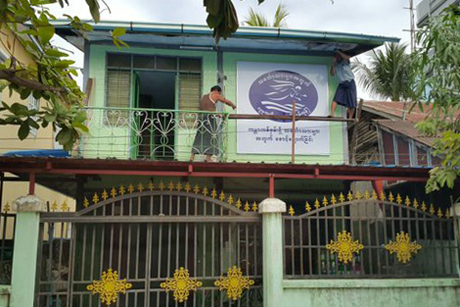 The Mission to Seafarers new mission centre in Yangon was dedicated last weekend during a service in Holy Trinity Cathedral. Photo: Mission for Seafarers

[Anglican Communion News Service] The city of Yangon in Myanmar is home to the Mission to Seafarers’ newest port facility. The Anglican mission agency’s newest mission centre was dedicated on Feb. 28 during a service at Holy Trinity Cathedral in Yangon (formerly known as Rangoon).

The new facility is located close to the Department of Marine Administration in Yangon, which will enable Myanmar’s seafarers to access it easily.

A former deck cadet who now holds a master mariner’s licence, George Ko Ko Gyi, will head up the MtS Yangon Mission; assisted by Mya Min Tun. They will arrange a ship-visiting programme, administer the main centre and provide day to day support and advice for seafarers and their families.

“Funds raised by the Mission to Seafarers in Hong Kong for this purpose amounting to $30,000 [USD, approximately £21,620 GBP] were provided along with strategic support to the project after the MtS Global Review of Ports project identified a strong need for seafarers to have access to support and care in this port.

“I wish to thank our Regional Director for East Asia the Revd Canon Stephen Miller who led the delivery team and worked within a highly complex political and legal landscape to bring our vital maritime welfare work for seafarers to Myanmar’s most important port. Yangon accounts for over 90 per cent of all imports and exports to the country and it has expanded capacity from around 1m tons to 3m tons since 1996.

“Formerly known as Burma, Myanmar is only just expanding its trade and international relations after many years of closed borders and civil war. This ground-breaking project is inspired by the new energy and dynamism which has grown in the country in recent years and I wish the new team there every success.”

The new co-ordinator of MtS in Yangon, George Ko Ko Gyi, said: “Yangon is one of the main seaports in Myanmar and also a key city for supplying labour to the shipping industry worldwide. We will provide vital welfare support and pastoral care to all seafarers and their families, in partnership with the local church and port authorities.”

The MtS secretary general, the Revd Andrew Wright, commented: “The Mission is committed to the support of seafarers and their families. In the last year we have underlined that ‘family’ element of our work with projects in the Philippines, in Ukraine and now in Myanmar.

“Further developments are expected in other areas during 2016. As secretary general I am absolutely delighted with the rapid progress that has been made and at the clear evidence that these projects are proving a major benefit to seafarers’ families. Such projects enable us to ensure joined-up work – family issues raised with our support teams in ports and on-board ship are able to be followed up locally, as well as many families being able to approach us directly.

“The launch of the project in Myanmar is a further significant milestone and I applaud all who have been involved. Many seafarers come from Myanmar and they will be delighted to know that a new kind of support is available to their loved ones at home. The Mission to Seafarers is committed to developing new work in Myanmar, not just with families, but also through the provision of an in-port welfare service to seafarers. I look forward to keeping in close touch as this project goes forward.”