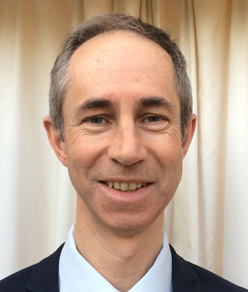 Butcher brings a wealth of journalism experience to the role. He began his career in newspapers before joining the BBC in 1990 as a producer in its national radio newsroom where he wrote and edited news summaries and bulletins across the range of radio networks. He also worked on television, as a producer on the One and the Six o’clock news bulletins, and for the BBC World Service and at the parliamentary unit in Westminster.

“The Anglican Communion is an amazing global family which it will be a privilege to serve,” he said Arch 1. “I want to build on the excellent work already done here to communicate what that family is doing – whether it is in the corridors of power or among the world’s poorest communities.

“There are so many stories to tell and, with the revolution we are witnessing in communications, I hope to make it easier to get those stories told and shared.”

“Adrian’s vast journalistic experience will help the Communion tell its story; and make known the work, the mission and ministry of global Anglicanism. This is a key appointment and an important role. My colleagues and I are very much looking forward to working with Adrian.”

Butcher is married to Catherine who is a journalist and editor. She is director of communications for HOPE, and formerly worked for Mothers’ Union, where she launched Families Worldwide. Catherine has just co-written The Servant Queen and the King She Serves, a book about the Queen’s Christian faith which has been published to coincide with Queen Elizabeth II’s 90th birthday.

The Butchers have two grown children and live in Sussex where they attend St John’s Meads church in Eastbourne.