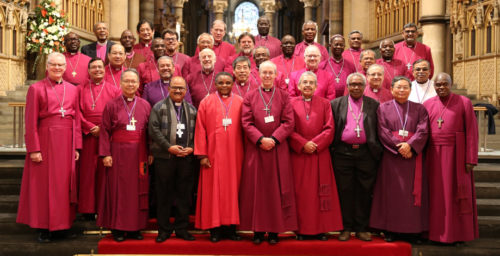 [Episcopal News Service – Fort Worth, Texas] The Episcopal Church is still part of the Anglican Communion, despite actions taken by the primates in January, Presiding Bishop Michael B. Curry said Feb. 26, adding he hopes the church “will be able to bear witness” to the entire communion.

Curry’s comments came during his opening remarks to the Executive Council at the beginning of its Feb. 26-28 meeting at the American Airlines Training and Conference Center here.

“At this point in time, we’re part of the Anglican Communion and my prayer is that we will always be a house of prayer for all people and that we will be able to bear witness to what Jesus taught us about that in the Anglican Communion,” the presiding bishop said. “And that we’ll do so with love and charity, and we will show the same love and charity and honor that we do for all of our people – gay and lesbian and bisexual and transgender – that same love and honor and respect to our brothers and sisters who are part of the communion.”

If the church can take “that gospel high ground,” the Episcopal Church in time may be an example for the rest of the communion, he said.

A majority of Anglican primates on Jan. 14 asked that the Episcopal Church, for a period of three years, no longer serve on ecumenical and interfaith bodies, should not be appointed or elected to an internal standing committee “and that while participating in the internal bodies of the Anglican Communion, they will not take part in decision-making on any issues pertaining to doctrine or polity.”

Curry said the primates took that stance because a majority of them see the Episcopal Church as “having deviated from the doctrinal tradition of Anglicanism” when General Convention last July changed canonical language that defines marriage as being between a man and a woman (Resolution A036) and authorized two new marriage rites with language allowing them to be used by same-sex or opposite-sex couples (Resolution A054).

The convention did not see those actions as a change in the doctrine of marriage but “an expansion of who can be eligible for marriage,” Curry said. However, the presiding bishop reminded the council that before the primates’ gathering began, and even in the early days of the Jan. 11-15 gathering, some Anglicans felt that the Episcopal Church needed to be disciplined for convention’s actions. And some felt that the church ought to be expelled from the communion.

“The overwhelming majority of primates felt that if marriage is doctrine or core doctrine then it is part of our catholic tradition that there can be no changes in doctrine that are not the result of a consensus of the faithful,” he said, “[and] that no individual entity of the church catholic can change doctrine.”

Curry said he does not see marriage as core doctrine, such as the doctrine of the Trinity or the doctrine that Jesus is both fully God and fully human.

As the primates gathering opened, Curry said that he, Anglican Church of Canada Archbishop Fred Hiltz (whose province is considering similar changes in its marriage canons), and Archbishop Foley Beach, the leader of the Anglican Church in North America (ACNA), each addressed the primates. Beach was invited by Archbishop of Canterbury Justin Welby in an effort to avert a boycott from conservative African archbishops. (ACNA is composed largely of former Episcopalians who chose to break away from the Episcopal Church. Some African primates have declared their affiliation to ACNA.)

Curry said he told the primates’ gathering that his election in July 2015 as presiding bishop “said something about what the Episcopal Church sees as its mission in this particular mission moment” and that mission has to do with evangelism, racial reconciliation and the Jesus Movement. He said his remarks “set the tone” and there were some “frank, tough – always respectful, polite but tough – conversations that were formal,” as well as informal conversations in hallways and in the line at meals.

In many of those informal discussions, Curry said, the Episcopal Church’s relationships with provinces, dioceses and congregations across the communion were mentioned positively.

Eventually the gathering came to “a critical moment” when the primates were asked “whether we were committed as primates present to walking together” before any other decisions were made.

“And that body said yes,” Curry said, calling that agreement “not an insignificant statement.”

The perspective that the Episcopal Church ought to be punished for its actions “didn’t dominate the meeting,” he said, but the resolution that was eventually passed “reflected grave disagreement – profound disagreement – with our action and yet it did not sever relationship.”

The majority of the primates argued that the Episcopal Church “had changed doctrine and therefore something had to be done,” Curry said.

“So, given that, action had to be taken, but the primates did not take action that severed our relationship,” he said. “Their action was surgical, specific; and, one might argue that given where people were when they came [to the meeting], mediating.”

Curry suggested that the primates’ decision might represent maturity in the sense of family systems theorist Rabbi Edwin Friedman and others who “taught us that when you’re in deep conflict, don’t try to find deep fixes because they don’t work. They’re Band-Aids and are temporary … that what you must do is find the points of clarity.” Finding such points of clarity in the disagreement and staying in connection and relationship with each other can bode well for eventually finding a way forward, Curry said.

“It may be that we actually did find a mutual place (in which) to disagree,” he said.

As to the future, Curry said, he was clear that “the Episcopal Church is not going to change in three years.”

“Nobody knows what happens after the three years; we didn’t discuss it,” he said.

The ACC, the communion’s main policy-making body which next meets April 8-19 in Lusaka, Zambia, will have to deliberate for itself, Curry said.

The Episcopal Church’s three representatives on the ACC – Connecticut Bishop Ian Douglas, House of Deputies President the Rev. Gay Jennings, and Rosalie Ballentine (a former Council member) – have all said they plan to participate fully in the Lusaka meeting.

Retired Malawi Bishop James Tengatenga, who chairs the ACC, said recently that the Episcopal Church delegation has the “right and responsibility” to attend the meeting and to vote.

During her opening remarks to council, Jennings said thanked Curry for what she called “the wisdom and steadiness with which you guided us all through the recent primates meeting and its aftermath.”

“While confusion reigned and rumors swirled, you helped us understand that we are still full members of the Anglican Communion, that our mission relationships with Anglicans across the world are strong, and that what binds us together is far stronger than what threatens to separate us.”

She said she would take Curry’s spirit with her to Lusaka “where you can be assured that I will participate fully with a glad heart, a strong spirit and pride that the Episcopal Church fully affirms the dignity of all of God’s children, including our lesbian, gay, bisexual and transgender sisters and brothers.”

The council gave both Curry and Jennings standing ovations after their opening remarks, an uncommon reaction.

Meanwhile, Uganda Archbishop Stanley Ntagali, who had left the primates meeting when it became clear that the Episcopal Church would not be severely punished, said recently that his church would not be represented at the April ACC meeting because “godly order” had not yet been restored to the communion.

In a Lenten message he said the fabric of the Anglican Communion has been torn “at its deepest level” since the 2003 election of Gene Robinson, whom he called “a divorced father of two living in a same-sex relationship” as bishop of New Hampshire.

He said that the primates’ action in January was a “symbolic vote; it was not a substantive vote” and argued that Anglicans “continue to be betrayed by our leaders.”

Full ENS coverage of the primates’ gathering is here.