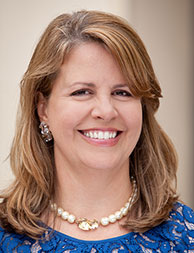 [Seminary of the Southwest press release] Dean and President Cynthia Briggs Kittredge has announced the appointment of Betty Hewell to the position of Vice President for Institutional Advancement for Seminary of the Southwest. Hewell comes to the seminary from The Seton Fund where as Senior Director of Development she served as Campaign Director for the $50 million fundraising campaign for Dell Seton Medical Center at The University of Texas, the new teaching hospital.

Betty joined The Seton Fund in December 2012 after working for her alma mater, The University of Texas at Austin, for eight years in major gifts in the University Development Office and leading the major gifts team on the $3 billion fundraising campaign. She worked closely with various university leaders to successfully raise millions of dollars for programs, building projects, and endowments to benefit university endeavors. Previously, she worked in development for three years at the Shepherd School of Music at Rice University and for five years at the Juvenile Diabetes Research Foundation in Houston.

Hewell is a multi-generation Texan and a member of Westlake Hills Presbyterian Church where she has been elected to the position of Elder. She begins her work at the seminary on March 21, 2016.