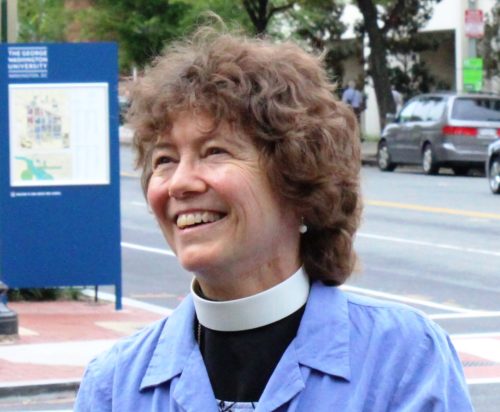 [Episcopal Diocese of Western Massachusetts press release] Effective Feb. 24., the Rev. Dr. Margaret Bullitt-Jonas will begin serving both the Episcopal Diocese of Western Massachusetts and the Massachusetts Conference United Church of Christ as missioner for creation care. What may possibly be the first joint appointment of this kind between the two churches represents the effort to strengthen ecumenical collaboration, communication and Christian witness around the critical issue of climate change.

The Rev. Dr. Jim Antal, conference minister and president of the Massachusetts Conference, United Church of Christ said this of the joint appointment: “Climate change teaches us that we’re all in this together.  This first of its kind sharing of a staff person between the UCC and the Episcopal Church echoes this reality.  By focusing on the greatest moral challenge humanity has ever faced, this partnership of the two largest Protestant denominations in the Commonwealth will amplify the essential role people of faith must play to restore the Eden into which we were born.”

Addressing environmental degradation from a Christian vantage point became Bullitt-Jonas’ central ministry in January of 2014 when she accepted the call to serve as Missioner for Creation Care for the Episcopal Diocese at the request of Bishop Doug Fisher. Since that time, she has been active in organizing public witness, communicating the most current information, and representing people of faith in the conversation to preserve, protect and cherish the earth.  She seeks to inspire and support a wave of religious activism to address the climate crisis, deepen reverence for God’s creation, and create a more just and sustainable society.

Fisher, who has been deeply engaged in deepening the shared ministry of the Episcopal Church and the Evangelical Lutheran Church of America, is very excited about Margaret’s appointment in the United Church of Christ: “Climate change threatens the future of nothing less than God’s creation on this planet. Of course religious denominations and faith traditions should come together in common cause to work for the gift of life God has given us. With great gratitude for my friends, Margaret Bullitt-Jonas and Jim Antal, I rejoice in this mission of collaboration and embrace the hope that we will inspire our society to care for the generations that follow us.”