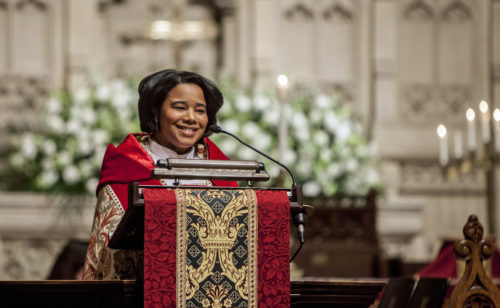 The Very Rev. Miguelina Howell speaks during her Feb. 18 installation as the 10th dean of Christ Church Cathedral. Photo: Episcopal Church in Connecticut

Howell, an Episcopal priest born and raised in the Dominican Republic, was elected last November after serving as the cathedral’s vicar since fall 2013.

Howell’s installation was a celebration of culture and people as much as an official ecclesiastical act.

A quena flute and a charango – which looks like a small, 10-string guitar – were as integral to the event as the pipe organ, with its 60 stops and 71 ranks. Formal choir offerings from Bach and Faure gave opportunities for quiet meditation as much as a different group of cathedral musicians gave opportunities to clap and move with the rhythms. Incense filled the space, lingering to the end; holy water was sprinkled on everyone, using bundled boxwood sprigs, following a renewal of baptismal vows. Language flowed between English and Spanish.

At the installation, Hartford’s mayor Luke Bronin read a proclamation naming Feb. 18, 2016, “Christ Church Cathedral Day.” Other city leaders, with whom the cathedral has built partnerships, were present along with many officials and guests from across the provinces of the Episcopal Church. The Office of Latino/Hispanic ministries arranged to broadcast the service to reach an even wider audience.

Underscoring another important partnership that evening, the cathedral installed the Very Rev. Emsley Nimmo, dean of the Diocese of Aberdeen & Orkney in the Scottish Episcopal Church, as an honorary canon of the cathedral. The Very Rev. Issac Poobalan, provost of St. Andrew’s Cathedral in that diocese, read a message of goodwill from their bishop, the Rt. Rev. Robert Gillies.

Nominating and installing members of one another’s diocese as honorary canons of their cathedrals has been part of how the relationship has been sustained. Currently, the Rev. Michel Belt, recently retired rector of St. James Episcopal Church, New London (home parish of Samuel Seabury), serves as honorary canon of St. Andrew’s Cathedral in Aberdeen.

In his homily, Connecticut Bishop Ian T. Douglas emphasized the particular role a cathedral can take in that participation. He started with a history lesson about cathedrals. First millennium cathedrals, he said, were places from which people were sent out to be about God’s mission, and later, to plant churches. Over time, in this country, the Episcopal Church began to build or designate cathedrals as symbols of power and privilege, to which they expected people would flock. Christ Church Cathedral in Hartford, the largest and wealthiest parish in the diocese at the time, was designated a cathedral in 1919.

“Instead of go, go in the mission of God,” Douglas said, “cathedrals became a place of come, come and be drawn into the ‘one, true church.’”

Douglas’ charge to Howell, and to all of the Episcopalians in Connecticut, was to make Christ Church Cathedral in Hartford a place where people are sent out.

“If this cathedral is to have meaning in the 21st century then it must reclaim the ancient calling of a cathedral as a place from which we go, go in the mission of God.  Like the 72 in our gospel tonight, sent out to every town and place traveling lightly, we too must go, go from this cathedral, to every town and city in Connecticut and beyond, to effect God’s healing and proclaim that the kingdom of God has come near,” said Douglas.

He added, Howell “gets it.”

“Lina gets that our vocation, our baptismal vocation, is to be fundamentally about the mission of God in the world. She knows, at the very center of her being, that following Jesus means going out into the neighborhoods, traveling lightly. Each and every one of us is called in baptism to be agents of God’s healing, God’s kingdom, God’s mission of restoration and reconciliation.

“In addition, as the first and only Latina dean of an Episcopal Cathedral, Lina embodies the breadth of the cultures and languages of the Episcopal Church in the 21st century; and especially in this city of Hartford where 40 percent of the population is Hispanic. I am convinced that her commitment to the Gospel, her ceaseless energy, her incredible organizing gifts, and her love of Jesus will help this great cathedral be the resource it can in empowering each and every one of us as apostles in God’s mission.”

Howell grew up across the street from St. Andres Episcopal church and school in Santo Domingo, in the Dominican Republic. She used to “play church” when she was young, and no one was around, and also helped the students in her Episcopal school to participate in the school’s weekly liturgical service. She began her vocation in the Episcopal Church as a teenager, serving various youth ministries.

After finishing her graduate studies and licensing as a clinical psychologist, she earned a theological degree from the Centro de Estudios Teologicos and was ordained a priest in 2003.

One of the projects she was asked to do in a ministry formation program was to plant a church where none existed, which she accomplished, with a friend. That parish continues to this day and now runs a school as well. In the Dominican Republic, Howell served three congregations and as executive director of the diocesan camp and conference center.

Before moving to Hartford, Howell served parishes in Orange and Paterson, New Jersey.

Douglas’ charge to “change the direction” of the cathedral has already begun. Over the past few years it has been discerning its current and future vocation. Among the conclusions of that discernment, reached in 2015, were to “develop ongoing relations with civic leaders, and with organizations and institutions that are devoted to the common good”; see itself as a “catalyst for mission, identifying ways in which parishes can work together, connecting parishes with other faith communities that are participating in God’s mission, and connecting the faithful with secular ‘missionaries’”; and “explore new mission fields from time to time, using its resources to clear a pathway for others to follow.”

Now, the cathedral faces a moment of “evident adaptive change, creativity and collaboration in the ever-evolving landscape of the city of Hartford, the Episcopal Church in Connecticut and in the world,” Howell said.

“The cathedral is looking to be outside of our walls, changing the way we used to do things, and this is part of what my ministry has looked like in the past, in different places,” Howell said. “I bring gifts of collaboration, of empowering lay leaders to recognize their role and their ministry in the life of the church and in particular their participating in God’s mission, of vision and strategic thinking and planning, of organizing, all of which will support the work and vision of the recommendations of the discernment task force.”

The cathedral has already started to send people out into the Hartford neighborhoods, co-sponsoring a music program at a local school for children of limited financial means.

“I think Hartford is a place in which there’s so much opportunity to make a difference in the world,” Howell said. “It is the right time in the life of this city. The Cathedral is in a position in which we are ready to support the growth of this city now. [We are] present to encourage cultural development and to encourage young children, young people, to see other choices in life, to see there are other opportunities that are available to them.”

— Karin Hamilton is canon for mission communication and media for the Episcopal Church in Connecticut.