[Episcopal News Service –Terrier-Rouge, Haiti] On a recent February morning a young Haitian man riding high on a John Deere tractor tilled the fields, readying them for the first planting of the year at the St. Barnabas Center for Agriculture, an Episcopal college located on 475 acres of fertile coastal plain in northern Haiti.

As the tractor turned over the dark, clay soil, preparing it for planting, two young men worked to patch a crack in a cement water tank, two others pulled weeds from a carrot patch, and another two used blue and green plastic watering cans to hand-water beets, carrots and leafy greens growing in test plots and the seedlings coming to life in the greenhouse. Another young man drove cattle across the back of the property, while others continued to clear more land for the tractor and future planting. 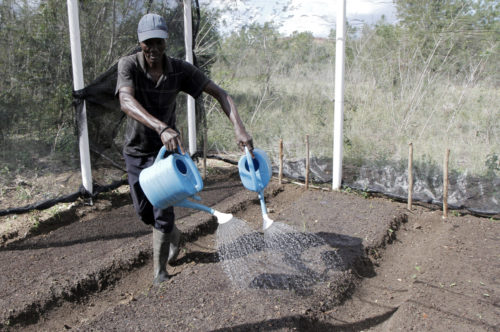 On a February day, a worker hand watered the seedlings in the greenhouse at the St. Barnabas Center for Agriculture in Terrier-Rouge, Haiti. Located in the country’s north on the coastal plain, the 475-acre school is 1.5 miles from the Atlantic Ocean. Photo: Lynette Wilson/Episcopal News Service

Meanwhile, students dressed in matching polo shirts with big block letters, “CASB” for the French “Centre D’Agriculture St. Barnabas,” written across the back, were studying in the classroom.

The beginning signs of abundant life after a period of financial hardship and drought were everywhere; it was a $100,000 grant from the Episcopal Diocese of Long Island in 2014 that helped St. Barnabas begin its revitalization. 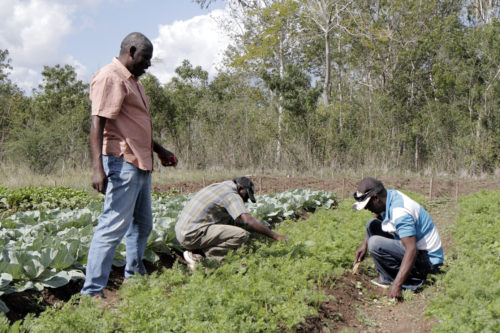 Etienne Saint-Ange, coordinator of field operations, talks with workers weeding carrots in the test plot, where plants are being tested for their viability. Everything grown at the school is grown organically. Photo: Lynette Wilson/Episcopal News Service

For a decade the St. Barnabas Center for Agriculture operated without financial support, yet has continued in its mission to train agricultural technicians. Half the population works in agriculture, but a majority of Haitians lack food and 30 percent of all children suffer from malnutrition. It was Saint-Ange and other dedicated staff members that kept the school running, living off the produce grown in its fields.

“The college leaders were the ones who kept it going from 2005-2014,” said Dan Tootle, an Episcopal Church Volunteer in Mission who serves as St. Barnabas’ program manager. In December 2015, faculty received seven months of back pay, a small amount of the $140,000 they are owed. “That’s not a show stopper because the people who were able to sustain this place now have a sense of hope,” said Tootle. 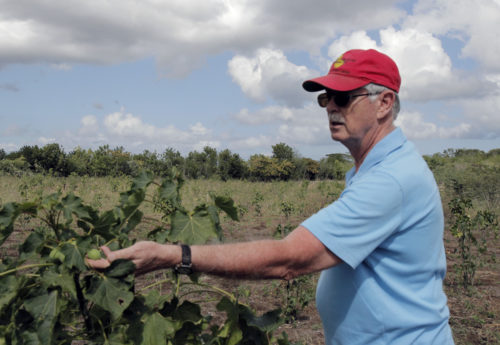 Dan Tootle, an Episcopal Church Volunteer in Mission, has worked diligently on the St. Barnabas’ revitalization plan, which is intended to turn the agriculture college into a regional center for agriculture and economic development. Photo: Lynette Wilson/Episcopal News Service

Tootle, 74, has served as a missionary to Haiti since 1999, when St. Martin’s-in-the-Field in Severna Park, Maryland, sponsored him. He became an Episcopal Church-appointed Volunteer in Mission in 2013, and has since focused on St. Barnabas, working on a five-year, $11.7 million revitalization plan that will modernize the college and transform it into a regional center for agriculture and economic development. It will also employ more than 180 people.

“We took a hard look at the college to determine what it would take to revitalize this institution,” said Tootle, scrolling through the 35-page, comprehensive master plan, a scaled down version of the full 76-page study. “It was not just a matter of restoring it to what it was doing in the past, but moving it forward into what’s needed in the 21st century, beyond just the uses of traditional Haitian agriculture.”

Ultimately, the college will be self-sustainable and able to provide assistance to other diocesan institutions.

Now in its fifth iteration, including feedback from regional stakeholders and a full staff build out, the first 2.5-year phase includes construction of new academic facilities and preparing the land for proper drainage and access, as well as other foundational work. The second 1.5-year phase includes the infrastructure needed to raise and process animals, as well as establishing a regional agricultural support center. The third and final phase includes building a dormitory for 250 residential students, and the remaining administrative and support buildings. Other plans are to partner with FreshMinistries on aquaponics, establish orchards, and grow plants like sisal specifically to sell to processors. 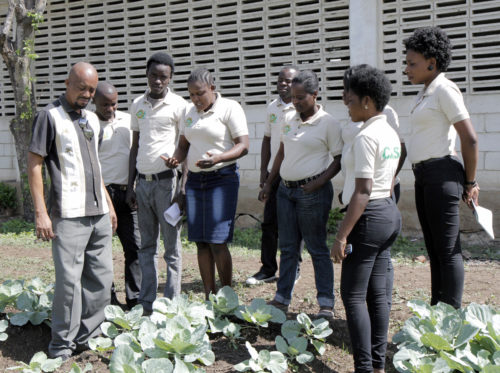 The training that students receive at St. Barnabas is equivalent to that of students attending a community college in the United States, said Tootle, adding that it equips them to move directly into agribusiness and farming operations. As the curriculum evolves, he added, students will be encouraged toward entrepreneurship, and given the resources to help them along the way.

Established as a partnership between the Episcopal Diocese of Haiti and the Presbyterian Church USA in 1984, St. Barnabas gained a nationwide reputation for educational excellence graduating some 30 classes over the years.

“Young people from all over the country come here to be trained as agricultural technicians,” said Yves Mary Etienne, an economist and St. Barnabas graduate who joined the faculty in its early years and has stayed on. 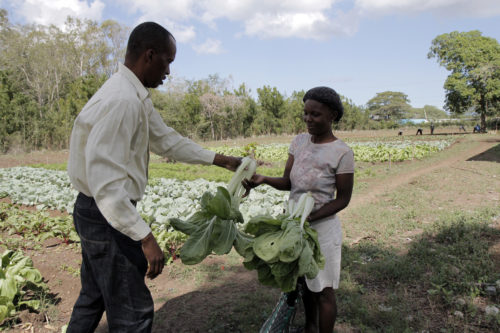 Yves Mary Etienne, an economist, pulls bok choy from the test plot and gives it to a woman from the community to sell at a local market. Photo: Lynette Wilson/Episcopal News Service

“St. Barnabas was created to further train farmers that couldn’t afford to go to school,”Etienne said in Creole through an interpreter, adding that students typically returned home, sharing what they’d learned for the benefit of the community. “St. Barnabas is not only for the north and the northeast, but educates students from around the country.”

In Haiti, it’s important that job seekers have references, said Merlotte Pierre, who has served as St. Barnabas’ secretary and a French grammar teacher since 1997. A certificate from St. Barnabas often stands alone, she said, also in Creole through an interpreter. 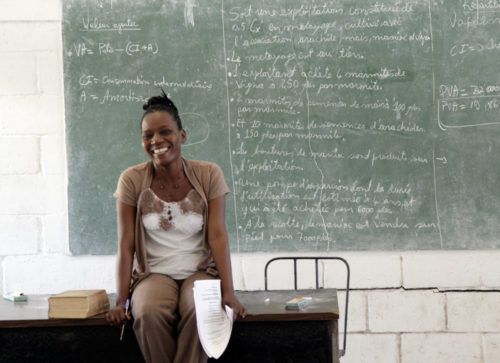 For students like Jonas Bien-Aimé, 22, who wants to become an agricultural expert, and Jouveline Pericles, 21, whose favorite subject is soil conservation and who someday would like to work for a nongovernmental organization, St. Barnabas provides the training, education and skills to move into such jobs. St. Barnabas’ students learn sustainable agricultural practices; all crops are grown organically, fertilized with compost rather than chemical fertilizers, and water and soil conservation are high priorities.

St. Barnabas is one of two trade schools in the northern region of Haiti belonging to the Episcopal Diocese of Haiti – the other is Holy Spirit in Cap-Haïtien that trains students to works as plumbers, electricians and mechanics. Across the diocese, which has the most people in the Episcopal Church, education is a focus. The Diocese of Haiti operates more than 250 primary and secondary schools across Haiti that still is recovering from the magnitude-7 earthquake that devastated the country, killing hundreds of thousands and displacing more than 1.5 million people in 2010. 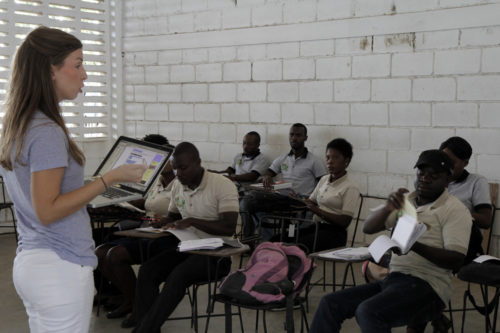 Eliza Brinkley, a Young Adult Service Corps missionary from the Diocese of North Carolina, teaches English to students at the St. Barnabas Center for Agriculture. In addition to studying agriculture and agriculture techniques, students study English, French, economics and other general education topics.

In the aftermath, governments and international relief agencies committed billions of dollars in aid to rebuild the Caribbean nation, long considered the poorest in the Western Hemisphere. More than five years later, many of the NGOs are gone and Haiti remains one of the poorest countries in the world. The Episcopal Church, though, has stayed the course and has committed to rebuilding the diocesan institutions destroyed near the earthquake’s epicenter near the capital, Port-au-Prince, in the south. The Episcopal Church’s Development Office has led the rebuilding effort.

“Along with rebuilding Holy Trinity Cathedral and St. Vincent’s School for the Handicapped, St. Barnabas is a priority for the Development Office because its existence will strengthen and support the mission and ministry of the diocese,” said Tara Elgin Holley, director of development for the Episcopal Church. “Furthermore, the revitalization of the college and the 475 acres it sits on directly addresses the Fifth Mark of Mission, ‘to strive to safeguard the integrity of creation and sustain and renew the life of the earth.’ ”

Despite having half the country’s 10 million people involved in farming, Haiti imports half its food, much of it from its neighbor, the Dominican Republic.

“Growing hundreds of acres of crops that can be harvested and sold locally is an exciting prospect not just for the students of St. Barnabas, but for the region,” said Holley. “Teaching young people from all over Haiti to be agriculture technicians and small business owners will help create a brighter future for many. And the income from the sale of crops will allow the college to support its own operational budget and make its ongoing existence sustainable.”

The momentum for St. Barnabas’ revitalization “had been present but dormant for some time,” said Tootle. 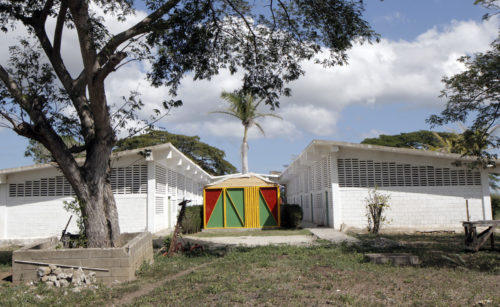 The St. Barnabas Center for Agriculture is located on a major fault line. The school has built temporary classrooms and administrative buildings since the original building is vulnerable to collapse should a seismic event occur. Photo: Lynette Wilson/Episcopal News Service

The gift from the Diocese of Long Island was part of a tithe, said Bishop Larry Provenzano.

The diocese sold church property in downtown Brooklyn, and before investing the proceeds, made more than $2 million in grants to domestic and international ministries.

“We have a large Haitian population in the diocese and we’d been hearing about the work in Haiti,” said Provenzano, adding that supporting St. Barnabas was an easy decision that also fit with the diocese’s commitment to an “ecological theology.”

In addition to support from Long Island, St. Barnabas has received support from others, includingConsortium of Endowed Episcopal Parishes, the Diocese of New York and the Diocese of California. With the support of California Bishop Marc Andrus, Volunteer Missioner for Haiti Davidson Bidwell-Waite and his husband, Edwin Bidwell-Waite, have spearheaded efforts to raising money for scholarships, and in April will be sending a group of students to St. Barnabas to help with planting.

As St. Barnabas continues on its path to revitalization, the faculty and students are looking to create partnerships with individuals, parishes, and dioceses that are interested in environmental stewardship and sustainable development as well as gardening, farming, animal husbandry, and beekeeping, said Holley. “Partnerships are what will help St. Barnabas to grow and thrive … as both an educational institution and a regional resource center for agriculture technology.”

For more information on how you, your parish or your diocese can get involved, click here.