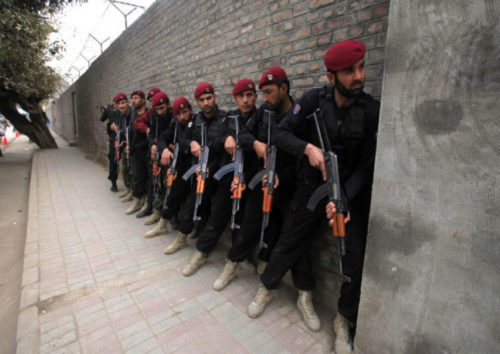 Security forces carry out an anti-terror exercise at the Diocese of Peshawar’s Elizabeth Girls High School. Photo: The Frontier News

[Anglican Communion News Service] Security forces in Pakistan have conducted a full-scale security exercise at the Diocese of Peshawar’s Elizabeth Girls High School following terrorist attacks at other educational institutions in the area. The exercise at the school, the first educational institute for women in the Province of Peshawar, was part of a general review of security at schools which has seen 230 educational facilities closed because of inadequate security.

Earlier this year, terrorists launched a gun attack on the Bacha Khan University in Charsadda, killing more than 35 students and staff. “Now, they have publicly announced that they will carry out their attacks on the educational institutions and worship places and kill the innocent [and] vulnerable people,” the Diocese of Peshawar’s Frontier News reports.

The “level one” exercise at Elizabeth Girls High School was conducted by Special Combat Police along with Elite and Anti-Terrorist Forces and involved dozens of policemen and officers from various security agencies.

The exercise was not in response to an attack at the school, but was designed to create awareness about how to act and behave and in the event that the school is attacked by terrorists. It helped to formulate escape plans and safety measures and identify weak spots which are now being strengthened. It was also used to train the school’s own security guards who will have to attempt to hold back any militants during an attack until help from the security forces arrives.

Attacks on educational facilities marks a change in tactics by terrorist groups. Attacks on military installations and convoys resulted in the trained security forces killing hundreds of militants. After taking the fight to terrorist hideouts, the terrorists dispersed and took refuge in local communities where they carried out attacks by planting bombs with timer devices and also suicide bombings in bazaars, shopping centers and malls, bus stops, airports and worship places. “Not a single spot is guaranteed to be safe anymore,” Frontier News reports.

Security has been stepped up in and around Peshawar with military and paramilitary check points across the region. Peshawar, once called “the city of flowers,” now has more guns than flowers and the area resembles a large military garrison, Frontier News reports, saying that the situation now is “guns for security and flowers for the graves.”

The security measures being imposed by the government include the construction of eight-foot-high boundary walls topped with razor wire around educational and other vulnerable institutions. In addition, walk-through gates, barriers and CCTV cameras are also being installed.

Institutions have been advised to provide their own armed security guards. There are 68,000 schools in the Province of Peshawar and 64,000 police guards; so it is impossible for police themselves to provide permanent security at the schools and educational institutions.

The institutions’ security officers have been given official training in combat and the use of weapons.

“All the Christian educational and other institutions have already taken the so-called security measures but they are highly inadequate,” Frontier News says. “The arms and ammunition, security cameras, walk-through gates, barriers and the armed guards are an expensive commodity” and far beyond the reach of poor and highly vulnerable Christian communities.

“In God we trust, kindly pray for the peace and security in Pakistan.”