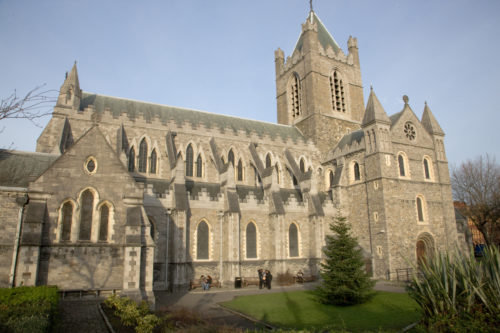 Christ Church Cathedral Dublin, along with six parish churches, will have to remain closed on Easter Day as they are within a security cordon put in place for events to mark the centenary of the Easter Rising, a significant event in the journey towards an independent Irish state. Photo: William Murphy / FlickR

[Anglican Communion News Service] Dublin’s Anglican Cathedral and six city center churches are being forced to close on Easter Day as a result of a safety cordon being put in place by security officials because of events being held to mark the centenary of the Easter Rising, which eventually paved the way for the creation of an independent Irish nation.

Up to half a million visitors are expected to descend on the city on the day and security officials have imposed a ban on all vehicles entering Dublin city center from 6 a.m. to 8 p.m. The Irish police, the Garda Síochána, have asked that the front gates of Christ Church Cathedral remain locked for the day. The clergy have been told that “there will be no ready access to their churches on that morning.”

Archbishop of Dublin Michael Jackson has met with clergy from the affected parishes and together they are putting plans in place to move their public services to parishes outside the cordon, while allowing for individual clergy members to say the Daily Office in his or her church on Easter Day “in order to avoid a break in the witness of each church.”

“This decision was made without consultation with the dioceses and there is a considerable sense of disappointment and sadness at this, but the church’s priority now is to find a way of offering worship on the most significant day in the Christian calendar,” a diocesan spokesman said.

“The archbishop and clergy most affected by this in the parishes of the diocese in the city center recognize the logistical difficulties in catering for between 350,000 and 500,000 visitors to the city on the day. They are also acutely aware of the health and safety issues involved in accessing the churches and the diocesan cathedral where Easter Day worship normally occurs when such large crowds are expected to be on the streets of the city to view the parade.

“The archbishop and clergy of the inner city communities have sought to find an accommodation which facilitates the primary provision of public worship and does not cause offence or undue difficulty to the organizers of the historic parade.”

Jackson, who would normally worship in Christ Church Cathedral on Easter Day morning, said: “People will, understandably, be upset not to be able to worship in their parish churches” on Easter Day.“We are making this decision with regret but in recognition of the fact that people for whom we have a duty of care will find it very difficult to gain access to city center churches on Easter Day.

“I look forward to celebrating Easter with the congregations of Christ Church Cathedral and Sandford Parish Church on Easter morning. After that I intend to take up the invitation of the Government to attend the Ceremony of Commemoration at the General Post Office [the center of the Uprising] on what is a very significant day in the history of the State.”

The majority of people who worship in Dublin’s city center churches do not live within the traditional parish boundaries. Churches outside the cordon, which will remain accessible on Easter morning, are inviting the clergy and congregations from those churches that are not accessible as a result of the restrictions to join them for worship.

The restrictions do not apply to other arrangements for worship during Holy Week across the city center churches, including the Easter Vigil and First Eucharist of Easter at Christ Church Cathedral on Easter Eve.