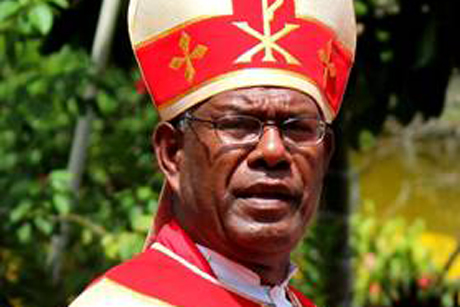 [Anglican Communion News Service] The Rt. Rev. George Takeli, bishop of Temotu, has been named as the Anglican Church of Melanesia’s new archbishop and primate. Takeli will be enthroned on April 17 at the Saint Barnabas Provincial Cathedral and will also become bishop of the Diocese of Central Melanesia. He succeeds Archbishop David Vunagi who retired in September 2015.

Takeli’s appointment as archbishop was made by the Provincial Electoral Board of the Anglican Church of Melanesia. They had been meeting at Tetete Ni Kolivuti, the recently built conference hall of the Community of the Sisters of the Church at Tenaru area in east Honiara.

Born in Suholo village on Ulawa Island in the province of Makira Ulawa, 56-year-old Takeli was ordained to the priesthood in 1995 and consecrated as the fourth bishop of Temotu in August 2009.

Takeli said that his main priorities as Archbishop of Melanesia will be to establish an active missionary church alongside a strong and effective administration system and a strong investment division for the Anglican Church of Melanesia.