The logo that the Church of England will use for events marking Queen Elizabeth II’s 90th birthday on 21 April. Photo Credit: Luke Sallinger

[Anglican Communion News Service] The Church of England has unveiled the logo that it will use for its celebrations of Queen Elizabeth II’s 90 birthday, after running a design competition through church schools. Ten-year-old Lucas Salinger from Potten End C of E Primary School in Hertfordshire, part of the St Albans Diocese, drew the winning design, which was selected from more than 1,000 entries.

It depicts a circular crest bordered by children holding hands. It is dissected by a cross, reminiscent of the one that hangs above the altar at Holy Trinity, the village church. It has two candles and the number 90 in the quarters; and is topped by the Royal Crown and the E-ii-R insignia, representing in Latin Elizabeth Regina II – Queen Elizabeth II.

“I feel amazed that my design was chosen,” Luke Salinger said. “I feel lost for words!”

His school’s head teacher, Andrew Morris, said that he was proud that the winning entry came from one of his pupils. “Lucas is a thoughtful and talented young man who thoroughly deserves recognition for his hard work on the logo,” Mr Morris said. “I so am pleased that Lucas has incorporated the cross design that hangs in our church in Potten End.” 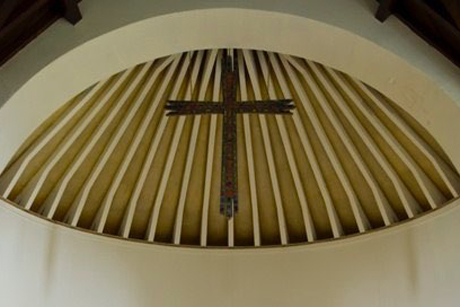 The school’s 199 pupils, aged from four to 11, will be celebrating the Queen’s 90th by studying her life and having a street party to celebrate.

The Queen’s actual birthday is on 21 April; but it is traditional for public celebrations of the Monarch’s birthday to take place on an “official birthday” in the Summer. The exact date varies throughout the Commonwealth. In the UK, it is marked on a Saturday in June. This year it will be marked on 11 June and there will be a weekend of celebrations from Friday 10 June through until Sunday 12 June.

Official events taking place on the Official birthday weekend will including a thanksgiving service at St Paul’s Cathedral, a Birthday Parade on Horse Guards Parade and a street party in The Mall.

It is envisaged that church events will be integrated into local community celebrations that take place that weekend.

“The birthday celebration weekend offers churches the opportunity to share local stories from the last 90 years through exhibitions and oral histories, securing these memories for future generations,” a C of E spokesperson said.

The chair of the C of E’s Church Buildings Council, former MP Sir Tony Baldry, said: “It is wonderful that the visual marker that will unite these events has been designed by a young pupil at a Church school. Many churches have already begun making plans. We hope that our web hub on the ChurchCare website will be a source of inspiration and support in the lead up to June.”

Luke Sallinger with his winning design which will be used in the C of E’s celebrations for Queen Elizabeth II’s 90th Birthday
Photo: Church of England

Special prayers have been written and approved by The Queen for services marking her birthday. The Queen is Supreme Governor of the Church of England.