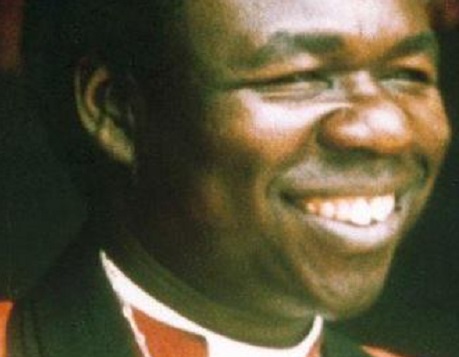 [Anglican Communion News Service] The Archbishop of Uganda, Stanley Ntagali, has called on Christians to observe next week’s observance of martyred Archbishop Janani Luwum – for the first time a public holiday in Uganda – as a day of prayer for the national elections which take place two days later.

Archbishop Janani Luwum was the third Archbishop of the Church of Uganda, Rwanda, Burundi, and Boga-Zaire. On 16 February 1977 he was arrested on false charges by former President Idi Amin and was shot and killed later that day in an attempt to silence religious leaders who challenged Amin on a number of issues.

“Archbishop Luwum’s assassination is considered a turning point in Uganda’s history,” a spokesman for the Province said. “For the international community, a line had been crossed and they were jolted into an awareness that Amin and his regime had to go. It set the stage for the Tanzanian-led campaign that removed Amin from power two years later.”

Luwum is commemorated as a martyr in many parts of the Anglican Communion on 17 February each year. A Martyrs Chapel at Canterbury Cathedral was dedicated to him; and in 1998 a statue of Janani Luwum was unveiled outside Westminster Abbey. The anniversary of Luwum’s assassination has also long been commemorated in Uganda. Last year, at the first internationally focused commemoration, Archbishop Ntagali asked the government to declare 16 February a public holiday in honour of Archbishop Luwum, which they have done.

Now, Archbishop Ntagali is calling on all Christians to observe the new public holiday as a day of prayer for the national elections. The country will vote on 18 February in presidential, parliamentary and local ballots.

Churches around the country will hold special services on next Tuesday. Archbishop Ntagali will preach at a special service in Luwum’s birth-village, Mucwini in the Kitgum District. President Yoweri Museveni has been invited as guest of honour.

“Our theme is ‘Jesus our Peace,’” Archbishop Ntagali said. “It is taken from Ephesians 2:14, which says, ‘For [Jesus] himself is our peace, who has made the two groups one and has destroyed the barrier, the dividing wall of hostility.’

“I thank God that we have the opportunity two days before casting our ballot to slow down, pause, and remember the cause of ‘God and my country’ for which Archbishop Janani Luwum died.

“We need this reminder of the bigger issues before us of harmony and truth, unity and respect for one another, and a non-violent and peaceful Uganda. This is what Archbishop Janani Luwum demonstrated in his life.”

Christians throughout Uganda are being urged to make a pilgrimage to Mucwini on Tuesday to join the commemoration. Those unable to attend are being asked to attend observances in local churches.

“Whether at church or at home with your family, this year’s commemoration of Archbishop Janani Luwum will focus on one thing that was close to his heart – a non-violent and peaceful Uganda, and a Uganda that respects the life and dignity of every person,” a provincial spokesman said.

“Archbishop Janani Luwum served as Archbishop during Idi Amin’s Presidency. He, along with other religious leaders, appealed to Amin to stop the killings of innocent people, to govern the country with justice, and to respect the authority entrusted to them by God. In return, Archbishop Janani Luwum was accused of treason, arrested, and assassinated.

“Because of his Christian convictions in confronting oppressive powers and his refusal to recant his appeal for life and justice for the people of Uganda, he was killed. Not only was his life a witness and testimony to the Gospel and the power of Jesus Christ, but his death was also such a witness. Because of that, he is considered a martyr.”