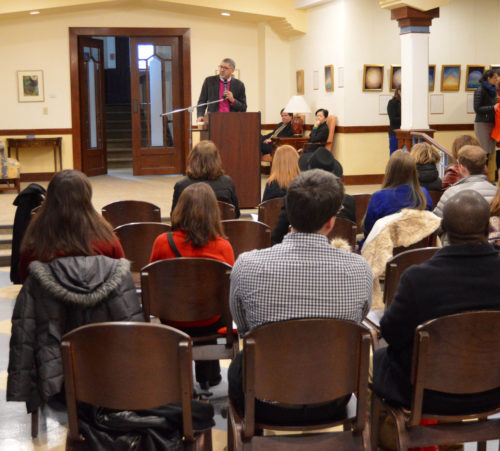 “My wife, Beth, who is from Jamaica, just recently became a citizen, so I get how important today’s naturalization ceremony is for all of you. Despite what you may read and hear in the news, please know that you are welcome, that I welcome you,” said Wright.

The immigrants and New American Pathways volunteers then took to the hallways of the State Capitol to lobby for welcoming policies. To learn more about this successful resettlement program click here.

Next, Wright visited Gateway Center, a 10-year-old program serving those in Atlanta experiencing homelessness. Gateway Center founding director Vince Smith took Wright on a tour of the 110,000 square foot center which use to serve as the Atlanta City Jail.

“Vince, your work at Gateway is an example of the work that we as Christians are given to do by our Lord,” said Wright. “To love and serve our neighbor’s, especially those who have the least. Thank you, thank you!”