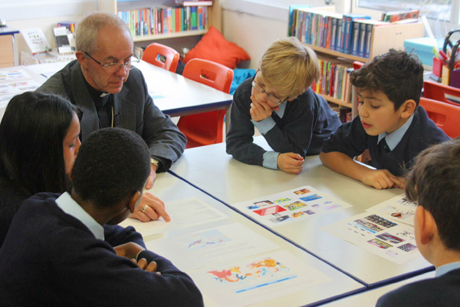 [Anglican Communion News Service] The Church of England has launched a savings scheme aimed at helping primary school children to learn about saving while building up a small nest-egg. The LifeSavers programme has been piloted in schools across south-east London, Nottinghamshire and Bradford and is now being rolled out across the country.

The LifeSavers scheme has been created by To Your Credit – an initiative of the C of E’s task group for responsible credit and savings – and will be run in partnership with Young Enterprise and local credit unions. The pilot was supported by Virgin Money and the C of E has secured a government grant to roll out the scheme across the UK.

It encourages children to save small, regular amounts of money and is combined with teaching resources to help children understand the values that underpin this kind of approach to money.

The Archbishop of Canterbury, Justin Welby, praised the new savings-club, saying it was “at the core of the church’s mission at the heart of vibrant and caring communities.”

After visiting St Bartholomew’s Church of England primary school in south London this week where he met children who were part of the pilot scheme, Archbishop Justin said: “The children I spent [the] morning with weren’t just going through the motions. This wasn’t just another thing to sit through in class. They were inspired. It was really sinking in.

“Another great thing to see was how the teacher was using the programme to bring in lots of other parts of the curriculum – basic numeracy, of course, but also emotional intelligence, and the whole idea of service, of doing things for other people. It’s a really rounded educational process.”

He continued: “Now, on the surface this might sound like a modest gesture. Not a bit of it. The programme is certainly down to earth and extremely practical, and rightly so. Yet it aims at the heart of some of the deepest, most painful and most intractable problems that families can face, and seeks to help put people on a new footing – a footing that Jesus would recognise as healed and renewed.

“The way that money is dealt with is about human flourishing at its deepest level – and it is absolutely right that the church is helping to try and break this cycle before it affects another generation. Meanwhile, on a practical level it makes perfect sense for the Church of England, which is involved in the education of a million children around the country, to be using our particular platform to make this contribution.

“We now know, thanks to academic research, that our thinking and habits around money are formed much earlier than we’d ever assumed. And they are usually formed subconsciously as you observe your parents or guardians, and absorb whatever the culture of your home life happens to be. Both traditional media and social media also play their part.

“So what we are doing with LifeSavers is providing serious, early formation of those values of how we handle money – so that children are given the opportunity to learn that it can and should be a servant, not a master. Many things go to make full and contented lives, but without doubt one of them is not being trapped in the lonely, frightening prison of debt.

“As a society we’ve become overly accepting of approaches to money that mean it ends up running people’s lives; we want to see people running their money.”