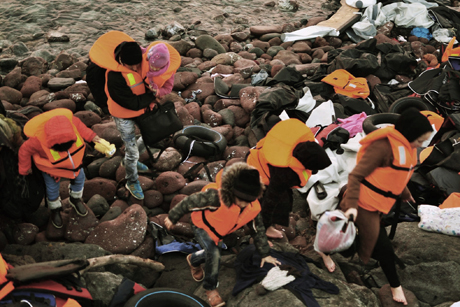 Refugees arriving on the shore at the lighthouse on the Greek island of Lesbos. Photo: Max McClellan/United Society

[Anglican Communion News Service] Ten children are amongst 26 Kurdish refugees from Iraq who have been confirmed to have drowned off the coast of Samos Island in Greece yesterday, the Anglican mission agency United Society (formerly USPG) say.

The 26 dead – including five boys and five girls – are amongst more than 200 who have drowned so far this year as they attempted to cross from Turkey. Despite the winter weather and dangerous seas, refugees are continuing to make the perilous journey to the Greek islands in their thousands.

“For those refugees who arrive safely, the medical issues are numerous,” the United Society’s Max McClellan, who is in Greece assisting the Diocese in Europe and ecumenical partners as they respond to the crisis, said. “Beside routine maladies and medical conditions, the refugees suffer from conditions brought on by their arduous journeys and cramped living conditions, like scabies.”

The Anglican Chaplaincy in Greece, in partnership with United Society is supporting the work of the Greek medical organisation Medical Intervention (MedIn) on the island of Samos. Together, they are providing medical help, with the church also helping to pay for medicine, soap, blankets and sleeping bags. MedIn also provides baby milk to those with young infants.

“Urgent action to support refugees is vital,” Max McClellan said. “While countries disagree over their responsibilities and their response, refugees are dying.

“As was noted during a joint statement issued by the World Council of Churches and the UN: ‘It is of urgent importance that safe and legal passage for refugees coming to Europe be expanded and facilitated. Closing national borders to refugees is not a solution because it only shifts the responsibility to the next country.’”

He said: “Our thoughts and prayers are with those who lost family members off the coast of Samos yesterday.”

The United Society’s director of global relations, Rachel Parry, added: “This tragic accident serves to further underline the shocking situations that are forcing people to make these inherently risky journeys. Desperate families choose to travel to Europe knowing the risks, but they have no other option.

“While governments are depriving refugee families of assets and closing borders, the loss of these Kurdish lives is yet another appalling tragedy; may it be a reminder that motivates governments into action, rather than falling on closed minds, cold hearts and unmoving policies.

“Change must happen, and happen fast.”