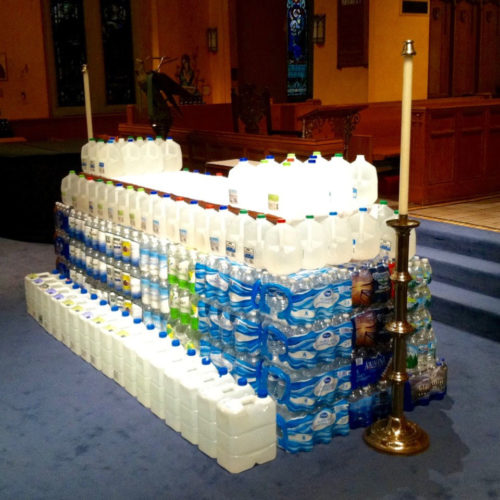 Over the last two weeks, Flint’s water crisis and the state’s failure to respond, have dominated mainstream headlines, with President Barack Obama declaring a “state of emergency,” and last week Governor Rick Snyder using his State of the State address to apologize to Flint residents.

It was the persistence of community groups, like Water You Fighting For and Concerned Pastors for Social Action, who organized protests, press conferences and publicity for more than a year and a half, that brought the crisis to the attention of local and state officials, explained the Rev. Dan Scheid, rector of St. Paul’s Episcopal Church.

“This is a social-justice issue. The poor and marginalized simply were not listened to by those in power, they were repeatedly told the water is fine, the water is fine, and at some point they realized that the water wasn’t good and it’s going to take additional reporting and digging to find out who knew what when,” he said. “October 1st [2015] is when the governor said he knew, and that’s when things started to change.”

In April 2014, under the leadership of an emergency manager and in an effort to save $5 million, the city’s water supply was switched from Lake Huron via Detroit’s municipal water system to the Flint River, a more corrosive source that caused lead leaching from aging pipe infrastructure to contaminate resident’s water. (The city of Detroit has had its own water issues.)

“Furthermore,” he said. “There is evidence of falsification of water tests, withholding of test information, and coercion of state and local officials to ignore disturbing water test results.”

Earlier this month, the regional EPA official resigned over the crisis.

Almost immediately following the switch, residents began to complain about the water’s color, taste and smell, and the skin irritation caused by bathing in it, yet government officials maintained the water’s safety. It was the efforts of community leaders and pastors, who spoke up for the city’s majority black and impoverished residents, that caught the attention of physicians and academics who conducted studies countering the government’s claims. Of the city’s 100,000 residents, 9,000 are children under age 6, the population most vulnerable to the cognitive and developmental delays associated with lead poisoning.

“As for the long-term health, educational and psychological effects on the generation of babies, toddlers and preschoolers, we don’t know what that will look like, how will that be measured and attended to,” said Scheid.

Scheid became the rector of St. Paul’s in May of 2015, after serving as rector of St. Augustine of Canterbury in Benton Harbor, another Michigan city that has been under emergency management.

St. Paul’s Episcopal Church in downtown Flint served as a water distribution point, and with grant assistance from the dioceses of Eastern and Western Michigan and donations from parishes across lower Michigan, partnered with the Food Bank of Eastern Michigan, the soup kitchen at St. Andrew’s Episcopal Church, on the city’s east side, the north side’s Christ Enrichment Center and other organizations to make sure the city’s residents had access to clean water.

With a $5,000 grant from Episcopal Relief & Development, St. Paul’s, channeling the money through the United Way, was able to replace water filters in schools, reaching 25 percent of the student population.

Moving forward, one of the ways churches and other community-based organizations are looking to respond to residents’ needs is by making sure they have access to healthy, fresh foods. Evidence has shown that foods rich in iron and vitamin C can ameliorate the effects of lead poisoning, said Scheid.

“The issue is that much of the food that comes through the food bank, fresh stuff, is on the verge of spoiling and getting appropriate food from the food bank is a challenge,” said Scheid, adding that Flint is a food desert. “This is something we are looking at, could we do something to address nutrition in a meaningful way, could we purchase top quality food for distribution to families.”

Another long-term issue is addressing residents’ spiritual and psychological needs.

“The trauma, the fear and the anger of the adults, parents and grandparents, knowing that you may have given your children contaminated water for months and months and the associated guilt,” said Scheid.

With a population less than 100,000, Flint, once one of the largest, most industrial cities in Michigan, now ranks seventh in the state. Sixty percent of the population is African-American; more than 40 percent live below the poverty line. Like Detroit, 60 miles south down Interstate 75, Flint has experienced a massive population decline and an eroded tax base.

“Flint is seen as poor and disposable and is largely populated by a demographic that remains voiceless and on the margins,” said Ousley.

It’s not just in communities like Flint where poor and marginalized citizens are without voice, it’s in cities, towns and rural areas across the United States. Aside from financial contributions, one way Episcopalians can stand in solidarity with Flint’s residents is to address issues of injustice and inequality in their own communities, said Scheid.

“The church has the moral and civil authority to lift those voices up; the church should take care of those issues in its own context,” he said. “That is one way to be responsive to what’s happening in Flint.”

Flint’s water crisis laid bare the city’s existing social and economic justice issues, and revealed the impact of citizens being stripped of their democratic rights. At the start of the water crisis, Flint was under emergency management appointed by and reporting directly to the governor, thereby bypassing the authority of locally elected officials. Five Michigan cities (Detroit, Flint, Inkster, Benton Harbor and Highland Park), all with majority African-American populations, have been under emergency management at one time or another.

“A further racial justice dimension to address is that at one time state-appointed managers have replaced democratically elected leaders in cities which together are populated by more than half of all African-Americans in the state,” said Ousley

-Lynette Wilson is an editor and reporter for Episcopal News Service.