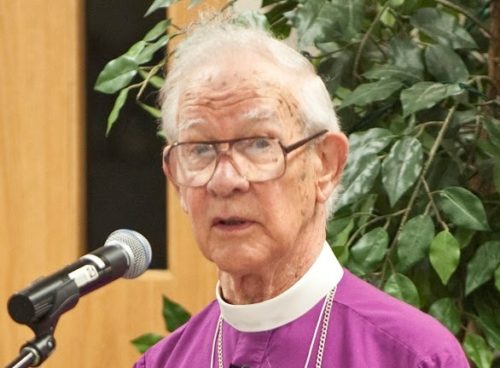 He was born on March 28, 1922 ,in Philadelphia, Pennsylvania. He attended Temple University before matriculating at Philadelphia Divinity School, where he earned a ThB, a ThM, and a ThD in New Testament. He was ordained as a deacon in 1946 in the Episcopal Diocese of Pennsylvania, and ordained as a priest later that same year in the Episcopal Diocese of Delaware. He served as Tutor of Greek and New Testament at Philadelphia Divinity School while also serving as Curate at Church of the Holy Trinity at Rittenhouse Square in Philadelphia. He subsequently served as assistant rector of Immanuel Episcopal Church in Wilmington, Delaware, and as rector of St. Peter’s Episcopal Church in Smyrna, Delaware. In 1950 he moved to Wisconsin to begin serving at Nashotah House, where he was professor New Testament and Ascetical Theology; his tenure as the 13th dean and president of Nashotah House ran from 1963 to 1973. He was elected as bishop of the Episcopal Diocese of Quincy and was consecrated on September 8, 1973; he served as bishop until his retirement in 1987, and thereafter continued to provide episcopal oversight for a number of congregations. He was the author of The Holy Eucharist Rite Two: a Devotional Commentary (1976) and A Lifetime Road to God (1977). In 1955 he married Mary Russell, who predeceased him; he is survived by his three children, Mary, Rebecca, and Brad.

A Requiem Mass for Bishop Parsons will be held at St. Paul’s Episcopal Church (343 Buena Vista Ave., Pekin, Illinois) on Saturday, January 9, 2016. Visitation will be from 1 p.m. until 3 p.m. and Holy Eucharist will be celebrated at 3 p.m.

The family requests that memorial gifts be dedicated to the Bishop Parsons Scholarship Fund at Nashotah House Theological Seminary, 2777 Mission Road, Nashotah, WI 53058 or on the Nashotah House website.