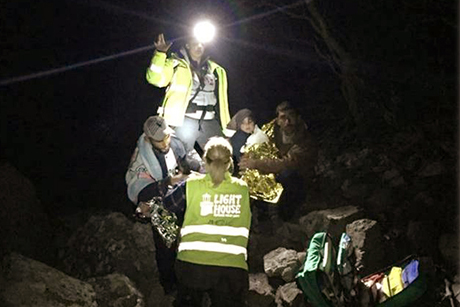 A night time rescue of refugees on the Greek island of Lesbos.
Photo: United Society

[Anglican Communion News Service] A dangerous “horror” location on the Greek island of Lesbos has been turned into a 24-hour reception center offering shelter, food and medical care to vulnerable refugees. The work has been carried out by the church-based Lighthouse Refugee Relief (LRR) agency using funds provided through the Anglican mission agency United Society’s Rapid Response Appeal.

The center is located in the Korakas area of north-east Lesbos, where hundreds of refugees are arriving daily by boat, tired, hungry and often traumatized.

The LRR is running the center at night while other organization operate it during the day. “The immediate effect of providing help to those arriving at night was obvious,” LRR volunteer coordinator Henry Hartley said. “Our presence meant security in the area was tighter, and slowly all the ‘opportunists’ left the area.

“Also, because of our night time presence, the teams during the day could start building infrastructure knowing that theft is no longer a problem. At present, the Korakas area is being looked after by LRR at night – with both medical and non-medical volunteers – and by CK Team and Migrant Aid Europe during the days.”

Hartley said that in the eight weeks since they arrived, “the Korakas area has been transformed from a horror story for anyone landing there to being welcomed and received by a dedicated team of volunteers and medics.”

The United Society used its donations to purchase a 4×4 vehicle for transporting refugees on rapidly deteriorating dirt roads, including emergency trips to hospital; as well as safety equipment, lighting and tents. They were also able to construct huts and a kitchen as well as daily running costs for things like petrol, firewood and food.

“There are huge needs, particularly concerning unaccompanied minors, pregnant women and the most vulnerable among the refugees,” the Church of England’s Suffragan Bishop in Europe, David Hamid, said. “Your generous donations to United Society will be put to excellent use.”

Hartley added: “In summary, the funding from United Society has been directly responsible for saving lives.”

The United Society partnered with the Diocese of Europe last year to establish the Rapid Response Fund as it worked ecumenically to reach out to refugees during the current crisis.