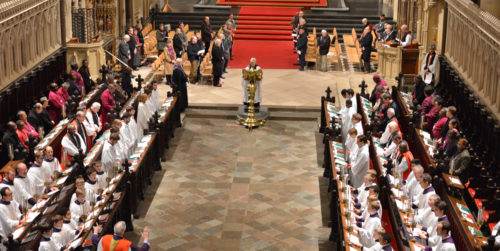 [Episcopal News Service — Canterbury, England] A majority of Anglican primates Jan. 14 asked that the Episcopal Church, for a period of three years, “no longer represent us on ecumenical and interfaith bodies, should not be appointed or elected to an internal standing committee and that while participating in the internal bodies of the Anglican Communion, they will not take part in decision making on any issues pertaining to doctrine or polity.”

Expressing their unanimous desire to walk together, the primates said that their call comes in response to the decision by the Episcopal Church’s General Convention last July to change canonical language that defines marriage as being between a man and a woman (Resolution A036) and authorize two new marriage rites with language allowing them to be used by same-sex or opposite-sex couples (Resolution A054).

An announcement posted on the Primates 2016 meeting website said that “the Primates agreed how they would walk together in the grace and love of Christ.”

“This agreement acknowledges the significant distance that remains but confirms their unanimous commitment to walk together,” the announcement, which includes the full text of the primates’ call, said. The announcement also said the agreement “demonstrates the commitment of all the Primates to continue the life of the Communion with neither victor nor vanquished.”

Before the Jan. 14 vote, Episcopal Church Presiding Bishop Michael B. Curry told the primates gathering Jan. 11-15 in Canterbury, England, that the statement calling for the sanctions would be painful for many in the Episcopal Church to receive.

“Many of us have committed ourselves and our church to being ‘a house of prayer for all people,’ as the Bible says, when all are truly welcome,” Curry said in remarks he later made available to Episcopal News Service. “Our commitment to be an inclusive church is not based on a social theory or capitulation to the ways of the culture, but on our belief that the outstretched arms of Jesus on the cross are a sign of the very love of God reaching out to us all. While I understand that many disagree with us, our decision regarding marriage is based on the belief that the words of the Apostle Paul to the Galatians are true for the church today: All who have been baptized into Christ have put on Christ. There is no longer Jew or Gentile, slave or free, male or female, for all are one in Christ.

Curry told the primates that he was in no sense comparing his own pain to theirs, but “I stand before you as your brother. I stand before you as a descendant of African slaves, stolen from their native land, enslaved in a bitter bondage, and then even after emancipation, segregated and excluded in church and society. And this conjures that up again, and brings pain.

“The pain for many will be real. But God is greater than anything. I love Jesus and I love the church. I am a Christian in the Anglican way. And like you, as we have said in this meeting, I am committed to ‘walking together’ with you as fellow primates in the Anglican family.”

The primates’ statement also asks Archbishop of Canterbury Justin Welby to appoint a task group “to maintain conversation among ourselves with the intention of restoration of relationship, the rebuilding of mutual trust, healing the legacy of hurt, recognizing the extent of our commonality, and exploring our deep differences, ensuring they are held between us in the love and grace of Christ.”

The announcement about the sanctions said that further comments would be made and questions answered at a 3 p.m. local time news conference Jan. 15.

The first two days of the gathering were given solely to setting the agenda for the week and focusing on whether the primates could reach an agreement on how to move forward despite their differences of opinion concerning theological interpretation and human sexuality issues.

A widely anticipated exodus of some conservative African archbishops has not come to pass and all but one primate remain at the table during the Jan. 11-15 meeting, committed to ongoing dialogue and discerning various options towards reconciliation. Archbishop Stanley Ntagali of the Anglican Church of Uganda quietly left the meeting on Jan. 12. He had said in a statement prior to the gathering that he would leave unless “discipline and godly order” were restored in the Anglican Communion. In a Jan. 13 letter to his church, Ntagali said he left because the Ugandan provincial assembly had resolved not to participate in any official communion meetings until that order was restored.

ENS learned from one archbishop that on Wednesday morning the primates took a vote that would have asked the Episcopal Church to withdraw voluntarily from the Anglican Communion for a period of three years. The vote failed by 15 to 20, although such a withdrawal is not in keeping with the processes of provincial membership as outlined in the constitution of the Anglican Consultative Council, the Communion’s main policy-making body. The ACC is already scheduled to meet April 8-20 in Lusaka, Zambia.

Archbishop Foley Beach, the leader of the Anglican Church in North America (ACNA), has been gathering with the primates for conversation throughout the week but not participating in any of the votes. Beach was invited by Welby in an effort to avert a boycott from conservative African archbishops such as the one that occurred at the last Primates Meeting in 2011. ACNA is composed largely of former Episcopalians who chose to break away from the Episcopal Church. Some African primates have declared their affiliation to ACNA.

By Wednesday afternoon, the agenda had moved onto other pressing issues affecting the Anglican Communion, such as relief and development work, and its response to war and conflict.

Curry, who was installed as the Episcopal Church’s presiding bishop and primate last November, is attending his first gathering of primates.

Following his election in June 2015, Curry said the Anglican Communion is as much about relationships and partnerships as it is about structure and organization. “We’ve got some work to do; we’ve got some Jesus work to do,” he said. “This world is crying out for us and it needs us, and the Anglican Communion is one way that God uses us together to really make this a better world.”

Primates are the senior archbishops and presiding bishops elected or appointed to lead each of the 38 autonomous provinces of the Anglican Communion. They are invited to the Primates Meetings by the Archbishop of Canterbury to consult on theological, social and international issues.