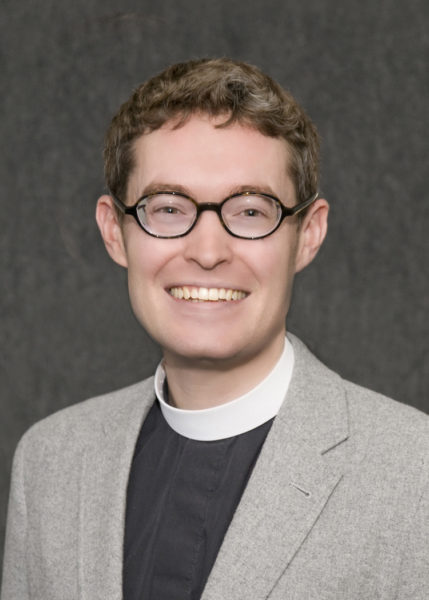 [Trinity Episcopal Cathedral press release] Following an 18-month search process to review 60 candidates, senior warden Jerry Petty announced January 10 that the chapter and vestry of Trinity Episcopal Cathedral in Portland, Oregon, had unanimously voted to call the Rev. Canon Nathan LeRud as the cathedral’s next dean. LeRud had previously been serving as the cathedral’s acting dean during the transition period.

A member of the cathedral’s staff since 2009, LeRud was hired by previous dean the Very Rev. William Lupfer to serve as canon residentiary, overseeing administrative staff and ministry organization. In 2012, LeRud was appointed canon for spiritual formation, assuming leadership of Trinity’s nationally-recognized adult education programs. When Lupfer was appointed rector of Trinity Church, Wall Street in 2014, LeRud was called to serve as the cathedral’s acting dean.

A fifth-generation Oregonian and native Portlander, LeRud is the son of a pastor and was raised and baptized in the Evangelical Church of North America. He holds a BA in English and Theatre from Whitman College in Walla Walla, Washington and an M.Div from the General Theological Seminary in New York City. Sponsored for ordination by the Episcopal Diocese of Spokane, LeRud was ordained to the priesthood in 2007. Before being called to Trinity he served as curate of Christ Episcopal Church in Ridgewood, New Jersey.

In a letter accepting the vestry’s invitation, LeRud wrote, “I’m excited and energized by the vision for our future that is already emerging. The people of Trinity are some of the most committed, creative and passionate folks I’ve ever known, and to be called as your next spiritual leader is humbling and thrilling.”

LeRud is married to the Rev, James Michael Joiner, assistant rector of St. Michael and All Angels Episcopal Church in Portland. Theirs was the first same-gender marriage conducted at the cathedral by Bishop Michael Hanley.

Trinity Episcopal Cathedral was founded in 1851 and was designated cathedral for the Episcopal Diocese of Oregon in 1993. Among the largest Episcopal churches in the region, Trinity identifies as a progressive congregation of 1800 members open to many points of view, but united in a commitment to spiritual formation, community outreach, and social justice.