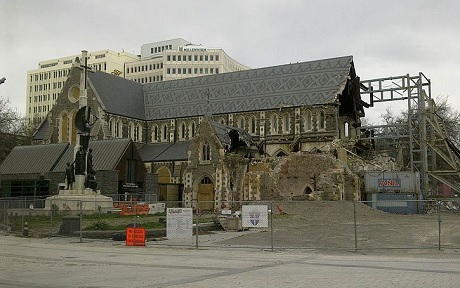 [Anglican Communion News Service] Christchurch Cathedral in New Zealand could be reinstated after a mediator reported that restoration work could leave the re-built cathedral “indistinguishable” from the one that was all-but destroyed by the 2011 earthquake. But the report says that the “costly and risky project” would be significantly more expensive and take much longer to build than a contemporary replacement.

There has been something of an impasse about which of the two options should be followed and the New Zealand government appointed lawyer Miriam Dean QC to mediate. Following the publication of her report, the Diocese of Christchurch said it would look again at the cost and feasibility of reinstating the cathedral. Further announcements are expected in April.

The report by Miriam Dean stops short of endorsing either option but,Anglican Taonga reports, “crucially brings to the negotiating table parties that have been at loggerheads over the cathedral’s fate for more than three years.”

“Miriam Dean QC and her team did an excellent job of assessing the positions of the parties involved and finding points of agreement. We are grateful for her hard work,” the Bishop of Christchurch, the Rt Revd Victoria Matthews, said, adding that the engineers and quantity surveyors involved were able to reach a large measure of high-level agreement on the engineering options and indicative costs of reinstating Christchurch Cathedral.

“The Anglican Diocese of Christchurch and the Church Property Trustees wish to move past the current deadlock to find a way forward to re-establish a cathedral in Cathedral Square,” Bishop Matthews said. “We want to support the city to move forward and we recognise the central importance of this building to many people in Christchurch.

“It is the calling of the church to minister to people; to serve the lost, the last and the least. As the body of Christ we use buildings, but we don’t exist for the sake of bricks and mortar.

“Therefore, comprehensive measures to ensure safety during deconstruction and reinstatement, and measures to achieve future safety including 100 per cent of the New Building Standard, as well as sufficient financial resources are essential.”

Further confidential discussions will take place between the government and diocesan officials on the question of safety and cost before further announcements which are expected in April.

In August 2013 a transitional “cardboard cathedral” was opened to serve the community of Christchurch.