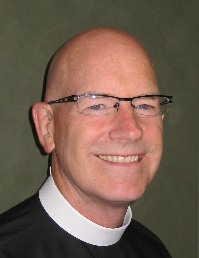 Kim McClain, president of the diocese’s standing committee, said Bell was one of three finalists from a pool of 16 applicants. A search committee narrowed the field down to three candidates.

McClain said, “All of the candidates had Eastern Oregon roots and experience and all were so well qualified. We would have done well with any one of the three.”

Bell’s background lends itself to his new position – he is a seventh generation Eastern Washingtonian, hailing from a long farming tradition, and his first Episcopal parish was in Ontario, Oregon, she said.

“Fr. Bell understands rural life in the Pacific Northwest. We think he will make a really good bishop,” McClain said.

Bell said he was raised Episcopalian and attended Whitworth College, a Presbyterian school in Spokane, Washington. As a young adult, his faith turned toward evangelical Christianity. He received a Master’s of Arts in Theology from Fuller Theological Seminary in Pasadena, California. and served as a Pentecostal minister. In time, he said, he returned to the Episcopal Church.

“I realized I wasn’t a fundamentalist,” Bell said.

Wanting to continue his ministry, Bell did his Anglican studies work at Seminary of the Southwest in Austin, Texas and completed coursework for a doctorate of Ministry from Seabury-Western Theological Seminary in Evanston, Illinois.

He was ordained priest by Bishop Rustin Kimsey and installed at St. Matthew’s Episcopal Church in Ontario in 1989. He said his experience with different spiritual paths is one of the strengths he brings to his new position.

“It broadened my spiritual understanding and my ability to work with Evangelical Christians – I have a deep appreciation for what they believe,” Bell said.

He said his vision for the diocese is to reinforce people’s confidence that they are loved.

“The diocese is a stunning model to the Church and the world. In a sparse landscape we find the exact opposite in our communities,” Bell said.

The bishopric of Eastern Oregon is a half-time position; Bell said he will be in the diocese two weeks a month and maintain his residence in Coeur d’Alene, Idaho, where he is presently the rector of St. Luke’s Episcopal Church.

The diocesan office moved to the campus of Ascension School in Cove from The Dalles in October 2013. Bell said he will keep the offices in Cove.

“I really want to have more opportunities bringing the clergy together and Ascension has the space and the housing to do that,” Bell said.

Bell said another advantage of keeping the headquarters at Ascension is that the camp and conference center has the technology that facilitates phone and video conferencing – a valuable asset for a diocese that covers three-quarters of the state.

Besides the convenience of Ascension’s facilities, Bell said the campus is representative of the Diocese of Eastern Oregon.

“If there is a place that becomes the center of the diocese, Ascension School is that. Bishop Kimsey thought we shouldn’t have a cathedral; it draws away from who we are. With the chapel as our “cathedral” it brings us back to our very rich western tradition,” Bell said.

Bell will be consecrated April 16, pending the required consents from a majority of bishops with jurisdiction and standing committees of The Episcopal Church. McClain said the site has not yet been determined.