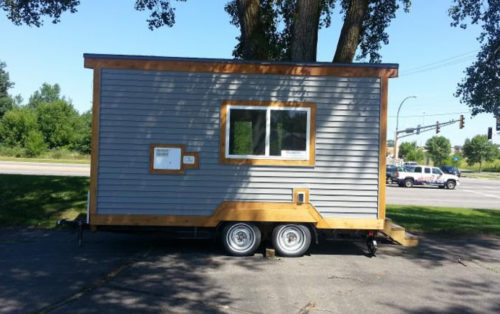 The Tiny House that will soon be home to a homeless person through the winter and beyond. Photo: Episcopal Church in Minnesota

[The Episcopal Church in Minnesota — St. Cloud, Minnesota] A little more than a year ago, the Episcopal Church in Minnesota Trustees, in consultation with its Joint Finance and Audit Committee, forgave more than $1 million in outstanding loans to faith communities, in hopes of resetting the relationship to one where the trustees could be a resource to the diocese’s faith communities, rather than collecting debts from them.

“When we reviewed the level of interest payment to income, we came to the conclusion that many of these loans were functional grants,” said Rich Simons, former trustees vice chair. “Further, we really wanted to stimulate saving for deferred maintenance for many more properties across ECMN. Leveraging the remaining funds should have much more effective outcomes for a great number of faith communities.”

St. John’s Episcopal Church in St. Cloud was one of those faith communities that had an outstanding loan forgiven, and over the last year they have begun to embrace a new model for ministry, in addition to taking risks for the sake of the gospel. The faith community’s new model for ministry involves utilizing a cadre of supply clergy and relying on the leadership of the laity to move the church forward. In addition, they’ve partnered with a local organization to build and service a “Tiny House” on their property, in which a homeless person will live through the winter and beyond.

“It is truly inspiring to see how the faith community of St. John’s moved from living with a sense of scarcity to sharing their true abundance with their neighbors,” said Minnesota Bishop Brian N. Prior.

The trustees are elected to ensure the missional sustainability of all faith communities, and the unanimous vote to forgive the remaining balances of all loans to ECMN faith communities came after nearly two years of discernment about the role the trustees played within ECMN. This led to their ultimate decision to divest themselves of the loan program, converting the remaining loan funds to a matching grant program for property maintenance. Most importantly, however, the hope in making this decision was to stoke the fire for mission by relieving the burden of debt in faith communities in the tradition of the biblical jubilee.

David Olson, vice chair of the trustees, is thrilled to see the success and energy at St. John’s. “Our mission as trustees is to enable and empower our faith communities to achieve their missional goals,” said Olson. 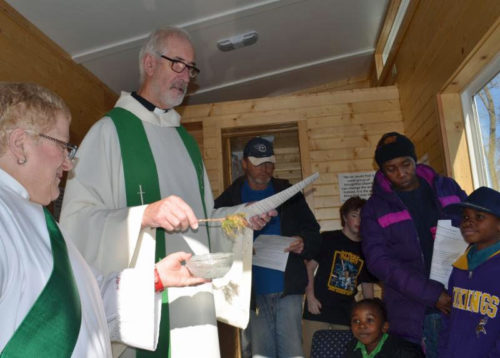 The Rev. Fred Nairn and The Rev. Priscilla Gray lead a blessing of the Tiny House. Photo: Episcopal Church in Minnesota

St. John’s Senior Warden David Wall says he is convinced that there would be no way the faith community would have had the energy and enthusiasm to undertake these new ministries if they were still dealing with the “financial monkey” that had been on their backs for so many years. “Getting that off our backs has been incredibly liberating,” said Wall.

Nancy Dyson-Powers, a vestry member at St. John’s, said that because of this new financial freedom, St. John’s has been able to explore different ways of being the church to each other and to their neighbors.

A community garden has been established on the faith community’s property with two other churches, the Coalition for Homeless Men, and the African Women’s Alliance. The focus of the garden is growing relationships while growing food. On Sunday afternoons, St. John’s is open to those experiencing homelessness as another way to build bridges through a shared meal, games, and laughter. These new ministries have taken St. John’s out of their comfort zone and into a place where communication, compromise, honesty, and healthy discussion is becoming the norm.

Powers added, “Doing church is pretty easy. Being the church is messy, scary, and beautiful.”