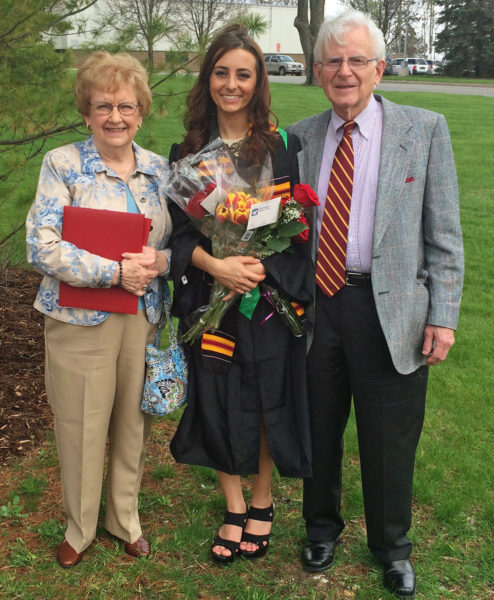 Former Kosovo refugee Hazbije Dullovi says “it’s so difficult to put into words” what Bill and Genny Davenport mean to her and her family. The Davenports, members of St. Michael’s Episcopal Church in Grosse Pointe Woods, Michigan, “adopted” her family after the Albanian refugees fled war-torn Kosovo when she was 7 years old. Last year, Hazbije, now 23, graduated from Ferris State University.

[Episcopal News Service] Congress may be working on an appropriations bill that could stall or halt the arrival of some refugees, but Bill Davenport can’t wait to welcome them to southeastern Michigan – again.

About 16 years ago Davenport and others at St. Michael’s Episcopal Church in Grosse Pointe Woods, a Detroit suburb, in conjunction with the Domestic and Foreign Missionary Society’s Episcopal Migration Ministries helped collect furniture, linens and other household items to furnish an apartment for an Albanian family of six fleeing war-torn Kosovo.

Davenport also helped out with job counseling, transportation for doctor and dental visits, and enrolling the children in school.

They’ve kept in touch through the years and “Bill is like my grandfather, who I left behind in Kosovo, along with other family members,” said Hazbije Dullovi, now 23.

“This is a lifelong relationship. I talk to him on the phone every other week; our families get together around Christmas time.”

She was about 7 years old when they fled fighting between ethnic Serbs and ethnic Albanians. “I remember the fear of war and hiding in basements,” she told the Episcopal News Service. “We also camped out somewhere in the forest. We escaped once the war was getting closer. We were getting bombed.”

Hazbije, her parents, siblings and extended family of aunts, uncles and cousins, walked to Macedonia, a distance of about 100 miles “because we heard they were taking in Albanians.”

Three months later, the family returned to find their home reduced to rubble. They left for the United States.

“Everything was gone; it was burned to the ground,” she said.

Last year, she graduated from Ferris State University and works as a finance assistant at a health care center in Grand Rapids. She feels grateful for “the way everyone accepted us. There were so many struggles, if it wasn’t for the people reaching out to help us, I don’t know where we’d be today.”

The congregation is busy with preparations while they wait to welcome refugees:

A Thanksgiving Eve service included an ingathering of bathroom and kitchen items and a focus on “the understanding that we are called to care for the least of our brothers and sisters, regardless of their faith tradition.”

This Sunday, Dec. 13, they will participate in the “We Welcome Refugees” national campaign to raise awareness and to provide aid and support for refugees in the Middle East, Gronek said. “The members of the church community want to be a blessing. We’re just helping them find a way to do that in a real concrete way,” she said.

The Episcopal Public Policy Network also has issued an action alert, calling upon people of faith to contact Congress and urge support for resettling refugees.

Fear and misunderstanding stalls welcome efforts
EMM has been helping support and resettle refugees for about 75 years, through partnerships with local affiliates in 26 dioceses and 22 states. In Michigan, the agnecy partners with Lutheran Social Services, whose efforts have been hampered by fear and misunderstanding in the wake of conflict and terror attacks, according to Resettlement Program Manager Mihaela Mitrofan.

At least 1,264 refugees resettled in 2014 meant that “last year was a small year for us,” said Mitrofan. The agency also partners with Lutheran Immigration and Refugee Services and various congregations throughout the metropolitan Detroit area.

“There were a lot of changes in the refugee screening process. And … due to the conflict in the Middle East a lot of processing centers were closed or on pause, so that caused a very slow arrival here for us.”

Michigan Gov. Rick Snyder, along with about 30 U.S. governors, had challenged the resettlement of Syrian refugees in the wake of recent terrorist attacks in Paris and elsewhere. But Mitrofan said Metro Detroit’s Syrian-American community is very strong and her agency has been working to enlist faith groups to aid in resettlement.

Snyder has since softened his stance and “we are very optimistic in working together on a plan of bringing in possibly a couple thousand refugees,” she said.

But the American Security Against Foreign Enemies Act of 2015 (HR 4038), sponsored by Texas Republican Michael McCaul, passed 289-137 in the U.S. House of Representatives in November and was sent to the Senate for consideration. President Obama has said he will veto the measure if approved by the Senate.

Such actions make advocacy and congregational partnerships all the more important, said Mitrofan, who has made contacts with more than 20 churches in the last few months, she said.

“What’s encouraging is to see that even after the Paris attack and all the rhetoric going around, congregations are reaching out to us. They understand who refugees are” and that such relationships are not one-sided, but benefit everyone involved.

The Rev. Terri Pilarski, rector of Christ Church in Dearborn, Michigan, is a facilitator for refugee resettlement in the Episcopal Diocese of Michigan. She said she’s heard from at least a dozen congregations interested in varying ways to help welcome refugees from Syria, Iraq and elsewhere. “The ministries might range from meeting a group at the airport, or setting up an apartment or house, or providing needed items,” she said.

Congregations can serve as an intermediary for refugees between “the tragedy of where they’ve been and the community they are arriving in,” added Pilarski, who also has helped to resettle refugees in the Episcopal Diocese of Chicago.

While serving at the former St. Hilary’s Church near Chicago, the congregation hosted a Rwandan family in the church for several days, providing them with beds, linens, showers, food and “it was an amazing experience” for everyone, she said.

The family – a grandmother, mother and several children – had left Rwanda, had gone to a refugee camp in Cameroon, then to Sudan, where they caught a plane to Paris and then to Chicago.

Their trauma was evident when they arrived, she recalled. “Over the course of time, the family came back to life, they went from being incapable of having a conversation to laughing and smiling.”

She said benefits cut both ways: “For the congregation, it was an incredible experience to open up our door, to have this family come in, in such great need. We didn’t anticipate them being happy or grateful because they had been through so much.”

Dearborn, a city where the proportion of Arab Americans is the largest in the United States, is one that understands the importance of welcoming the stranger, assisting refugees in finding jobs, learning the language and attending school, she said.
She anticipates partnering with St. Paul’s Lutheran Church in Dearborn, although “we are in a holding pattern” currently. She believes arrival of Syrian refugees won’t happen before 2016 and that present fears and misunderstandings even exceed those in the post-9/11 climate. “As churches we’re going to have our work cut out for us to model what it means to be open and welcoming,” Pilarski said.

The Rev. Judith Schellhammer’s “Nuts and Bolts” blog attempts to challenge some of those misconceptions and educate readers about the rigorous steps employed in vetting refugees before they are approved to enter the country.

Schellhammer, a retired college physics teacher and current Hillsdale College dormitory residence director who was recently ordained a deacon, serves at St. Michael and All Angels Church in Cambridge Junction. She hopes to engage her 49 dorm daughters in preparing refugee welcome kits.

She also hopes the blog will inspire positive action. After reading Schellhammer’s blog, a former mentor contacted her. “She had only been hearing negative voices from Christians and … she was so thankful to read a true Christian perspective of welcome, compassion and love,” she said.

“It seems to me that what’s so important is recognizing that these are not ‘the other,’ ” Schellhammer said. “They are us and as soon as we get rid of ‘the other,’ it’s so much easier to embrace ‘the us’ of the stranger, of the people we don’t know,” she said.

“I look at the faces in the photos and I imagine myself there and I would long for people to be welcoming and to have the compassion that’s needed. If that’s what the blog can do, if that’s what I can do, that’s a good thing.”
‘Just love your neighbor and run with it’

LSSM’s Mihaela Mitrofan said the agency has also partnered with the Greenfield Presbyterian Church in Berkley, another suburban Detroit community, to share the $700 monthly rent for a two-bedroom apartment and other expenses for newly-arrived families.

Church board member Bob Buckley said the congregation so far has assisted a single man from Burma, an Iraqi Christian family and three Syrian families in the early stages of the relocation process.

After going through a process of discernment with LSSM caseworkers, the church’s outreach committee decided “this was a ministry we wanted to get involved with,” he said.

The average length of stay in the apartment is anywhere from three weeks to two months, depending on how quickly the family was able to secure a more permanent residence, he said.

Buckley, an industrial sales representative, believes that any person of faith “should be willing to help people in need … helping people relocate so they can live a peaceful life, whether they happen to be Muslim, Christian, whatever.”

Often, people feel overwhelmed by what seems the enormity of helping – that there isn’t much they can do to help – but Buckley said that just isn’t true.

Former Kosovo refugee Hazbije Dullovi says that kind of love changed her life. St. Michael’s resettlement volunteer Bill Davenport “is family,” she said. “It’s so difficult to put into words what he means to us,” she said. “I don’t think I’d be where I am today, without Bill.

“It makes me want to help out and reach out too,” she said. “Knowing where I came from and what my parents gave up, they left our entire family and everything they knew, to bring us here for a better life, that motivates me every day.”

Davenport says he learned a lot from getting to know Hazbije and her family, especially about the struggles of refugees “and all the things they have to go through.”

Davenport said he feels a sense of urgency about the pause in resettling Syrian refugees. “They are the ones who’ve suffered from terrorism,” he said. “A lot of them have been waiting for years to come here.”

Meanwhile “we’re waiting to see what’s happening. This is what we do – we welcome the stranger – and what better way can we do it?”