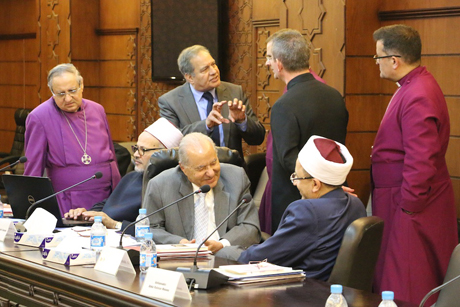 Anglican and Muslim leaders chat informally during inter-faith dialogue at the renowned Al-Azhar Al-Sherif Islamic center in Cairo
Photo: Diocese of Egypt with North Africa and the Horn of Africa

[Anglican Communion News Service] Terrorism, in many of its forms, is the outcome of the misuse of religious texts, often taken out of context; and is an aggressive ideology that must be combatted with sound teaching – those were some of the agreed outcomes of the 12th annual Christian-Muslim dialogue between the Anglican Communion and the Al-Azhar Al-Sherif.

The full communiqué is here.

The talks began in September 2001 when an interfaith dialogue committee between Al Azhar al-Sherif – the renowned Islamic center in Cairo – and the Anglican Communion was established in an agreement signed by the Grand Imam of Al Azhar, the Archbishop of Canterbury and the Bishop of the Diocese of Egypt.

The annual meetings are designed to further co-operation and understanding between Christianity and Islam.

At their meeting in Cairo this week, the participants – who included Egypt Archbishop Mouneer Anis; Church of England Bishops of Bradford and Southampton, Toby Howarth and Jonathon Frost; and the Archbishop of Canterbury’s Secretary for inter-religious affairs, the Rev. Mark Poulson – denounced the recent terrorist attacks in Beirut, Paris, and Mali; and affirmed the importance of “joining the efforts of the international community in its determination to combat terrorism and in depleting the financial and military resources of terrorists.”

They said: “It is important to work together in combating terrorism to prevent its spread,” and emphasized the importance of combating “the social marginalization of ethnic and religious minorities throughout the world, and discrimination on the basis of ethnicity or religion. “

In their communiqué, the Christian and Muslim leaders commended “the conference organized by Al-Azhar Al-Sherif to respond to extreme ideologies and false and mistaken fatwas and [affirmed] the role of Al-Azhar Al-Sherif in propagating tolerant and moderate teachings of Islam.”

They also “appreciated the role played by the Anglican Communion in combating Islamophobia in the United Kingdom and throughout the world.”

The conversations focused on “how religious leaders can combat violence done in the name of religion and extremist ideologies” and was assisted by three presentations.

“The morning session of the dialogue consisted of the presentation of two papers by the representatives of Al-Azhar: Using Religious Texts in Justifying Violence: An Analysis and Critique and Citizenship Rights and Responsibilities,” the Diocese of Egypt said on its website.

“The first paper focused on a selection of verses from the Qur’an which are often used to support violent and extreme ideologies; the paper showed how these verses have been misinterpreted and taken out of the context of the whole.

“The second paper carefully analyzed the concept of citizenship and how the Qur’an affirms the oneness of the human race and denounces discrimination in its many forms.

“Whilst Muslims and Christians recognize that conflict is part of the human condition, we also recognize that our understanding of scripture compels us to work to bring an end to that conflict and to strive for reconciliation and restoration,” the leaders said in their communiqué. “We discussed the responsibility of all Christians and Muslims to respect the right of others to practice their faith freely. Both Muslims and Christians believe that God created human beings to live at peace with each other.

“In our discussion we examined situations in our world where these understandings are not currently shared. We expressed our sadness about the difficult situation which faces the followers of our two religions in many countries of the world.”

After the meeting, the dialogue committee took part in the Together for Egypt event at which 200 imams and priests received recognition for their reconciliation work in an initiative organised by Beit el-Aila – the Egyptian House of the Family – and sponsored by the Episcopal/Anglican Church in Egypt.

The committee will meet again in the United Kingdom in the autumn of next year.