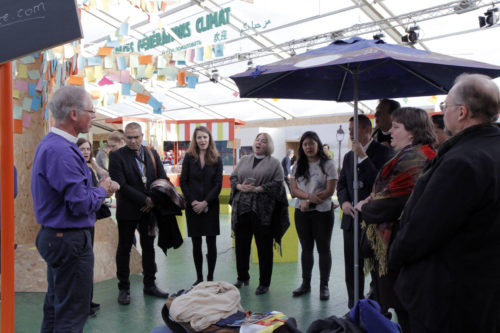 California Bishop Marc Andrus leads Episcopalians and others in a pop-up worship service in the green zone at COP21. Photo: Lynette Wilson/ENS

[Episcopal News Service – Le Bourget, France] As the Conference of Parties, or COP21 as it’s known, entered its second week, the delegation representing Presiding Bishop Michael B. Curry and the Domestic and Foreign Missionary Society here on the outskirts of Paris on Dec. 7 sent a letter of thanks and encouragement to the ambassadors of the United Nations permanent missions of the countries in which The Episcopal Church has a presence.

After the first five days of the Nov. 30-Dec. 11 conference, negotiators representing the 195 signatory countries of the Conference of Parties in attendance submitted a 48-page draft outlining what could become a binding agreement whereby states would limit greenhouse gas emissions in an effort to keep global warming at or below 2 degrees Celsius.

“The letter is an important piece of the church’s advocacy, as it serves as an official record of our positions at this COP and includes the reflections of our delegates at the end of the first week. We will continually refer to this written record of our engagement and our positions as we continue to build relationships with member states and civil society well beyond this COP. Building partnerships over the long term is important,” said Lynnaia Main, global relations officer for the Domestic and Foreign Missionary Society and its liaison to the United Nations.

“Contacting the negotiators who are working on behalf of their countries, through their UN permanent missions, is key to influencing the outcome at the beginning of the COP. In a previous letter, we let them know our official positions, how and where we would be present at COP21 and invited them to our worship,” she said. “As members of civil society, we don’t have a vote and a voice around the table ourselves, so we contact the permanent missions to tell them what we think and ask them to consider our positions as well. In between meetings, we get to know them and their positions, which helps to find areas of mutual interest on which we might work together.”

Member states attempted a similar agreement to limit greenhouse gases during the climate talks held in Copenhagen in 2009, but failed to adopt a treaty. Should member states come to an agreement here, advocacy work continues as individual countries then need to ratify and implement the agreed-upon terms, Main added.

In addition to thanking the ambassadors for their countries’ work thus far, the letter reiterated The Episcopal Church’s climate change and environmental platform. 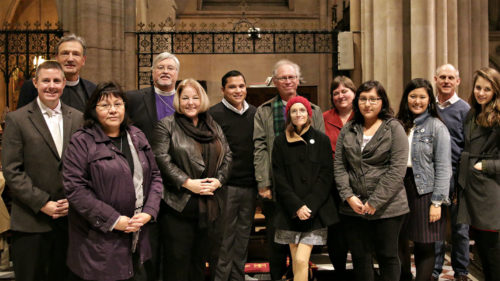 Episcopalians worshipped at the Cathedral of the Holy Trinity in Paris on Dec. 6. Photo: Jere Skipper

Main is part of an eight-member delegation officially representing the presiding bishop and the Domestic and Foreign Missionary Society at the 21st annual Conference of Parties, the 2015 United Nations Climate Change Conference. The Domestic and Foreign Missionary Society is the name under which The Episcopal Church is incorporated, conducts business, and carries out mission, including at the United Nations.

More than 40,000 people, including heads of state, delegates, business leaders, activists and representatives of non-governmental and civil society organizations are attending COP21, where – in addition to the official talks – panels, presentations and workshops are happening simultaneously in the Climate Generations Area, or the “green zone,” which is open to anyone. 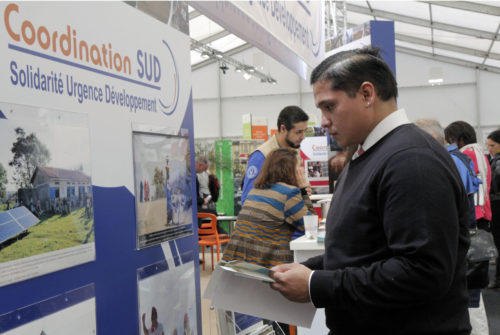 The Rev. Brandon Mauai of the Diocese of North Dakota explores the exhibit space in the green zone at COP21. Photo: Lynette Wilson/ENS

From panels on solar energy, to exploring the private sector’s responsibility in adaptation and resilience projects, to integrative approaches to food security and sustainable cities, films, protests, exhibits and a daily pop-up worship hosted by The Episcopal Church, the green zone offers civil society attendees an opportunity to listen, learn and network.

In the “blue zone,” government ministers and officials are working to resolve disagreements over financing, the roles developed and developing countries will play in tackling climate change, evaluating and strengthening country pledges aimed at limiting greenhouse gas emissions and what actions can be taken over the next five years.

International scientific consensus has long maintained that global warming beyond 2 degrees Celsius over pre-industrial levels would have serious consequences on the earth’s climate patterns, including an increase in extreme weather events. The draft text, appearing to respond to pressure from people living in the world’s most vulnerable areas, seeks to limit warming to between 1.5 and 2 degrees Celsius.

Before arriving in France for the negotiations, the United States, Europe and China, the world’s biggest greenhouse gas emitters, committed to reducing emissions, the U.S. by 26-28 percent below 2005 levels by 2025. Still, scientists argue those targets won’t be enough.

In its letter of thanks, the delegation specifically asked that the final agreement uphold the rights of indigenous peoples; and that negotiators strive to reduce carbon emissions by 80 percent by 2050, the church’s stated policy goal.

The Episcopal Church’s policy statement on an 80 percent reduction “squares up well with the most advanced thinking here at COP21,” said California Bishop Marc Andrus, who is part of the presiding bishop’s delegation.

Vulnerable populations, like residents of the Marshall Islands who are at risk of losing their home and their culture, have said the 2 degree Celsius threshold “is completely unacceptable,” he said.

“The Episcopal Church policy would keep us below 2 degrees,” said Andrus, adding that the church’s policy is based on 20 years of grassroots and General Convention legislative action.

“Everything we do gets a lot of buy-in,” said Andrus. “The policy statements that we are presenting to people here at COP21 are the result of decades of thousands of people weighing in with their passions and their expertise and we’re expressing it here.” 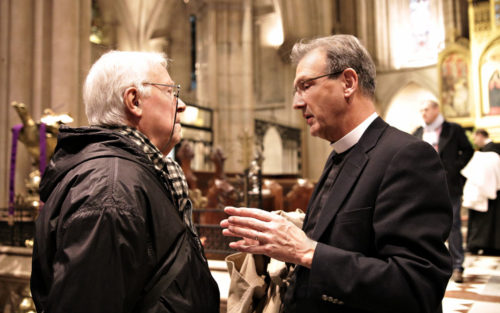 The Very Rev. Mark Richardson, president and dean of Church Divinity School of the Pacific, right, speaks to a parishioner following a Dec. 6 Eucharist at the Cathedral of the Holy Trinity in Paris. Photo: Jere Skipper

The Episcopal Church is present in 17 countries and also a member of the wider Anglican Communion which exists in 164 countries. As such, The Episcopal Church offers a unique perspective, said Main, adding that its presence at COP21 is an important opportunity to build relationships and find areas of mutual concern.

“Member states appreciate that the churches are present at the grassroots in a very authentic way, we are where people gather, where people share their lives with each other,” said Main. “We are not a project, we are not coming in to provide assistance and just leave, we are part of the social fabric of communities, and we have things to say on behalf of those communities … In the U.N. context they understand how important that is that we do bring that authentic voice and understanding.”

This year  marks the first time Episcopalians officially have joined other religious denominations and faith-based organizations – including Presbyterians, Baptists, Methodists, the Religious Society of Friends and others – at the annual conference on climate change.

The presiding bishop’s delegation arrived in Paris Dec. 5, and the following day attended “Faith and Climate Change: Building a Communications Bridge,” the last in a series of Sunday morning forums at the Cathedral of the Holy Trinity in Paris to raise awareness about climate change and its effects. The Rev. Fletcher Harper, executive director of GreenFaith and a priest in the Diocese of Newark, moderated the forum and later preached during the Eucharist.

Harper, the Rev. Sally Bingham, president and founder of Interfaith Power & Light, who will give a presentation later this week to officials in the blue zone, join the delegation and other voices of faith present at COP21.

“We’re here to demonstrate that climate change is an issue that is a profoundly moral one, that it affects millions and millions and millions of people around the world, that it degrades God’s creation, which is an incredible gift that we are all called to take care of, and so we are here to lift up those concerns,” said Harper in an interview with Episcopal News Service following the service at the cathedral.

The faith community, he said, is attending the conference in particular to stand with the people who are most vulnerable to the effects of climate change. During his sermon, he pointed out that in addition to Christian statements on the environment, including Pope Francis’s Environmental Encyclical, there are strong Islamic, Hindu, Jewish and Buddhist statements on the environment.

— Lynette Wilson is a reporter and editor with Episcopal News Service.