[Anglican Communion News Service] If you wish to see something launched with style, fervor and commitment then you could do no better than have been in Lusaka Cathedral yesterday (29 November) when the Province of Central Africa launched the preparations for the 16th meeting of the Anglican Consultative Council (ACC-16), which will take place in Lusaka next April.

The Advent Sunday service at the Cathedral of the Holy Cross provided an ideal context for the launch. It was packed to over-flowing with people from all the congregations in Lusaka and some from as far as field as Lake Malawi Diocese. There was music of all kinds – choirs, music groups, brass bands – and guests from the diplomatic community in Lusaka as well as all the 15 bishops of the Province.

In welcoming the congregation Archbishop Albert Chama described it as “a great day for the Province” stressing that they had the privilege next year of “welcoming the entire Anglican Church to Zambia”. 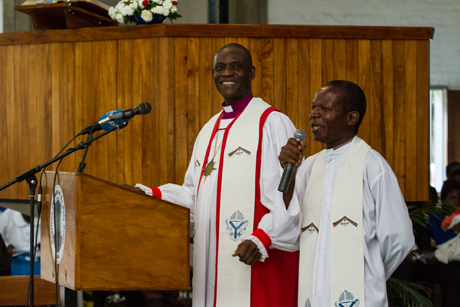 The general secretary of the Anglican Communion, Archbishop Josiah Idowu-Fearon, preaches at the Cathedral of the Holy Cross in Lusaka during the launch service for next year’s ACC-16 meeting. Photo: Michael Ade/Anglican Communion Office

In his sermon Archbishop Josiah Idowu-Fearon, secretary general of the Anglican Communion, thanked the congregation for “accepting the challenge to help with the preparations for the 16th Council of the ACC”. He went on to tell them that “come April 2016 we shall all be here!” As he experienced the exuberant joy expressed in the service he said that he would tell all those coming to the ACC “to come with their dancing shoes” to great whoops of delight from the congregation.

During the service a group of nine children offered a poem, written specifically for the occasion, on love. It was delivered with dramatic energy and two lines seemed to capture the atmosphere of the service, “love is never love until it is given away” and ended with the message to us all, “let love lead the Anglican Communion!”

The launch itself came towards the end of the service. In a video message the Archbishop of Canterbury Justin Welby told the congregation that he was looking forward to being with them as the ACC was again hosted in Africa. He emphasised that he was wanting to hear the voice of the youth who are meeting prior to the ACC. 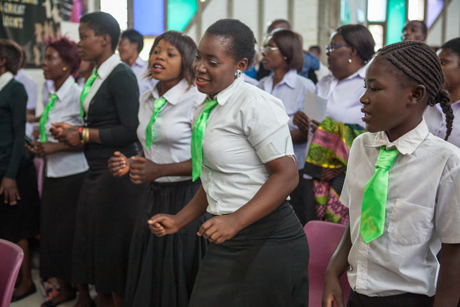 Young people dance during the launch service in the Cathedral of the Holy Cross in Lusaka for next year’s ACC-16 meeting. Photo: Michael Ade/Anglican Communion Office

A message was read from Bishop James Tengatenga, the Chair of the ACC, expressing his excitement about the ACC coming to Lusaka, a province he has formerly served in. He went on to ask that those involved might be “energized for all the preparation (being made) for us for April next year.”

The launch was completed by the cutting of a large cake before a large number of purple and white balloons were released and floated slowly to the high ceiling of the Cathedral.

The thoughts behind this launch service were summed up in the special prayer written for the day:

Release your direction for your church,
That in launching this Consultative Council,
All things shall work to God’s praise and glory.

To that the congregation at the Cathedral said “Amen!”