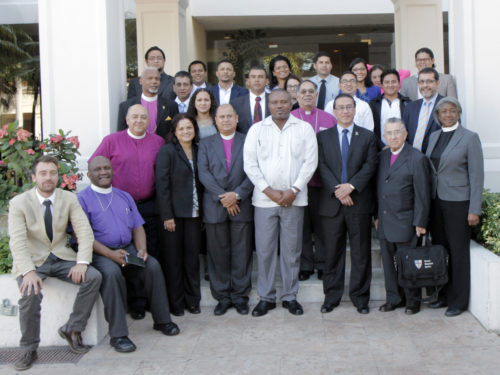 [Episcopal News Service – San Salvador, El Salvador] As Syrian refugees continue to risk death embarking on a dangerous journey to Europe in search of a better life, Central Americans forcibly displaced by an ongoing social conflict in the Northern Triangle also are fleeing, traveling both north and south in search of safety.

The region’s ongoing forced migration and internal displacement were two topics discussed during a Nov. 23-24 conference in San Salvador on forced migration, human trafficking and new forms of slavery in Central America. Representatives and ombudsmen from the region’s human rights ombudsmen offices, nongovernment and civil society organizations, and Anglican and Episcopal bishops attended the conference. During the conference the bishops also took the first step in creating a regional Anglican commission on human rights. 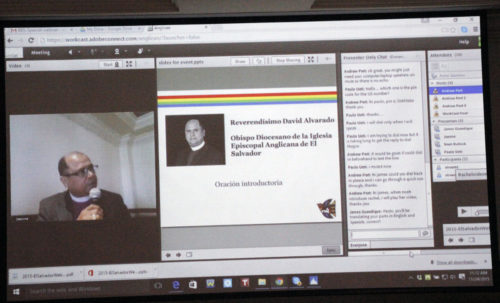 The Anglican Alliance and the American Friends Service Committee sponsored the two-day conference held at the InterContinental Hotel and organized by Foundation Cristosal, an organization rooted in the Anglican and Episcopal churches committed to defending and advocating for human rights.

“The conference was something that Cristosal proposed because of the work we are doing on forced displacement,” said Executive Director Noah Bullock, adding that forced displacement isn’t a problem confined to the Northern Triangle countries of Guatemala, Honduras and El Salvador.

Foundation Cristosal has worked to establish legal precedents for the protection of victims displaced by violence in El Salvador, provides shelter and protection for victims and is working to build regional resettlement capacity.

In addition to those seeking asylum in the United States, in the last two years asylum claims initiated mainly by Salvadorans and Hondurans in Nicaragua, Costa Rica and Panama have increased by 1,200 percent.

“And the trend will likely continue to increase,” he said, adding that bringing bishops together with human rights advocates presented an opportunity to share expertise and create alliances aimed at influencing public policy and responding to emergency humanitarian needs.

“The region is not prepared to receive an influx of refugees. Leadership  needs to be assumed on the issue and Cristosal has been positioned well to work with the council of ombudsmen and some of the other networks in the region to open the door for the church to fill that leadership void.”

As Anglicans and Episcopalians, “we are obligated to fight for justice and peace in all communities and respect the dignity of every human being,” said Honduras Bishop Lloyd Allen, who during the meeting already had initiated a conversation to begin to address the issue with his diocese back home. “We cannot close our eyes to the abuse.”

The Episcopal and Anglican churches are present in the three Northern Triangle countries: The Diocese of Honduras belongs to Province IX of The Episcopal Church, and the dioceses of Guatemala and El Salvador belong to the Anglican Church of the Central Region of America, known by its Spanish acronym, IARCA.

The crisis in Central America briefly held the world’s attention in the summer of 2014, when record numbers of unaccompanied minors and women traveling with children surrendered to authorities at U.S.-Mexico border. Episcopal churches responded to the immediate crisis, and more recently General Convention passed a resolution in support of the rights of refugees and acknowledging the continued violence against and displacement of citizens in Central America.

Vulnerable communities across the region suffer casualties due to violence at a level on par with conflicts raging in other parts of the world, according to studies. In the first seven months of this year, more than 4,000 Salvadorans were murdered, and on one single day in August, 52 people were killed. In Honduras, the number in the first six months was estimated at 2,720 and in Guatemala, the largest of the Northern Triangle countries, 4,261 people had been assassinated between January and September.

“El Salvador and Honduras compete with Syria in terms of death rates,” said Bullock, who stressed the lack of durable solutions. “There really are no options for (these) people who flee one of the most violent, deadly conflicts in the world.”

In El Salvador alone, an estimated 289,000 people are internally displaced, whereas in Honduras, a conservative estimate puts the number at 170,000. In Guatemala, the number is closer to 250,000 people.

Of the three Northern Triangle countries, only Honduras has recognized the existence of forced displacement, establishing a national commission to study and document cases.

“Displacement as a form of violence cannot be ignored,” said Ricardo Lopez, who works in human rights ombudsman’s office in Honduras. “If people have received threats, (the threats) will be carried out … our streets are full of blood.”

In addition to bishops and ombudsmen, representatives of UNHCR, the International Organization for Migration and the International Committee of the Red Cross, which left El Salvador following the end of the civil war but returned in recent years, were present at the conference.

Last year marked the 30th anniversary of the Cartagena Declaration, which amended the 1951 refugee convention and the 1967 protocol definition of what it means to be a refugee: “persons who have fled their country because their lives, safety or freedom have been threatened by generalized violence, foreign aggression, internal conflicts, massive violation of human rights or other circumstances which have seriously disturbed public order.”

The countries of Central America and Mexico adopted the protocol, which was not recognized by the United States, at a time when both Guatemala and El Salvador were fighting civil wars and when Contra rebels were fighting the Sandinista government in Nicaragua.

In December 2014, Latin American adopted the Brazil Declaration to address the region’s new displacement trends. The declaration aims to end statelessness by 2024, building upon previous actions to strengthen international protection of refugees in Latin America.

“The problems aren’t just the problem of one country; they are shared regionally,” said Guatemala Bishop Armando Guerra. “It needs the attention of all of us.”

In some ways, the high levels of societal violence in the Northern Triangle are a legacy of the civil wars of the 20th century. More than 200,000 civilians were killed during Guatemala’s 36-year civil war and 75,000 people were killed in El Salvador’s 12-year conflict between the military-led government and left-wing guerilla groups. Although Honduras didn’t have its own civil war, it felt the ramifications of regional conflicts, and was a base for the U.S.-backed Contras fighting in Nicaragua from 1979 to 1990. 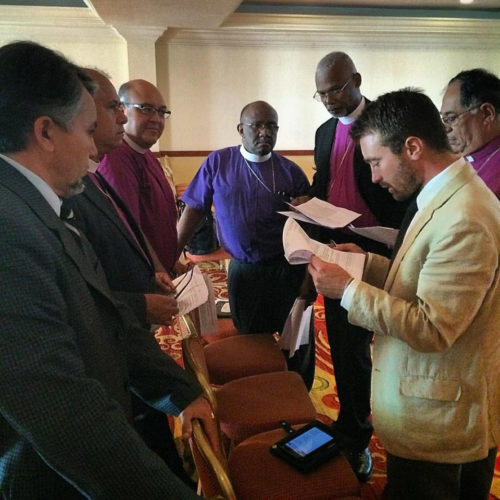 The problem of forced migration in the Northern Triangle is a result of violence, said El Salvador Bishop David Alvarado, adding that the violence itself is part of the larger, structural problems including poverty, limited economic opportunities, access to education, healthcare and other social problems.

“We are still recovering from the civil war and today we have problems with youth and gangs,” he said.

In the 20-year period following signing of the peace accords, 100,000 Salvadorans have been killed, more than during the civil war, and today some 70,000 people are reported to be gang members. In Honduras, the number of gang members is estimated at 116,000 and in Guatemala, the largest of the three countries, an estimated 14,000 people belong to gangs and another 30,000 are counted as gang sympathizers.

The gangs control territory through violence, including murder and rape, and extortion. Young males, particularly, are coerced into joining gangs. Refusal to join can be interpreted as expressing loyalty to a rival gang, and the uninitiated become a target for murder. Women and young girls often are taken as “girlfriends” of gang members, and often suffer rape and other forms of sexual violence as they are shared among the gang members.

It’s in this context that people are fleeing; moreover, a UNHCR survey of women detained at the U.S.-Mexico border determined that of the tens of thousands of women seeking protection, a large percentage had significant protection claims under the Convention against Torture.

Before a person crosses an international border, however, they’ve likely suffered internal displacement, first to another family’s home.

“This is a phenomenon that primarily affects poor people so usually the move (is) from one poor household to another poor household that’s likely controlled by a different gang or the same gang,” said Bullock. “Their presence in the territory is detected within two or three days, and so then they are obligated to move again and again until the resources run out. When they make the decision to leave the country they hide, because they are going irregularly to the United States or somewhere else.”

“What the victims say constantly to us is that ‘in these conditions I cannot develop as a human being.’ When you are being persecuted and your life is controlled when your life is threatened, you don’t get to develop, you don’t have opportunities and you leave to find them.”

Bullock has begun framing a response to the refugee and internal displacement crisis as a “preferential option for the victim,” and ultimately the bishops concluded the church’s witness is to respond to the needs of people in their communities and to welcome the stranger.

In Costa Rica, for example, where 15-20 percent of the population is foreign-born, mainly Nicaraguans looking for economic opportunities, the church provides assistance to mothers and their children, 90 percent of them migrants, through two schools it operates in the capital, said Costa Rica Bishop Hector Monterroso.

It’s important not only that the church responds to human need, but that it also works to raise awareness around forced migration, said Panama Bishop Julio Murray. This is why a regional Anglican commission on human rights is being formulated, in connection with the countries’ human rights commissions.

“The strategic purpose is that if we are going to form an Anglican body, we should form it with good, strong connections with other human rights bodies – and in this case it was specifically the ombudsmen, which are autonomous state entities,” said Bullock.

“It’s a good fit because the ombudsmen can do the technical work around human rights, they can make public policy and do advocacy,” he said. “And the churches, they can make an appeal to people, to change the people, so that policy isn’t empty, that there’s actually a social change that is backing it and so it might be real, and that’s important.”