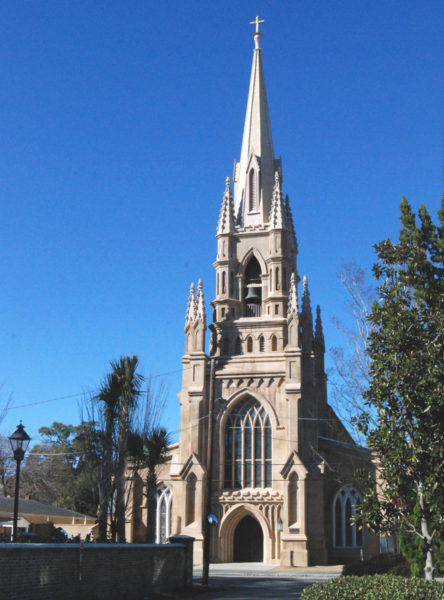 More than 300 delegates and visitors heard addresses from the Rt. Rev. Robert Gilliesthe bishop of Aberdeen and Orkney in the Scottish Episcopal Church,  and their own bishop, the Rt. Rev. Charles G. vonRosenberg. Both talks built on the convention theme, encouraging both lay and clergy to listen for God’s call to ministry. (Video and texts of both addresses can be found here.)

The gathering was the annual business meeting for the local diocese of The Episcopal Church and the Anglican Communion in eastern South Carolina.

The convention voted overwhelmingly to designate historic Grace Episcopal Church in downtown Charleston as the cathedral of the diocese, to be known as “Grace Church Cathedral.” The revised Canon 17 affirms a role that Grace has been serving since early 2013, when a breakaway group left The Episcopal Church along with the parish that formerly served as the cathedral.

Chancellor Thomas S. Tisdale Jr., who worked on the cathedral canon, said that naming a cathedral is a positive move for the unity of the diocese. Grace houses the offices of the Bishop and diocesan staff, and will continue to serve as host for a variety of diocesan events, including the 226th Convention in November 2016.

The convention also unanimously adopted two resolutions aimed at racial reconciliation. Resolution 1 calls for continued prayer for those affected by the deaths at Mother Emanuel AME in Charleston on June 17, and urges congregations in the diocese to follow Mother Emanuel’s example of love and forgiveness.

Resolution 2 calls for a renewed commitment to racial justice and reconciliation, and directs the Diocesan Council to develop plans for training, community dialogue, internal examination, and the development of partnerships with other churches and institutions, reporting regularly to the convention and diocesan leadership.

Worship services at the convention also included time for prayer and reflection following the news of the attacks in Paris. The meeting reconvened the next day with prayers for the victims and for peace.

As part of the diocesan commitment to outreach, the offering at the Nov. 13 Eucharist, totaling $3,478, was designated for two flood relief efforts for South Carolina: the Black River United Way Flood Relief Fund, and Episcopal Relief & Development.

Convention-goers also celebrated a milestone for St. Mark’s Episcopal Church in Port Royal. After significant growth in membership and resources, this mission church serving the Beaufort area applied for recognition as a parish of the diocese. The Convention approved the change by acclamation on Saturday, welcoming a parade of St. Mark’s members into the church with a standing ovation.

The convention also heard a report from Tisdale Jr. on the status of legal action resulting from the actions of a group that broke away from The Episcopal Church in 2012. A decision from the South Carolina Supreme Court on property issues is expected to come in the next several weeks, but Tisdale said that the future of the diocese is bright, no matter which way the decision goes. “Whatever fork the road takes, we will flourish in either direction,” he said.