[Anglican Communion News Service] Queen Elizabeth II has opened the 10th five-year-term of the Church of England’s General Synod with an address which spoke of major advances in Christian unity and the need for prayer for January’s Primates Meeting.

Earlier, during a sermon at a Eucharist in Westminster Abbey attended by the Queen and other members of the General Synod, the Preacher to the Papal Household, Father Raniero Cantalamessa, said that disagreements over moral issues should not divide churches. 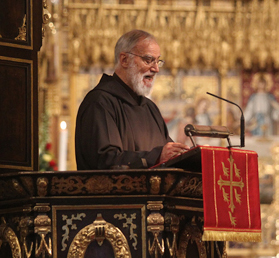 “The presence among us today of the Preacher to the Papal Household would not have been possible but for the notable advances since 1970 in co-operation across the great Christian traditions,” the Queen said in her speech to the Synod. “There are many other examples. The covenant between the Church of England and the Methodist Church; the recent visit of the Ecumenical Patriarch; the participation in this Synod of observers from so many Christian traditions; the newly created ecumenical community of St. Anselm at Lambeth. Each of these serves as a reminder both of the progress already made and of the journey that still lies ahead in the pursuit of Christian unity,” she said.

The Queen recognized the divisive nature of the some of the Synod’s business, saying that the “last Synod will be particularly remembered for the way in which, after prolonged reflection and conversation, even in the midst of deep disagreements, it was able to approve the legislation to enable women to be consecrated as bishops.

“This new Synod too will have to grapple with the difficult issues confronting our Church and our world. On some of these there will be many different views. And I am sure that members of the Synod will pray earnestly that the gathering in January of the Primates of the Anglican Communion will be a time when, together, they may know what is God’s will.”

Quoting St. Paul, the Queen said that all Christians “as ambassadors for Christ, are entrusted with the ministry of reconciliation. Spreading God’s word and the onerous but rewarding task of peace-making and conflict resolution are important parts of that ministry.

“So too is the Church of England’s particular vocation to work in partnership with those of other faiths and none, to serve the common good in this land. . .

“Your Graces, each new Synod inherits from its predecessor the same weighty responsibilities. Collectively, you must continue to draw deeply on your faith, judgement, and life experiences, as well as that precious Anglican tradition of unity in fellowship, to discern the future path of the Church of England.

“At the beginning of this new Synod, as you put your hand into the hand of God, my prayer is that, as we sang in that joyous hymn this morning, ‘His glorious light may shine ever on our sight, and clothe us round, the while our path illuming.’”

The Church of England’s General Synod is elected for a period of five years and meets two or three times a year. Archbishop of York John Sentamu said that this differed from other churches’ assemblies where the members are elected for each meeting and sometimes meet only once per year; or, in some cases, once every three years.

“There is time for us to grow together as a body of Christians, sharing fellowship and worship with each other and bearing each other’s burdens as we engage in the common task and, most importantly, sharing the joy of the Gospel of Christ.”

The Synod was gathering “at a moment of great uncertainty and conflict in our world,” Archbishop of Canterbury Justin Welby said. “We shall, in the midst of all our other business, want to take time to pray earnestly for the leaders of the nations as they grapple with problems so intractable that solutions are likely to be neither simple nor quick. 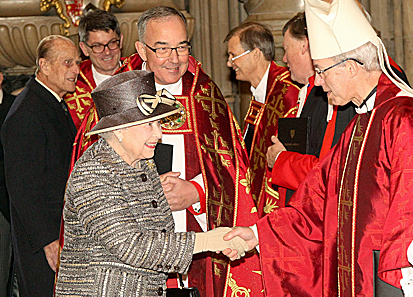 Archbishop of Canterbury Justin Welby greets Queen Elizabeth at the Eucharist for the inauguration of the 10th term of General Synod in the Church of England. Photo: Picture Partnership/Westminster Abbey

“As we seek to take counsel together here to discern the mind of Christ for the Church of England, and for those whom we serve in this land, we shall draw strength from knowing that Your Majesty’s prayers will be with us,” he said as he addressed the Queen.”

Earlier, the Archbishop of Canterbury presided over a pre-Synod Eucharist at Westminster Abbey attended by the Queen and civil and religious dignitaries. The sermon was given by Father Raniero Cantalamessa, the Preacher to the Papal Household.

He raised the forthcoming 500th anniversary of the Reformation – the great divide between the Western churches. “It is vital for the whole Church that this opportunity is not wasted by people remaining prisoners of the past, trying to establish each other’s rights and wrongs,” he said. “Rather, let us take a qualitative leap forward, like what happens when the sluice gates of a river or a canal enable ships to continue to navigate at a higher water level.

“The situation has dramatically changed since [Reformation times]. We need to start again with the person of Jesus, humbly helping our contemporaries to experience a personal encounter with Him. ‘All things were created through him and for him’; Christ is the light of the world, the one who gives meaning and hope to every human life – and the majority of people around us live and die as if He had never existed! How can we be unconcerned, and each remain ‘in the comfort of our own well panelled houses’?

“We should never allow a moral issue like that of sexuality divide us more than faith in Jesus unites us.

“We need to go back to the time of the Apostles: they faced a pre-Christian world, and we are facing a largely post-Christian world. When Paul wants to summarise the essence of the Christian message in one sentence, he does not say, ‘I proclaim this or that doctrine to you.’ He says, ‘We preach Christ crucified’ (1 Cor 1:23), and again ‘We preach . . . Jesus Christ as Lord’ (2 Cor 4:5).”

He continued: “This does not mean ignoring the great theological and spiritual enrichment that came from the Reformation or desiring to go back to the time before it. It means instead allowing all of Christianity to benefit from its achievements, once they are freed from certain distortions due to the heated atmosphere of the time and of later controversies.

“Justification by faith, for example, ought to be preached by the whole Church – and with more vigour than ever. Not in opposition to good works – the issue is already settled – but rather in opposition to the claim of people today that they can save themselves thanks to their science, technology or their man-made spirituality, without the need for a redeemer coming from outside humanity. Self-justification!

“I am convinced that if they were alive today this is the way Martin Luther and Thomas Cranmer would preach justification through faith!”

Addressing the issue of Christian unity, Father Cantalamessa said that it was “not a simple matter.”

“One has to start with the big Churches, those that are well structured, putting together that which unites them, which is vastly more important than what divides them,” he said. “Nothing is more important than to fulfil Christ’s heart desire for unity expressed in today’s gospel.

“In many parts of the world people are killed and churches burned not because they are Catholic, or Anglican, or Pentecostals, but because they are Christians. In their eyes we are already one! Let us be one also in our eyes and in the eyes of God.

“The Anglican Church has a special role in all of this. It has often defined itself as a ‘via media’ (a Middle Way) between Roman Catholicism and Reformed Christianity. From being a ‘via media’ in a static sense, it must now become more and more a via media in a dynamic sense, exercising an active function as a bridge between the Churches.

“The presence among you of a priest of the Catholic Church, in circumstances of such special significance, is a sign that something of the kind is already happening.”

Over the next two days, members of the Synod will debate the C of E’s program of reform and renewal, the refugee crisis, and the future of its church buildings.