[Anglican Communion News Service] The Church of England has launched an online campaign to encourage a renewal of prayer life in the nation; but the organizers could not have expected that the launch of its new website would have received quite as much publicity as it has – thanks to a decision by the UK’s three largest cinema chains to ban an advertisement featuring the Lord’s Prayer. 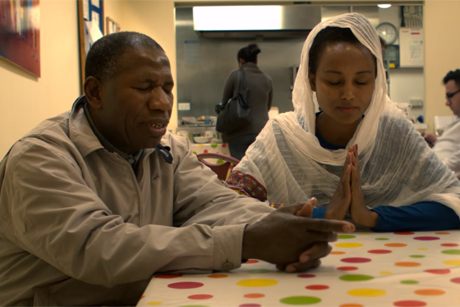 Refugees in a support center pray the Lord’s Prayer in a scene from the Just Pray cinema advertisement. Photo/Anglican Communion News Service

The advertisement, which features a range of characters reciting the Lord’s Prayer, including weight lifters, a police officer, a commuter, refugees in a support center, school children, a mourner at a graveside, a festival goer and the Archbishop of Canterbury, was prepared by the communications department of the C of E, working with the cinema’s advertising agency. It had been intended to show the advertisement ahead of screenings for the new Star Wars movie, The Force Awakens, which opens on 18 December.

The 60-second advertisement has been granted a U certificate by the British Board of Film Classification, meaning that it is suitable for all audiences; and has been cleared by the Cinema Advertising Authority. But the UK’s three largest cinema chains – Odeon, Cineworld and Vue – have refused to show the it, saying that it “carries the risk of upsetting, or offending, audiences.” This effectively bans the advert from 80 per cent of all cinema screens in the country.

“I find it extraordinary that cinemas rule that it is inappropriate for an advert on prayer to be shown in the week before Christmas when we celebrate the birth of Jesus Christ,”  Archbishop of Canterbury Justin Welby said. “Billions of people across the world pray this prayer on a daily basis. I think they would be astonished and deeply saddened by this decision, especially in the light of the terrorist attack in Paris where many people have found comfort and solace in prayer.

“This advert is about as ‘offensive’ as a carol service or church service on Christmas Day. As a church we are a Jesus movement and this is the prayer which Jesus taught his disciples.”

Welby urged people to watch the advert “and come to their own conclusions as to whether it is offensive or upsetting. Let the public judge for themselves rather than be censored or dictated to.”

The ban was described as “plain silly” by the Archbishops’ Council’s director of communications, the Rev. Arun Arora.

“The Lord’s Prayer is prayed by billions of people across the globe every day and in this country has been part of everyday life for centuries,” he said. “Prayer permeates every aspect of our culture from pop songs and requiems to daily assemblies and national commemorations.

“For millions of people in the United Kingdom, prayer is a constant part of their lives whether as part thanksgiving and praise, or as a companion through their darkest hours.

”In one way the decision of the cinemas is just plain silly but the fact that they have insisted upon it makes it rather chilling in terms of limiting free speech. There is still time for the cinemas to change their mind and we would certainly welcome that.”

In 1999, the British Christian singer Cliff Richard released the Millennium Prayer, a single featuring the words of the Lord’s Prayer set to the music from Auld Lang Syne. It was released by the independent record label Papillon after his own record company, EMI, said that they wouldn’t release it; and many radio stations refused to play it.

But it was an unlikely hit with the public – reaching number one in the official charts for three weeks running; staying in the Top 10 for seven weeks and the Top 75 for 16 weeks. In 2000, it received an Ivor Novello Award from the British Academy of Songwriters, Composers and Authors, in recognition of it being the biggest selling UK single of 1999.

The justpray.uk website, which has been produced by the C of E with the support of the Allchurches Trust – owners of Ecclesiastical Insurance, the company which insures most C of E churches – has been designed to “promote the renewal of prayer in a digital age.”

It creates a place for prayer with advice on what prayer is and how to pray. The site also provides a ‘live prayer feed’ of prayers being prayed across the globe through social media platforms.

In addition to the banned cinema advert, the C of E has produced a range of postcards and postcards to promote the new website.