[Anglican Communion News Service] Archbishop of Canterbury Justin Welby has spoken of the “utterly heart-breaking” attacks in Paris earlier this month, during an interview for the BBC television worship program Songs of Praise. 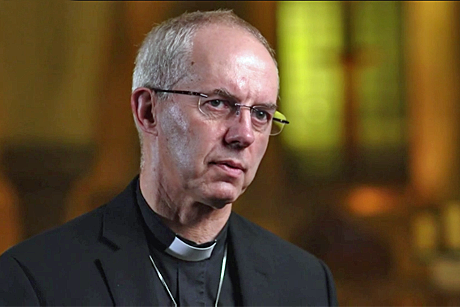 “My wife and I lived in Paris for five years and it was one of the happiest places we have lived; and to think of a place of such celebration of life seeing such suffering is utterly heart-breaking,” he told presenter Aled Jones.

Asked where God was in this, Welby said that “He is alongside, with that deep involvement in the suffering and pain of the world that took him to the cross”; and he admitted that when such atrocities occur, his faith is put to the test.

He said that as he was out walking on the day following the attacks, “I was praying and saying ‘God, Why? Where? Why is this happening? Where are you in all this?’; and then engaging and talking with God. Yes, I doubt.”

As he prayed, he sensed God answered him in the words of Psalm 56 – “He stores up our tears in a bottle,” he said. “None of our sufferings are lost.”

He criticized the perpetrators of the attacks for the way they had misused religious belief. “Religion is so powerful in the way humans behave that it has always been a tool used by the wicked to twist people into doing what they want them to do,” he said.

“Yes, [the terrorists] do believe that [they are doing it to glorify God], but just because someone believes something deeply wrong, it doesn’t mean that they are right in some strange way just because they put God in it.

“The perversion of faith is one of the most desperate aspects of our world today.”

He said that he, like others, felt the instant reaction of “an eye for an eye;” but added that “two injustices do not make justice. If we start randomly killing those who have not done wrong, that’s not going to provide solutions.

“Governments have to be the means of justice – the Bible tells us that they are put there by God with the sword for justice – but they also have to lead us into a place where peace can be established.”

Welby was joined on the program by Cardinal Vincent Nichols, leader of the Roman Catholic Church in England and Wales. He said that it had taken him “quite a while” to come to terms with the reality of what happened when “people who had just gone out for a drink, gone out for a meal, gone out for a football match and were not coming home [and] had just been slaughtered.”

On the question of faith and the terrorists’ motives, Nichols said that: “Often, society looks on faith as a problem. But at moments like this we have to recover our sense of living in the presence of God and see that as a great strength.

“I think the purpose that terrorists have in mind is first of all, to make us live in fear; secondly, to breed hatred within us; and thirdly and consequently, to strike divisions within our society, to split us apart. I have been trying to stress the importance of resisting those three things.

“I think their intention is deeply distorted in terms of any claim of a religious motive. And, as Pope Francis has said, their actions are a blasphemy against God. So rather than with any rationality or validity claiming to act in the name of God; this is an absolute blasphemy for everything that God stands for.”

He called for strong action to be taken against those responsible, saying: “Terrorists, and those who persecute and belittle people in the most terrible ways, have to be stopped. The decision about how best to stop them is a political and a military judgment; but there is no doubt that strong action has to be taken.”

The Songs of Praise program is one of longest running televised worship program in the world. It does not broadcast church services, but a mixture of hymns and worship songs interspersed with testimonies and interviews.

The worship element is predominantly, if not exclusively, Christian; from a variety of Church traditions. This week’s edition featured an interview with Imam Ibrahim Mogra, the assistant secretary general of the Muslim Council of Britain.

He said that he learned of the atrocities with “absolute shock”, continuing: “And what made it worse was that these perpetrators claim to have done it in the name of God. Far from it. This was Satan’s work and they did the bidding of the devil.

“Islam totally condemns this kind of murderous atrocities wherever they take place; and our thoughts and prayers are with those who have lost their loved ones.”

World continues to mourn attacks
Memorial services continue to be held around the world for the victims of the terrorist attacks; including at the Holy Trinity Cathedral in the Fijian capital Suva, where 130 candles were lit yesterday (Sunday) to represent the lives lost after the attacks in Paris.

The service also remembered the victims of other terrorist atrocities, including the Nov. 20 attack on a hotel in Bamako, the capital of Mali; recent attacks in Lebanon, Iraq, Syria, and Turkey; and the 224 passengers and crew of Metrojet flight 9268, which exploded over the Sinai Peninsula en route from Cairo to Saint Petersburg.

“There is no excuse whatsoever for these acts of terror, especially in the name of God,” Fiji’s acting prime minister Aiyaz Sayed-Khaiyum told the congregation.

“Paris, France, and the democratic world have been targeted through these inhuman actions. The victims of the attacks, 130 dead and more than 350 injured were just ordinary people leading ordinary lives, enjoying an evening in restaurants, listening to a music concert or watching a football game.

“The attacks in Paris, as is the goal of terrorists, were, yet again an unspeakable attempt to bring hate and terror in people’s hearts, by taking life of fellow human,” he said.

Another service was held at St John the Baptist Church in Cardiff on Sunday, bringing together members of the diplomatic community in Wales.

The president of the principality’s consular association, the Indian Honorary Consul Raj K Aggarwal, said: “It is essential that we held this event of remembrance in Cardiff for those who were killed in Paris last week. . . We must remember those who were so needlessly killed and we need to let all nations know, the French, Germans, Belgian, Portuguese and of course our own countrymen, that we stand together and that we care.

“This attack on France in Paris was an attack on Cardiff, an attack on Wales and the UK. We must show the French that it will not be forgotten just because it happened 200 miles away across the English Channel. We support the French people and our consular colleague, Marie Brousseau-Navarro.”

Brousseau-Navarro, the French honorary consul in Wales, said: “I am very grateful to my colleagues of the Consular Association in Wales and to our great friends for organizing the event. As France is struck in its heart in Paris for the second time this year, French people know that they can count on the strong reaction of solidarity from the UK and Wales. We are touched by the many demonstrations of support in Wales and throughout the world.

“Our thoughts are with the families of the victims and our compatriots in France and as our communities remain united and strong together, I thank you all for your compassion, support and solidarity.”