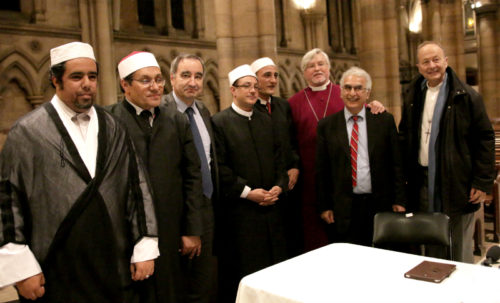 Religious leaders, Muslim theologians gather at the Cathedral of the Holy Trinity in Paris for a Nov. 17 conversation about peacemaking. Photo: Jere Skipper

[Episcopal News Service] A few days after a series of terrorist attacks devastated France and Lebanon, Muslim and Christian leaders gathered in Paris on Nov. 17 for an evening of discussions about peacemaking efforts and the role of religion in education, promoting dialogue and bringing an end to violence around the world.

The event was hosted by the Cathedral of the Holy Trinity (Anglican/Episcopal) in Paris, and led by a panel of Muslim theologians who are members of the World Union of Experts of Islam for Peace and Against Violence. Roman Catholic and Protestant leaders also attended the gathering.

The evening was held at the initiative of Jean Maher, president of the Franco-Egyptian Association for Human Rights, at the invitation of Bishop Pierre Whalon of the Convocation of Episcopal Churches in Europe.

In opening remarks for the evening, Whalon quoted The Episcopal Church’s statement on interreligious relations in Toward Our Mutual Flourishing, commended by the 2009 General Convention. “We acknowledge that ‘Jesus is Lord,’ and that he commanded us to love our neighbors. In order to do so, we must first come to know our neighbors, through dialogue. So dialogue with Muslims is required by our faith,” said Whalon, who was part of the commission that produced the report.

The Union of Experts, founded just four months ago, already comprises 500 Muslim dignitaries from around the world – Sunnis, Shi’ites, and Sufis – and “it has no ties to any organization or government,” said Sheik Mustafa Rashed, imam from Australia and president of the union. The group aims to promote peace between peoples and religions, and is calling for reforms within their own tradition.

“There are acts of violence committed, like those in Paris on Friday night, that can be attributed to a false teachings of hatred [that foment violence in the name of Islam],” said Rashed. “We want to update this sort of teaching, now that we have done a complete evaluation of it. We are at a turning point. We are cannot rewrite the Qu’ran. But there is enormous latitude in the interpretation of its verses. Those that evoke violence must be contextualized in light of history; they are no longer applicable.”

“There are 660,000 hadith [sayings], but only 2,240 are true,” he added. “There is an immediate action to take, and another that is very long-term – a reform of Muslim teaching. That has never before been done … We have launched a reform coming from inside Islam to train imams who reject violence.”

After the imams’ speeches, the Most Rev. Michel Dubost, Roman Catholic bishop of Evry and president of the French Bishop’s Council for Interreligious Affairs, and Pastor François Clavairoly, president of the Protestant Federation of France, praised this fresh, new initiative and called for renewed dialogue with Muslims.

In his concluding remarks, Whalon observed that the teachings of all religious traditions are potentially susceptible to extremist views and violence. “Christianity has no moral high ground historically. The wars of religion in the seventeenth century left a third of Europe’s population dead, all in the name of the Prince of Peace. Dialogue is the only way forward.”

Finally, at Whalon’s invitation, Rashed concluded the evening with a prayer in Arabic.

Church services and vigils have been held throughout the world in response to the terrorist attacks on Nov. 13 in Paris which killed at least 129 people.

However, the Nov. 17 discussion at the cathedral had been planned well in advance of the terrorist attacks and was part of the project Islam et Vivre ensemble, a series of meetings and events linked to the International Day of Tolerance (Nov. 16). From Nov. 10-20, the imams are making their voices heard in Brussels and in Paris. Scheduled events include participation in various conferences and high-level meetings at the European Parliament (Brussels), the Ministry of Foreign Affairs (France), the Assemblée Nationale and the Senate (France), and UNESCO.