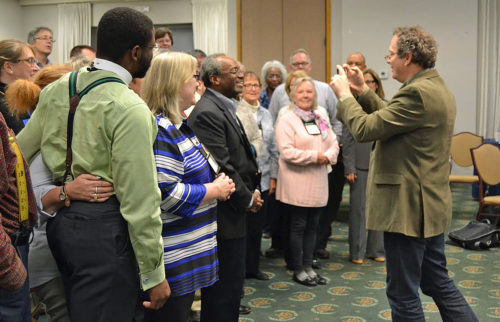 Members of Executive Council and staff of the Domestic and Foreign Missionary Society make a video greeting Nov. 16 for council member Diocese of Southwest Florida Bishop Dabney Smith who was absent from the meeting due to some health issues. The Rev. Frank Logue, council member from the Diocese of Georgia, served as videographer. Photo: Jim Simons/ via Facebook

“This was a good meeting,” Curry said in a news conference after the meeting adjourned. “It was a joy-filled meeting but, joy, unlike giddy happiness, is a deeper thing. It’s not just a response to being happy in the neighborhood. Joy has to do with our joy in being in Jesus Christ. So we could be joyful and serious about the work God has given us to do.”

Curry said council’s work was done “in the context of a real, deep commitment to following the way of Jesus; to take that more seriously and to go ever deeper in that and to commit evangelism in the best sense of that word, evangelism and racial reconciliation as the beginning of broader ways of human reconciliation.”

Council members cried over recent attacks in Paris and Beirut and when they heard about the transformative experiences during a recent young adult pilgrimage to Ferguson, Missouri, Curry said.

House of Deputies President the Rev. Gay Clark Jennings noted that this was mainly an organizational meeting for council. The 2016-2018 has not yet begun but 19 new members, whose terms expire in 2021, joined their colleagues whose terms end in 2018 to begin their service. Council’s five joint standing committees began looking at the scope of their work for the coming triennium and examined General Convention resolutions that were referred to them for action in the coming three years, she said.

Jennings told the council in her closing remarks that she appreciated what she called the “generous” spirit of the meeting and reminded the members that they had been talking about being elastic in response to change. “I do hope we will embrace the notion of being elastic,” she said.

General Convention’s call for the church to focus on evangelism and racial reconciliation was front and center as council organized itself. Curry refused during the news conference to claim to be the originator of that dual call. Saying that convention “spoke with some remarkable clarity that I really believe that is of the spirit of God,” the presiding bishop said. “It wasn’t just Michael Curry. I think this was bigger than Michael Curry; this was the General Convention.” 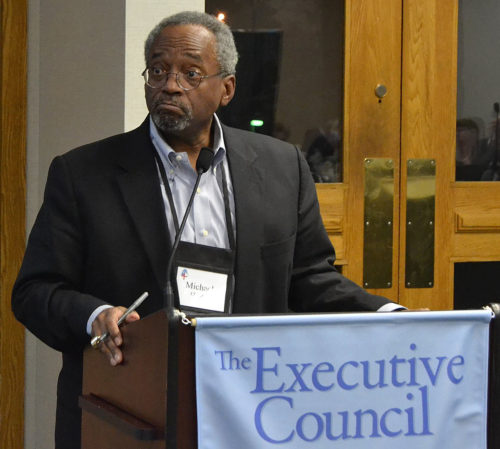 Curry added that evangelism and racial reconciliation are “intimately related,” noting that the Holy Spirit brought together disparate groups on Pentecost. Those groups eventually found a way to become a new community based on the sense that those who follow Jesus are family. “This is the gospel’s work and our General Convention claimed that work anew,” he said.

Both Curry and Jennings described how they see the church’s work on evangelism and racial reconciliation proceeding. The presiding bishop said he envisions The Episcopal Church engaged in evangelism on two levels. One would be centered on planting and nurturing new churches as well as helping existing churches find ways to expand their reach into their surrounding communities. The second part of the work, he said, ought to involve nurturing as followers of Jesus “the actual Episcopalian who is sitting in the pews Sunday by Sunday” so that they are intentionally living as Christians and growing in the authentic “capacity to share and bear witness to the faith that’s in them.”

“That’s the probably the longer-term impact and the one that will take more time and more intentional work,” he said.

When people learn how to tell their faith stories they help build “a church that comes alive in some new ways,” Curry said, adding that those individual Episcopalians will then “have an impact in the world and in lives in ways that we could never program.”

Imagine, he said, if the nearly 2 million Episcopalians did this. “We could change the world.”

Jennings said racial reconciliation “is a hugely complex complicated set of issues and concerns, and there are any number of ways to dive into this.” Convention Resolution C019 charges the president and vice president of the two houses of convention “to lead, direct, and be present to assure and account for the Church’s work of racial justice and reconciliation,” Jennings noted.

Those officers, plus the Rev. Michael Barlowe in his role of secretary of convention, have been meeting to discuss how to move the church forward, she said. It became clear, Jennings said, that was important to heed the advice of Deputies Vice President Byron Rushing who urged that “before we started planning, we need to listen and to listen deeply and carefully to people who are on the frontlines doing this work who can inform whatever plan or strategy we develop to engage every Episcopalian in this vital gospel-based work,” according to Jennings.

The officers are arranging some hearings and developing a list of people to whom they want to listen. Jennings predicted that the group would have more information to share with the church in the first quarter of 2016.

Council took a step in doing its own work around racial reconciliation during a session Nov. 16 with Brite Divinity School theology professor Keri Day. Day challenged the council to struggle with her contention that the Christian church has been and still is situated in what she called “America’s racist democratic ideal.”

Many liberal Christians, as well as many liberal Americans in general, believe that the democratic ideal is a “moral blueprint” from which the country has strayed, Day said. However, she said, that the ideal is rooted in what she called white supremacy. Such supremacy is about how economic and political power accrues to whites in the United States and thus systematically excludes others. 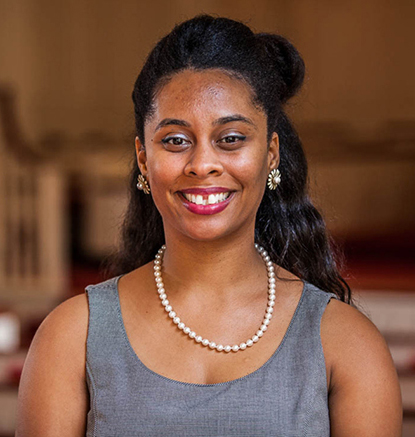 Thus, she said, there has always been a “real Darwinian barbarity” at the heart of the construction of American culture. Americans have failed to value all lives in their conception of democracy from the very beginning, Day said.

Such truth-telling, she acknowledged, can be risky. And some council members said during their discussion with Day that they wonder about how to encourage Episcopal Church congregations to struggle with racism in U.S. culture and in themselves.

Heidi Kim, Domestic and Foreign Missionary Society missioner for racial reconciliation, facilitated a discussion among council members and staff after Day’s presentation. She suggested that each person was probably reacting differently to what Day had said. For some, it was “brand new information” and for some “it’s the kind of thing we’ve been reading and doing and engaging in and been up to our ears in for a very long time, and trying to talk about it and not getting anywhere.” None of the experiences on that spectrum of reaction is right or wrong and none makes for experts or rookies.

“The point of Dr. Day’s presentation today was to stir up the Holy Spirit among us,” she said.

“I don’t think there’s anything more important for us to do than to embrace this task,” said Navajoland Bishop David Bailey. “If we do it well, it’s something we can give to the rest of the church. But until we’re willing to step forth and invest the time, the energy and the pain that’s involved with this, all the work we do in Executive Council is truly not going to matter.” Doing that work, Bailey said, “would truly be a gift to the rest of the church.”

In other action on Nov. 18, council also:
* heard a report about the Oct. 8-12 Young Adult Pilgrimage to Ferguson, Missouri, from three staff members, including Kim, Chuck Wynder, Domestic and Foreign Missionary Society missioner for social justice and advocacy engagement, and Bronwyn Skov, Domestic and Foreign Missionary Society officer for youth ministries. Kim said the pilgrimage was meant to be an experience of spiritual transformation and formation rather than a conference or a training session on activism. The planners’ goal, according to Skov, was not to give the young adults a mountain-top experience but instead to create a “very uncomfortable space in which the Holy Spirit could hopefully dig in and work.” Staff was available to assist the pilgrims as they needed. As it turned out, she said, “There was a lot of white guilt in the room that many of us didn’t know how to deal with it.” Wynder said that the group went “beyond the black and white binary.” Of the 25 participants, 10 were white, 10 were black and the remaining five were Latino, Native American and Pacific Islander. 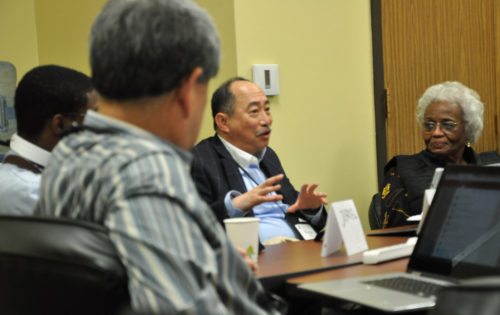 * heard that Curry and Jennings have established an ad hoc legal review committee to assess the current legal functions as well as the legal needs of both the council and the Domestic and Foreign Missionary Society. The committee comes in anticipation of the new position of chief legal officer that General Convention created by way of a rewrite of Canon 1.4. The canonical change goes into effect in January. The ad hoc committee will also develop a job description for the process.

* met in executive session for about 45 minutes during the morning. In moving to go into the closed session, council member Fredrica Thompsett said the session would “consider a couple items stated in Bishop Stacy’s report, one concerning Haiti and the other concerning some staff and personnel issues.” Chief Operating Officer Bishop Stacy Sauls had spoken to the council Nov. 17 about the organization and responsibilities of the church-wide staff. His presentation was part of the typical council orientation that happens at the start of each triennium.

A summary of the resolutions council passed is here.

As the final morning session got underway Nov. 18, Barlowe told the members that a concealed audio recording device had been found on the floor of the plenary room near the table where he, Curry, Jennings and other members had been seated during the plenary sessions. He asked council members to check their tabletops and to look under their tables for any additional devices. Barlowe also said that his staff was checking to see if there were security tapes that could be reviewed to determine what happened.

The Executive Council carries out the programs and policies adopted by the General Convention, according to Canon I.4 (1)(a). The council is composed of 38 members, 20 of whom (four bishops, four priests or deacons and 12 lay people) are elected by General Convention and 18 (one clergy and one lay) by the nine provincial synods for six-year terms – plus the presiding bishop, the president of the House of Deputies. In addition, the vice president of the House of Deputies, secretary, chief operating officer, treasurer and chief financial officer have seat and voice but no vote.