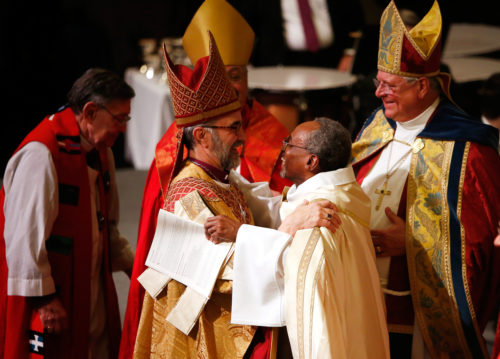 About 2,000 people filled the pews at the First United Methodist Church of Dallas with more than 30 bishops in attendance, including Presiding Bishop Michael B. Curry who served as chief consecrator for the first time since his installment on Nov. 1.

The service, which lasted about two and a half hours, showcased the traditions of the church and diocese in a spectacular array of aesthetics and music. Before the procession, the Dinka Children’s Choir, from Church of the Ascension, performed songs and danced to the beat of African drums. Sumner, who had requested the choir perform at the consecration, sneaked onto the balcony to watch.

Throughout the service, a choir formed from several parishes, sang hymns accompanied by an orchestra and organ, which was directed by Scott Dettra, from Church of the Incarnation. The nationally renowned L. Graham Schultz, also from Incarnation, performed as organist. Musicians from St. Philip’s in Frisco played contemporary music.

Before the consecration and ordination, bishops dipped their rings into hot melted red wax and pressed them to Sumner’s consecration certificate as an official seal of their endorsement.

Sumner, who was elected on the fourth ballot during a special convention in May, after the retirement of the Rt. Rev. James Stanton, had previously worked as principal of Wycliffe College in Toronto. Sumner, 60, began his career as a priest in western Massachusetts in 1981 before going on to serve, among other places, in East Africa and on an American Indian reservation. He has degrees from Yale Divinity School and Harvard.

The procession began with members of each church and school in the diocese carrying their organization’s banner, followed by more than 100 clergy dressed in white choir vestments with red stole, and about 30 bishops donned in rochet and chimere.

The Most Rev. Josiah Idowu-Fearon, secretary general of the Anglican Communion, congratulated the diocese on its new bishop and read a statement from Archbishop of Canterbury Justin Welby.

The Rt. Rev. Stephen Andrews, bishop of the Diocese of Algoma in Canada, gave the sermon and lamented that Sumner would be missed in Canada and at Wycliffe College. He added that Sumner is equally administrative and pastoral but preached that it’s the pastoral role that is most important in the work of a bishop.

“If the Episcopal office is governed by management principles, or if ministry on the soccer field is a strategy for church growth, there is a problem,” Andrews said. “For if the bishop’s primary allegiance is either to the Church or to the world he is not pursuing a vocation but a job. And in a job, human concerns take priority over what may be God’s concerns.”

Andrews went on to say that leadership has never been easy in the church, and administrative duties are inevitable because a bishop must serve the church, keep its members happy, lead a few programs and preach sermons; however his or her primary existence in the role must be to serve God above all else.

Andrews pointed to a quote from former chaplain to the U.S. Senate, Richard Halverson, who said the church sometimes strays from its goals to serve God because it focuses inevitably on organizational politics. “We don’t want ministers anymore we want CEOs. We don’t want prophets we want politicians. We don’t want Godliness we want experience. We don’t want spirituality we want efficiency. We don’t want humility we want charisma… ,” he said. “We have thousands and thousands of churches in this country whose ministers are very qualified to do what the Church asks of them. One thing that hasn’t been asked of them is to serve Jesus. So they don’t.”

Serving as a bishop is a humble affair, Stephens said, because as a steward, a bishop has no significance of his or her own because the bishop exercises no personal authority, all the power comes from God. Therefore arrogance, ambition and competition, that is prominent in the secular world has no place in the leadership of the Church, he said.

During the consecration the bishops circled around Sumner to lay their hands on him in continuance of the apostolic succession and said, “Therefore, Father, make George a bishop in your Church. Pour out upon him the power of your princely Spirit, whom you bestowed upon your beloved Son Jesus Christ, with whom he endowed the apostles, and by whom your Church is built up in every place, to the glory and unceasing praise of your name.”

Sumner was presented with the gifts of office including a Book of Common Prayer, from diocesan staff, a crozier on loan from St. Matthew’s Cathedral, a pectoral cross from the faculty of Wycliffe College, vestments from retired Bishop James Stanton, a mitre from Good Shepherd in Dallas, and a Bible from Curry. He was also given a ring on temporary loan from the Dallas diocese while a permanent ring is being made – a gift from diocesan clergy and Church of the Incarnation.

Sumner’s wife, Stephanie Hodgkins, daughter, Marta Hodgkins-Sumner, and son, Samuel Hodgkins-Sumner proudly watched as the new bishop told the crowd that he was honored. “I’m grateful for the gift of being among you in the Diocese of Dallas,” he said. “It is a great blessing for me.”

The ceremony concluded with Holy Eucharist and was followed by a reception.

Early in the service, Curry summed up what would be the tone and mood of the entire consecration when he said, “It really is as that old gospel song says,” ‘Oh happy day. Oh happy day.’ ”