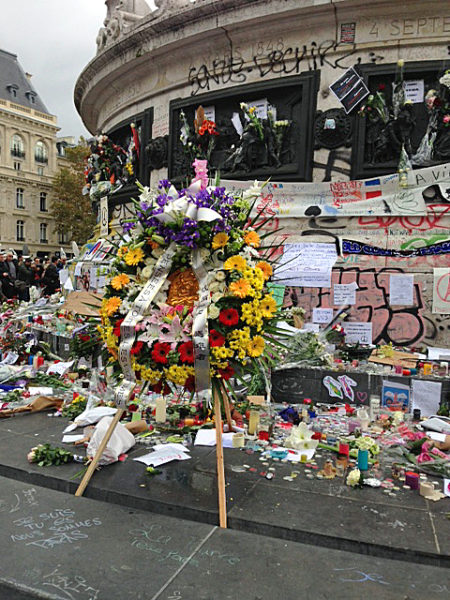 In the wake of the Nov. 13 attacks on their city, Parisians brought their tributes, hopes and prayers to the Place de la République. Photo: Lucinda Laird.

[Episcopal News Service – Linthicum Heights, Maryland] The Episcopal Church Executive Council said Nov. 16 that Episcopalians should respond to recent attacks in Paris and Beirut with both prayer and discernment.

Council expressed its “sorrow and grief for those who died, those injured, and those for whom peace has been shattered by the recent acts of terrorism in Paris and Beirut.” The statement came by way of a resolution that council’s  Joint Standing Committee on Advocacy and Networking had crafted the day before.

The council’s action came on the heels of Presiding Bishop Michael B. Curry’s call last Friday for all Episcopalians to engage in prayer in response to the terrorist acts in Paris. Curry’s message, presented in video form, is available on The Episcopal Church’s website and its Facebook page. As of the morning Nov. 16, the presiding bishop’s statement had received more than 370,000 views on Facebook.

And, council members agreed to take up a collection dedicated to the efforts of Convocation of Episcopal Churches in Europe Bishop Pierre Whalon and the Very Rev. Lucinda Laird, dean of the Cathedral of the Holy Trinity in Paris (also known as the American Cathedral in Paris), to assist people suffering in the aftermath of the Nov. 13 attacks in Paris. Council member Bishop Clifton Daniel, bishop provisional of Pennsylvania, proposed the collection and his colleagues agreed with no debate.

The resolution said that council received the challenge Whalon issued the day after the Paris attacks to “remember God shows love for us precisely by putting off the divine power that we crave.”

“The day after this heinous attack, we may wish for God to come down and wipe out our enemies” Whalon wrote, as the resolution notes. “Instead, Christ on the cross, completely powerless at the last, shows us that it is only love that can overcome hatred, evil and even death.”

The council also said it accepts “the exhortation” from Laird asking that people pray “for the victims, those who died and those wounded; for their families; for all those who have helped and are helping; for all who protect us; for the city of Paris, and especially our Cathedral community; for all those whose anger, fear and hatred lead them to commit such acts…”

The resolution also calls on Episcopalians “to turn to Jesus and pray for guidance, wisdom, and courage as we seek God’s path of grace and peace even in the darkness of this current moment.”

And, “A Litany of Peace in the Holy Land”is suggested for use during Advent 2015 “as an act of prayerful remembering.”

The Executive Council carries out the programs and policies adopted by the General Convention, according to Canon I.4 (1)(a). The council is composed of 38 members, 20 of whom (four bishops, four priests or deacons and 12 lay people) are elected by General Convention and 18 (one clergy and one lay) by the nine provincial synods for six-year terms – plus the presiding bishop, the president of the House of Deputies and the vice president of the House of Deputies.