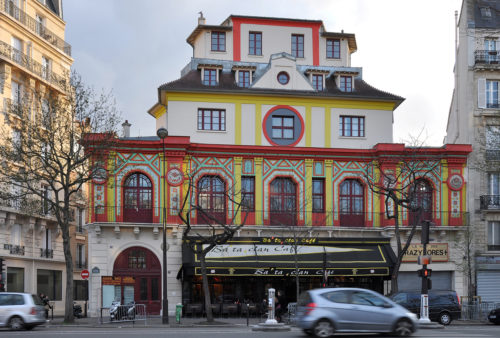 The Bataclan Theatre in Paris, scene of one of the Nov. 13 deadly terror attacks, pictured here in 2008. Photo: Wikimedia

[Anglican Communion News Service] Church leaders around the world have offered prayers and messages of solidarity after the series of terrorist attacks in Paris last night which left at least 127 people dead and many more fighting for their lives.

“I am deeply shocked by the terrible tragedy which has befallen the city of Paris,” the head of the Church of England’s Diocese in Europe, the Rt .Rev. Robert Innes, Bishop of Gibraltar in Europe, said. “I offer my fervent prayers for the families who have so brutally and suddenly lost loved ones, and for all who are struggling with serious injury.

“As a diocese we want to express our solidarity with the people of France at this dark time. Acts of terror against innocent people are totally abhorrent. We pray for deliverance from evil and that all the perpetrators and their accomplices are swiftly brought to justice.”

In a message to the two Church of England churches in Central Paris – St. George’s in Rue Auguste-Vacquerie and St. Michael’s in Rue D’Aguesseau – the Suffragan Bishop in Europe, the Rt. Rev. David Hamid, said: “Once again violence and terrorism have struck France and the world is in shock. The numbers of dead and injured in the attacks across Paris must make this one of the deadliest of such crimes.

“Across the diocese this weekend we will be praying for the people of Paris at this time of national mourning, distress and fear. We pray for all who have died that our Loving God will welcome them into his arms. We pray that God will comfort all who grieve, as well as the injured and the fearful.

“And we pray that terrorism may be overcome and violent hearts turned to paths of peace.

“In the face of hatred we pray that we may show forth love, and in this time of despair we remember our calling to be lights in a darkened world. May the peace of the Lord be with you.”

The Cathedral of the Holy Trinity in Paris, part of the Convocation of Episcopal Churches in Europe, was closed on Saturday due to the attacks and as a result had to cancel its Junior Guild Christmas Fair; but officials said that Sunday’s services would take place as usual, with a smaller Christmas Fair taking pace after its 11 a.m. service.

“Please come. We need to be together and to pray together,” the Very Rev. Lucinda Laird, dean of the cathedral, said. “Please keep our cathedral community and the city of Paris in your prayers – especially the victims and their families. Most of all, pray for peace.”

And, as the Paris attacks were unfolding and the extent of the carnage became known, Convocation Bishop Pierre Whalon took to Twitter (@bppwhalon) and Facebook to update followers and to call for prayer. In a early tweet he wrote, “Je prie pour notre ville, les victimes, les forces de l’ordre, et nos ennemis. Rejoignez-moi: Seigneur, prend pitié.” (“I pray for our city, the victims, law enforcement, and our enemies. Join me: Lord, have mercy.“)

Archbishop of Canterbury Justin Welby described hearing of the “desperate news of deep tragedy.” In a Tweet as the situation was being played out in the French capital, he spoke of the many broken hearts, and said: “We weep with those affected [and] pray for deliverance and justice.”

Episcopal Church Presiding Bishop Michael Curry, urged “all Episcopalians and people of good will and faith to pray for those who have died, those who are in harm’s way, those who seek to help in any way; and to pray for us as a human family.” In a video message, he asked people watching to join him in praying the Lord’s prayer.

The Church of England has published a collection of prayers for peace on its website: “Compassionate God and Father of all, we are horrified at violence in so many parts of the world. It seems that none are safe, and some are terrified. Hold back the hands that kill and maim; turn around the hearts that hate. Grant instead your strong Spirit of Peace – peace that passes our understanding but changes lives, through Jesus Christ our Lord.”

Guy Liagre, general secretary of the Conference of European Churches, said that the organization “grieves the loss of life and mourns with all those affected by this enormous tragedy. We pray for the victims, their families and friends, and for the men and women who risked their own lives last night in service to others.”

He continued: “These tragic events impels CEC to strengthen our peacebuilding and reconciliation work. We must strive to follow the words of the Psalms – depart from evil, and do good; seek peace, and pursue it.”

“We must continue, on the basis of our Christian faith, to uphold our values. We work towards a humane, socially conscious Europe, in which human rights and the basic values of peace, justice, freedom, tolerance, participation and solidarity prevail,” he said, citing the 2001 Charta Oecumenica.

In Canada, the Council of the General Synod paused its Friday evening meeting as news of the attacks filtered through. Archbishop Fred Hiltz led prayers for those affected by the tragedy.

In Australia, prayers for Paris were said every half hour at St. Paul’s Cathedral in Melbourne. “On behalf of Australia’s Anglicans, I express our deepest sympathy for and solidarity with the people of Paris in their fear, pain and mourning,” Archbishop of Melbourne Philip Freier, said. “I greatly fear that in the 21st century events like this are going to become much more common, but they will never lose their capacity to shock.

“We pray for comfort for the victims, those who love them and tend them, and for those who are appalled and devastated by these vicious attacks. We pray also that calm and wise leadership will prevail, especially in the face of a possible backlash against the innocent. . . 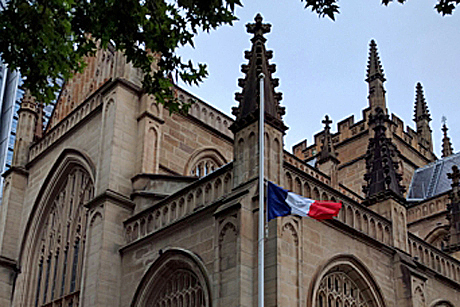 A French flag is flying at half-staff at St. Andrew’s Cathedral in Sydney, where the Prime Minister of New South Wales, Mike Baird, will attend a special prayer service for Paris on Sunday. “It is difficult to comprehend the barbarity of such attacks but we mourn with those who mourn and weep with those who weep”, the Archbishop of Sydney, Dr Glenn Davies, said.

“We pray that God in his unfailing love will comfort the people of Paris, especially those who have been injured and the families and friends who have lost loved ones,” he said.

The Anglican church in Lille, northern France has opened its doors today “for people to come and pray and seek the Lord’s comfort after a night of events which are horrific to try and comprehend.”