[Episcopal News Service] Presiding Bishop Michael B. Curry began his sermon commemorating Episcopal Relief & Development’s 75th anniversary by quoting gospel singer Mahalia Jackson who sang, “‘If I can help somebody along the way … my living shall not be in vain.’”

It was in this spirit and a joy and privilege to gather to give God thanks for “the miracle that God has done through the ministry, the work and the witness to the way of Jesus through Episcopal Relief & Development, the Presiding Bishop’s Fund for World Relief and the movement that gave birth to it all,” Curry said.

Some 200 people gathered Nov. 11 at St. James’ Church on Madison Avenue in New York where Curry preached at a special Eucharist, the start of a daylong international symposium, a capstone event of Episcopal Relief & Development’s yearlong 75th anniversary celebration. Diocese of New York Bishop Andrew Dietsche presided at the Eucharist.

During his welcome, Robert W. Radtke, president of Episcopal Relief & Development, explained how the promises that Episcopalians make in the Baptismal Covenant are also the basis of the organization’s ministry.

“Episcopal Relief & Development is a ministry founded on our deepest values as Christians. To seek and serve Christ in all people and to respect the dignity of every human being, these are promises that Episcopalians renew every time we baptize a new member of our church,” said Radtke, adding that those promises were renewed 10 days ago at Curry’s installation.

During a welcome to the afternoon’s international symposium, Curry, who before being installed as presiding bishop chaired Episcopal Relief & Development’s board of directors and now serves as honorary chair, said, “As you well know, the theme ‘Healing a Hurting World’ really is at the heart of the work of Episcopal Relief & Development; that we as people of faith refuse to be satisfied with the world in the way that it is, but are unceasingly committed to a world as God intends for it to be.”

The symposium, explained Curry, was “intended to engage the issues that are before us and how we as people of faith can engage those issues in a way that actually makes a difference for this world and the peoples of this earth.” 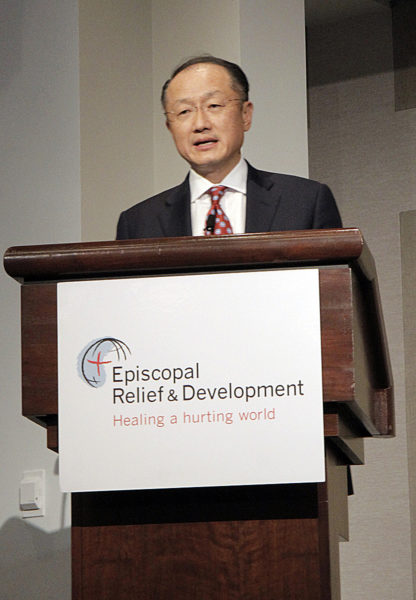 It began with a keynote address from Dr. Jim Yong Kim, president of the World Bank Group, followed by a discussion session and Q & A with Ray Suarez, the host of Al Jazeera America’s “Inside Story.”

A physician and anthropologist, Kim worked in international development for more than 20 years and co-founded Partners in Health, a global health organization, with Dr. Paul Farmer. The pair met while studying together; Farmer introduced Kim to the work of liberation theologians at a time when the world was still caught up in the Cold War.

After trying to make sense of the world through social theory, Kim and Farmer kept coming back to the question, “what is to be done in the world?” And they were looking for an organizing principle around which they could move forward, take action and feel that they were doing the right thing, said Kim.

The pair was inspired by people like Gustavo Gutiérrez Merino, the founder of liberation theology, who worked with the poor in Peru.

It’s “work that put substance to this notion of a preferential option for the poor,” he said, adding that liberation theologians developed a simple method based on seeing, judging and acting when engaging poor communities, whereby work in poor communities begins not with programs but rather by asking, “What is the nature of your reality? What do you make of that reality and what is to be done?”

Kim, who became president of the World Bank in 2012, explained that one of its goals is to end extreme poverty by 2030.

“We are the first generation in human history that can see the end of extreme poverty,” said Kim, adding that in 1990, 36 percent of the people in the world were living in extreme poverty and the world seemed stuck with that old notion of “‘the poor will always be with you,’ but now we’ve put an end date for poverty.”

Now, for the first time in history, said Kim, the percentage of people living in extreme poverty has fallen below 10 percent. He said 9.6 percent is the estimate for 2015 but that’s still 700 million people, half of whom it’s estimated by 2020 will be living in so-called fragile and conflict states. That number is expected to rise to 90 percent by 2030.

The role of faith-based organizations in alleviating extreme poverty “is extremely important,” he said.

“We have three things that we need to do to lift everybody out of extreme poverty. The first is to grow the economy but not any kind of growth, we have to see economic growth that benefits the poorest; we have to invest in people. There’s overwhelming evidence that investing in health and education is not just good for health and education, it’s good for economic growth …. And finally, we need to ensure that people do not fall back into poverty by no fault of their own.” 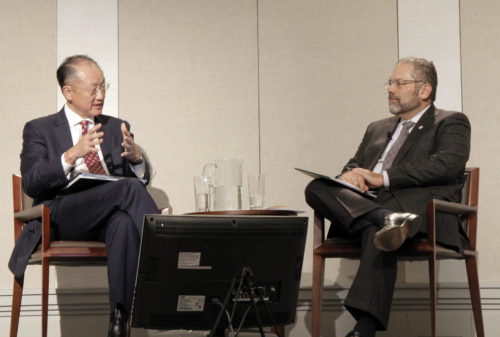 Dr. Jim Yong Kim’s keynote address was followed by a discussion session and Q & A moderated by Ray Suarez, the host of Al Jazeera America’s “Inside Story.” Photo: Lynette Wilson/ENS

Episcopal Relief & Development is an independent non-profit organization that works closely with Anglican Communion and ecumenical partners to help communities rebuild after disasters and develop long-term strategies to create a thriving future. The agency was formed 75 years ago as the Presiding Bishop’s Fund for World Relief in response to the suffering caused by war in Europe.

“Over these years, Episcopal Relief & Development has played a significant role as an expression of the Gospel call to respond to human need with loving service,” wrote Archbishop of Canterbury Justin Welby, in an Oct. 22 letter of congratulations marking the organization’s anniversary, that was read during the Eucharist by the Rev. Rachel Carnegie, co-executive director of the Anglican Alliance.

“For 75 years, it has reflected its central vocation of proclaiming the good news of Jesus Christ through relief and development work, alongside partners and supporters across the Anglican Communion. Taking its inspiration from Matthew 25: 37-40, Episcopal Relief & Development has been standing with the local church in places of need,” said Welby. “In my visits to churches in the Anglican Communion, I have seen first-hand how local congregations, dioceses and provinces seek to tackle poverty, inequality and suffering due to conflict, natural disaster, disease and other causes.”

Throughout 2015, Episcopal Relief & Development, along with Episcopalians and other friends and supporters, have celebrated “75 Years of Healing a Hurting World.” The anniversary was marked by an online weekly storytelling project and a traveling photo exhibit depicting the people and places around the world touched by Episcopal Relief & Development’s disaster relief, public health and economic development ministries.

In September 2014, Episcopal Relief & Development kicked off a $7.5-million anniversary fundraising campaign. During the 75th anniversary celebration, Episcopal dioceses, schools and groups embarked on grassroots efforts to raise awareness and support for the organization’s life-giving programs. As of early November 2015, campaigns and donations from many committed individuals had generated $6.6 million to strengthen programs that touch the lives of more than 3 million people in 40 countries annually.

“It’s been an extraordinary year,” said Radtke when asked by Episcopal News Service to reflect upon the yearlong anniversary celebration, adding that for 75 years Episcopal Relief & Development has benefited from the generosity of Episcopalians from all over the church.

More importantly, said Radtke, Episcopalians’ reaction to the yearlong anniversary has been moving.

“I think it is in the way Episcopalians feel attached to Episcopal Relief & Development. We’ve spent almost 18 months now with a photographic exhibit that’s been traveling around the country and the reaction that people have to our photographs and the stories that those photographs tell has been very powerful,” he said. “I think it’s been extraordinary today to hear both from Dr. Kim and then our panelists around the world about the work of faith groups and Episcopal Relief & Development in particular and the way it touches lives.”