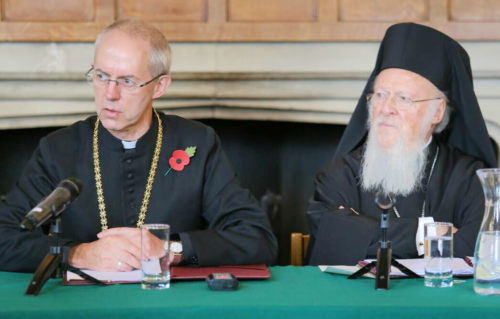 [Anglican Communion News Service] The refugee crisis and the environment were among issues discussed by Archbishop of Canterbury Justin Welby, and the Ecumenical Patriarch, His All-Holiness Bartholomew, during an extended visit by the leader of the Orthodox family of churches to Lambeth Palace, London.

During a private meeting, the Archbishop and His All-Holiness discussed issues facing the Anglican and Orthodox churches and the wider world. This included discussing joint Christian efforts for the protection of the environment, and the urgent social and pastoral problems created by the massive migration from the Middle East.

Later, the two church leaders led an ecumenical prayer vigil in the Lambeth Palace Chapel for those fleeing violence, persecution and poverty.

The two leaders led prayers for all people risking their lives fleeing from conflict, violence and persecution, and those whose existence is threatened by climate change.

Both leaders gave a blessing during the service, which featured the Coventry Litany and intercessions led by members of the Community of St. Anselm.

Prayers were also said for those under immense pressure to develop an effective and equitable response to the refugee crisis, and for those negotiating at the climate change talks in Paris later this month.

Before the vigil, the Patriarch gave a lecture on environmental issues to an audience of faith leaders, scientists and lay church members working on climate change. He spoke of a “crisis of solidarity” being witnessed in our struggle to respond collectively to climate change – as well as the refugee and migrant crisis – and called on Christians to act.

The event also featured contributions from Bishop of London Richard Chartres, Bishop of Salisbury Nicholas Holtam, and the Rev. John Chryssavgis, adviser to the Ecumenical Patriarch on environmental issues.

His All-Holiness is visiting London in response to an invitation issued by Welby when he visited the Ecumenical Patriarch in Constantinople in 2014.