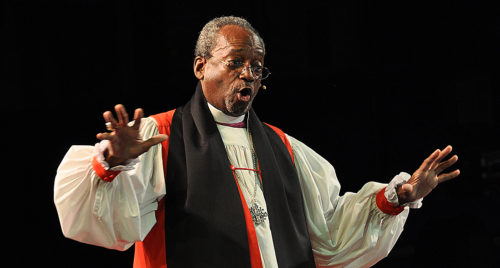 Bishop Michael Curry, shown here peaching in July 2014 at the Episcopal Youth Event in Philadelphia, will be installed Nov. 1 as The Episcopal Church’s 27th presiding bishop and its primate in a historic celebration at Washington National Cathedral. Photo: Mary Frances Schjonberg/Episcopal News Service

[Episcopal News Service] The Episcopal Church will make history Nov. 1 as it celebrates the All Saints Sunday installation of Diocese of North Carolina Bishop Michael Curry as its 27th presiding bishop and its primate.

On that day, Curry, 62, will become the first person of color to hold the position of presiding bishop and primate. The Holy Eucharist with the installation begins at noon EST (daylight saving time ends at 2 a.m. Nov. 1) at Washington National Cathedral. Curry will preach and celebrate the Eucharist.

The service will be webcast live and be available at three different locations:

The live webcast will be closed-captioned for the hearing-impaired.

After the service, on-demand video viewing of the Eucharist will be available here.

Episcopal, Anglican, ecumenical, and interreligious guests will join bishops, General Convention deputies, Executive Council members and other leaders, members and guests of The Episcopal Church for the celebration.

At the beginning of the service, Presiding Bishop Katharine Jefferts Schori, along with House of Deputies President the Rev. Gay Clark Jennings and others, will welcome Curry at the door and participate with him in the early part of the service, which includes questions to him, renewal of the baptismal covenant, Curry’s seating in the cathedral (Washington National Cathedral has been the presiding bishop’s seat since 1941), the handing over of the primatial staff and prayers for the new presiding bishop by representatives of the ecumenical and interreligious communities and the Anglican Communion. Later in the service the readings and the prayers of the people will be read in various languages.

The order of service is available for downloading here.

The day before the installation, the Union of Black Episcopalians will host a Vigil Celebration for Curry at 11 a.m. EDT at the D.C. Armory. The Rev. Canon Sandye Wilson, who will preach at the service, has said the service will be a time to be with Curry and pray with him.

Jefferts Schori will preside at the Eucharist and Curry will celebrate.

There is no charge to attend the vigil and tickets are not necessary; however registration is requested to provide for ample programs, seats, etc. Registration is available here.

The Domestic and Foreign Missionary Society will sponsor a live webcast of the vigil celebration here.

Curry’s election was confirmed an hour later by the House of Deputies, as outlined in the church’s canons, by a vote of 800 to 12. 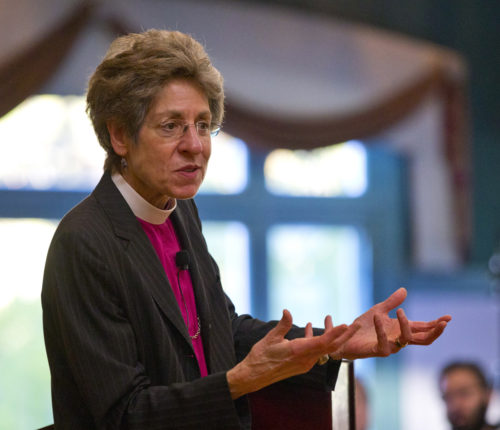 Presiding Bishop Katharine Jefferts Schori, shown here speaking at the Diocese of Newark clergy conference Oct. 26, will complete her nine-term in office at the end of the day Oct. 31. Photo: Cynthia L. Black

This makes the second time in a row that the church will make history with its installation of a presiding bishop. In 2006, current Presiding Bishop Katharine Jefferts Schori became the first woman elected presiding bishop of The Episcopal Church. She was also the first female among the primates, or ordained leaders, of the Anglican Communion’s 38 provinces, a distinction she still holds. Jefferts Schori had been elected June 18, 2006 during the 75th meeting of General Convention.

(The Domestic and Foreign Missionary Society is the legal and canonical name under which The Episcopal Church is incorporated, conducts business and carries out mission.)

According to Title I Section 2, the presiding bishop as chief pastor and primate is “charged with responsibility for leadership in initiating and developing the policy and strategy in the church and speaking for the church as to the policies, strategies and programs authorized by the General Convention.”

The presiding bishop also “speaks God’s word to the church and world as the representative of this church and its episcopate in its corporate capacity,” represents The Episcopal Church to the Anglican Communion, serves as chief consecrator of bishops, and leads the House of Bishops. He or she also holds a significant role in the discipline and changes in status of bishops, according to Title I Section 2.

Also, the presiding bishop exercises a significant role in the governance of the church by making appointments to various governing bodies, making decisions with the president of the House of Deputies, serving as a member of every churchwide committee and commission, and serving as chair and president of key church governing boards. He or she is the chair and chief executive officer of the Executive Council, which is the board of directors for the Domestic and Foreign Missionary Society, according to Canon I.4, and oversees the execution of the programs and policies adopted by the General Convention and carried out by the society.

The staff of the Domestic and Foreign Missionary Society report to the presiding bishop, who is the society’s president, either directly or through a group of senior staff and officers who, according to canon, report and are accountable directly to the presiding bishop. (The office of the General Convention, by canon, maintains a separate reporting structure.) 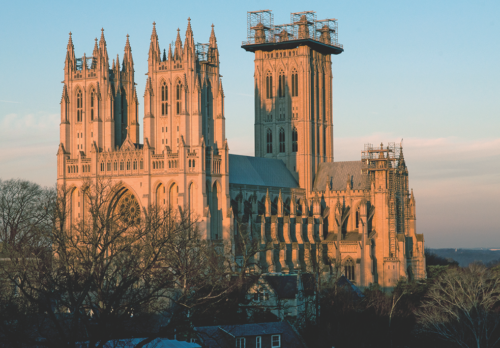 In its “Call to Discernment and Profile”, the joint nominating committee said the 27th presiding bishop would need to be “comfortable in the midst of ambiguity and able to lead the church in the rich, temporal space between the ‘now,’ and the ‘yet to come.’ ” The person discerned and elected by the church would need to “delight” in the diversity of a “multi-national, multi-lingual, multi-cultural, multi-ethnic, and multi-generational church.” And, because “our polity has many components and complexities,” the 27th presiding bishop will need the “skills and wisdom for leading complex and democratic systems through a time of significant change.”

Originally, the office of presiding bishop was filled automatically by the most senior bishop in the House of Bishops, measured by date of consecration, beginning with the presidency of William White at the first session of the 1789 General Convention. That process changed in 1925 when the church elected the Rt. Rev. John Gardner Murray as the 16th presiding bishop.

Presiding Bishop-elect Curry’s past ministry
Born in Chicago, Illinois, on March 13, 1953, Curry attended public schools in Buffalo, New York, and earned a Bachelor of Arts degree in 1975 from Hobart and William Smith Colleges, in Geneva, New York, and a Master of Divinity degree in 1978 from the Berkeley Divinity School at Yale. He has also studied at the College for Preachers, Princeton Theological Seminary, Wake Forest University, the Ecumenical Institute at St. Mary’s Seminary, and the Institute of Christian Jewish Studies.

He was ordained to the diaconate in June 1978 at St. Paul’s Cathedral, Buffalo, New York, and to the priesthood in December 1978 at St. Stephen’s, Winston-Salem, North Carolina. He began his ministry as deacon-in-charge at St. Stephen’s, and was rector there 1979-1982. He next accepted a call to serve as the rector of St. Simon of Cyrene, Lincoln Heights, Ohio, where he served 1982-1988. In 1988, he became rector of St. James’ Episcopal Church, Baltimore, Maryland, where he served until his election as bishop in 2000.

In his three parish ministries, Curry was active in the founding of ecumenical summer day camps for children, the creation of networks of family day-care providers and educational centers, and the brokering of millions of dollars of investment in inner city neighborhoods. He also sat on the commission on ministry in each of the three dioceses in which he has served.

During his time as bishop of North Carolina, Curry instituted a network of canons, deacons and youth ministry professionals dedicated to supporting the ministry that already happens in local congregations and refocused the diocese on The Episcopal Church’s dedication to the United Nation’s Millennium Development Goals through a $400,000 campaign to buy malaria nets that saved thousands of lives.

Throughout his ministry, Curry has also been active in issues of social justice, speaking out on immigration policy and marriage equality.

He serves on the boards of a large number of organizations and has a national preaching and teaching ministry. He has been featured on The Protestant Hour and North Carolina Public Radio’s The State of Things, as well as on The Huffington Post website. In addition, Curry is a frequent speaker at conferences around the country. He has received honorary degrees from Sewanee: The University of the South, Virginia Theological Seminary, Yale, and, most recently, Episcopal Divinity School. He served on the Taskforce for Re-imagining the Episcopal Church and is chair of Episcopal Relief & Development’s board of directors.

His most recent book, Songs My Grandma Sang, was published in June 2015. His book of sermons, Crazy Christians, came out in August 2013.

Curry and his wife, Sharon, have two adult daughters, Rachel and Elizabeth.