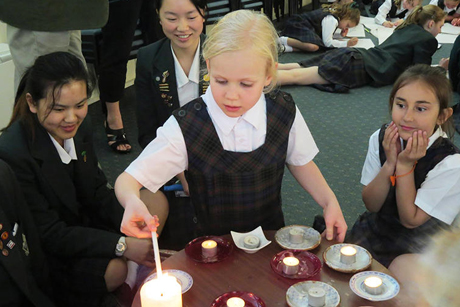 [Anglican Communion News Service] Students from Anglican schools throughout the province of Aotearoa, New Zealand & Polynesia have prayed through the night as part of a 24-hour vigil for the refugees streaming out from Syria across Europe, and into camps in Jordan and Lebanon.

The event has been given the name ASPiRe – Anglican Schools Praying for Refugees – and is being supported by a Facebook page.

Students took turns, an hour at a time, “to pray for Syrians fleeing the hell that has engulfed their homeland,” a provincial spokesman said. The students began their prayer-work at 3pm local time on 15 October and kept the vigil through the night, stopping at 3pm local time on Friday 16 October.

“Hundreds of them are taking part,” the spokesman said. “Dilworth, for example, had more than 100 of its students, across its three Auckland campuses, keeping vigil between 3am and 6am this morning, and more than 100 boarders at King’s College took part, too.

“They embraced sacrifice. For example, the kids at Basden College in Suva and All Saints School in Labasa put up their hands for the graveyard shift, and prayed from midnight to 2am; while St Margaret’s College in Christchurch has young women praying through the whole 24 hours.”

The students used a variety of prayer techniques, including praying in silence, in sing together, and in intercession. They have prayer-walked, lit candles, and they have written letters and cards of support to kids their own age who’ve been swept up in the Syrian maelstrom.

“Anne van Gend, the director of the Anglican Schools Office in the Province, has undertaken to gather up those heart-warming messages and have them distributed by an aid organisation which is working in the refugee camps in Jordan.

The students have also used their allotted times to compose “prayer chains” – prayers written on interlinked loops of card – which will soon be strung around Wellington’s Cathedral of St Paul.

“It is so inspiring and encouraging to see this support from our schools,” the Archbishop of New Zealand, the Most Revd Philip Richardson, said. “As a church we are working hard to demonstrate to our government that as a country we can take many more refugees than the small number currently agreed to.

“The largest movement of refugees since the Second World War demands a generous response from us.”

In a statement, the Archbishop thanked the students for their “wonderful contribution to this work.”

The Bishop of Dunedin, the Rt Revd Kelvin Wright, has responded to criticism on social media from people who have said that “prayer is not enough.”

“I doubt that any one of these remarkable young [people] would disagree with you,” he said. “The point of prayer is, firstly, to change the person praying.

“And in the long run who is most likely to take effective action to solve difficult problems? Those… who pray? Or those who doubt?”