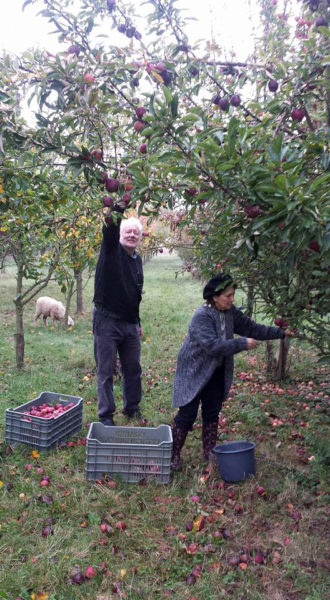 Lora and Arthur Bernabei gather apples from their 500-acre farm in southwest Hungary before heading to Nickelsdorf, Austria, where refugees are being welcomed.

[Episcopal News Service] As thousands of refugees fleeing conflict started arriving at the train station in Budapest, Hungary, in early summer, Episcopalians Lora Bernabei and her husband Arthur Reynolds knew that as Christians they were called to respond with loving kindness.

They gathered apples from their 500-acre farm in southwest Hungary, loaded their car and drove to the capital to start distributing them to the men, women and children who’d walked for weeks to find safety in the arms of their European neighbors. The refugees were exhausted, traumatized and desperately in need of food and water.

“When we first went to train station, we saw people just like us, and gave them bags of food and water,” said Bernabei via Skype from the Hungarian farm. “We really wanted to find a way of giving back from the abundance that we have in our own lives.”

They filled a shopping cart and within two minutes it was empty. So they returned with their van, carrying the equivalent of 40 shopping carts. That was gone in less than an hour.

They sent an email to their local priest and he put out a call for help in the parish newsletter. “All of sudden we had a carload of volunteers,” she said. “People just wanted to help – clothes, food, my car was filled to the brim.”

At the time, they weren’t to know that in early September Hungary would throw many of the refugees into prison and close its borders to force future asylum seekers, many destined for Germany, to find alternative routes through neighboring countries such Serbia, Croatia and Slovenia.

“The situation was changing very quickly. Hungary got a lot of bad press and … they were clearing out the train stations,” said Lora. 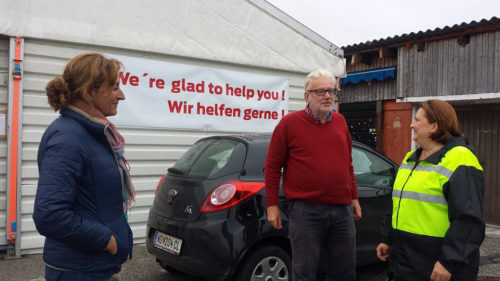 Arthur Bernabei meets with volunteers helping to welcome and process refugees as they arrive in Nickelsdorf, Austria. Photo: Lora Bernabei

But then Bernabei and Reynolds heard that the refugees were being well received at the Austrian border, so they diverted their mission and started making regular trips to Nickelsdorf, a point of historic significance and reception for people fleeing problems through Hungary.

“We saw the field where they cross over and then it gets much more sophisticated in Nickelsdorf,” she said, “with tents saying, ‘We’re glad to help you.’ ”

During their first trip to Nickelsdorf, a two-hour drive from their farm, they transported 400 kilos (882 pounds) of apples and delivered them to the Red Cross refugee reception center. They have since returned with shoes, toiletries, cans of food and other items to help them along their journey.

The refugees arrive at the Nickelsdorf reception center and generally stay there for one night. Every day the center is turned around. Buses are filled and the refugees transported to the German border as the center is cleaned and linen replaced for the next arrivals. 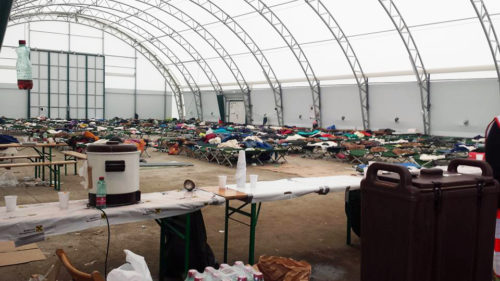 The refugee reception center in Nickelsdorf is turned around every day as refugees are processed and transported to Germany. Photo: Lora Bernabei

“We wanted to do our part somehow, and this is something tangible,” said Bernabei. “I was very moved the first time I witnessed the refugees as they are people with great dignity,” she said. “They are shopkeepers and dentists and they cannot stay in their own country. It’s luck that they’ve made it here. They are not poor – they are political refugees and they are people like you and me. They are fleeing for their lives, and we just want to help them on their way.”

For more than 20 years, Bernabei has been a lay leader in the Convocation of Episcopal Churches in Europe, serving on various commissions and boards. She was pivotal in the work of the Convocation’s Commission on the Ministry of the Baptized and the European Institute of Christian Studies, noted especially for her leadership to formalize the bishop’s vision for the discernment process and for lifelong Christian formation for both clergy and laity.

Like Bernabei, many Episcopalians and their ecumenical partners throughout Europe don’t see their response to the world’s worst refugee crisis since World War II as short term.

“Our churches in Europe, with the current refugee crisis, have stepped up all over the place,” said Bishop Pierre Whalon of the Convocation of Episcopal Churches in Europe, “not only [to provide] basic needs, but also counseling for the asylum process.”

In addition to the response in Hungary, Whalon recognized the work of Episcopalians in Austria, Belgium, France, Germany, Italy and beyond in extending support and hospitality to the refugees who’ve risked their lives to escape persecution.

“When [the refugees] are able to settle down, they become incredible resources for their host country,” said Whalon. “It’s very important that people know that. To not have compassion on these people, with their courage and desperation, with their extraordinary woundedness and their extraordinary skills, would be a complete and utter denial of the reality of Jesus Christ.”

Bernabei agreed. “These people want to work. In reality, they integrate very quickly … . They want to make a living and become part of society. They are professionals.”

“War sees no boundaries,” said Nagulan Nesiah, program officer for Episcopal Relief & Development, which is responding to the refugee crisis through regional partnerships that offer hospitality and welcoming safe spaces as people journey through the continent. “Many of [the refugees] were teachers, lawyers and professionals who had homes and stable careers. Now, they find themselves in a vulnerable situation without clothing or resources to care for their families. They arrive in their new countries with an eagerness and determination to succeed.”

The most recent updates from Episcopal Relief & Development about its response to the refugee crisis, as well as ways to donate, are available here.

“It’s an extremely arduous, difficult task, but all over the place we have incredibly creative volunteers, dedicated clergy,” said Whalon. “We’re making a difference in every community that we’re in, and we are only just starting to address this new crisis. It’s spontaneous, and it’s something I am very proud of.”

But the current refugee crisis, although largely centered in Europe, is a global issue.

The U.S. government has announced it will increase the number of refugees being resettled to the U.S. from 70,000 to 85,000 in 2016. At least 10,000 of these refugees will be from Syria. The rest will come from places like Democratic Republic of Congo, Somalia, Afghanistan, Iraq, Myanmar, Mexico and Central America, where war, violence and persecution have forced citizens to flee and prevented their ability to return home.

Each year, Episcopal Migration Ministries, through a network of 30 local organizations, provides a wide spectrum of services for more than 5,000 refugees, asylees, special immigrant visa holders, and Cuban/Haitian entrants, including resettlement, employment, and additional case management to refugees with significant medical or mental health needs. These new Americans rely upon this assistance and support as they rebuild their lives in security and peace in communities across the United States.

“For Episcopalians, refugee resettlement ministry is a tangible, meaningful and powerful way of being in the world: a way of living out our Baptismal Covenant to seek and serve Christ in all persons, to love our neighbors as ourselves, to strive for justice and peace among all people, respecting the dignity of every human being,” said Allison Duvall, Episcopal Migration Ministries’ program manager for church relations and co-sponsorship.

“Refugee resettlement is the story of individuals, families, and communities, of neighbors knowing one another, caring for one another, learning from one another’s stories, experiences, strengths, and gifts. And, in knowing each other, growing in understanding, compassion and respect.”