This article is the first in a weeks-long series that explores the response to the global refugee crisis by The Episcopal Church and its ecumenical and interfaith partners. 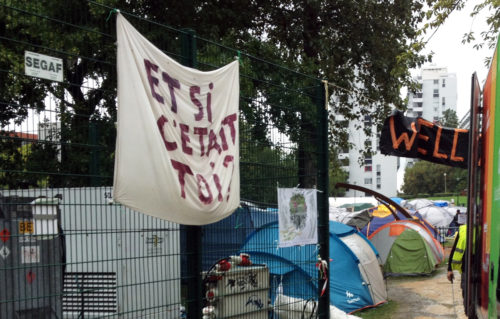 A sign hanging on the fence outside a refugee camp in Brussels in September asks the question “What if it were you?” Photo: Sunny Hallanan

For the Rev. Sunny Hallanan and her parishioners at All Saints Episcopal Church in nearby Waterloo, Belgium, that question – “What if it were you?” – has been a constant reminder that those escaping conflict and persecution need to be treated with compassion and respect rather than suspicion and fear.

After a month volunteering at the camp in Maximilien Park, Hallanan got to know many of the refugees. Although she didn’t speak much Arabic and they had yet to grasp basic French, just to sit with the refugees and to share the few words they did know seemed to be enough to form friendships and build trust. 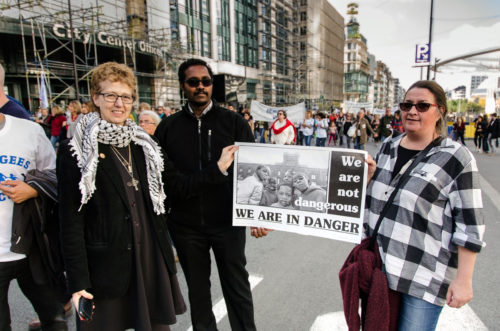 Hallanan met doctors, dentists, lawyers, teachers, shopkeepers, a physicist – people who back home in Iraq, Afghanistan, Syria and other conflict zones had shared the same kinds of dreams and responsibilities that she had until war and extremism forced them to flee for their lives. Although they look different and have different customs and religions, they are more like her than she could have imagined, Hallanan thought. “What if it were me?” she asked, surrounded by refugees one rainy October morning outside a Red Cross processing center near Brussels’ Gare du Nord train station.

“A lot of these people have come here to escape religious extremism. As people come here, they join into the local culture, and they’ve learned a lesson of how devastating religious extremism can be,” she said. “A lot of these people are young men whose choice was: join ISIS (the self-styled Islamic State) or be beheaded. So we have to keep them here. We can’t send them back to that.”

On any given day, the volunteers at the camp would be assigned various jobs, such as cleaning the kitchen or toilets, serving food, picking up litter or putting up tents. 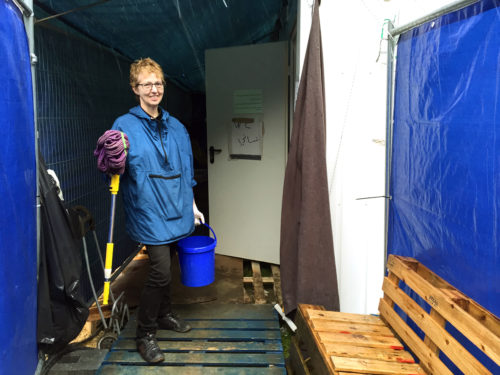 “It’s not glamorous work, but it’s essential for creating for these people as good an environment as possible,” said All Saints parishioner Felicity Handford, who had volunteered at the camp until it was dismantled at the end of September.

But for Handford, building friendships with refugees and other volunteers was a really important part of the ministry.

“The first time I came to the tent city, I was a little bit nervous about talking to people,” she said.

But then a group of men from Afghanistan invited Handford to sit down and join them so that they could share their experiences with her. Although they didn’t speak the same languages as her and communication was difficult, Handford said it was clear that these refugees were eager to build relationships with the local people.

“When you talk to people, they cease to be statistics,” said Handford. “They’re not problems; they’re people who’ve been driven out of their country. They’re now facing a really difficult journey, and that is integration into a completely different environment and completely different culture. How we as a community deal with that will make the difference in the relationships we have with their countries after this mess is over, and that for me is critical.” 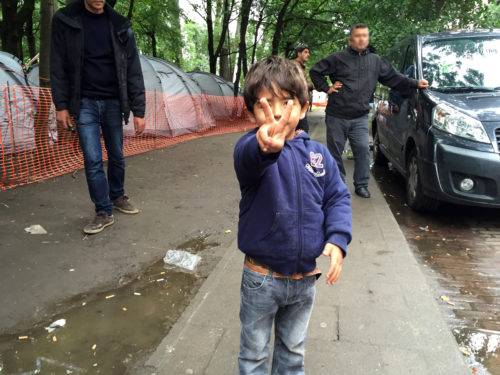 A boy from Iraq offers a peace sign from his temporary home at the refugee camp in Brussels. According to UNHCR, half of all refugees are children. Photo: Felicity Handford

Although in recent months the media has focused on Syrian refugees fleeing war and seeking asylum in Europe, the violence in Syria is just one of the ongoing conflicts in the crisis. Decades of war and violence in places like Democratic Republic of Congo, Somalia, Afghanistan, Iraq and Myanmar have forced citizens to flee and prevented their ability to return home.

In Belgium, 5,512 asylum applications were filed in September. By comparison, Germany, which has adopted an open-door policy to those seeking asylum, took in more than 200,000 the same month.

The U.S. government has announced it will increase the number of refugees being resettled to the U.S. from 70,000 to 85,000 in 2016. At least 10,000 of these refugees will be from Syria. Many will be assisted by Episcopal Migration Ministries, the refugee resettlement service of the Domestic and Foreign Missionary Society.

(The Domestic and Foreign Missionary Society is the legal and canonical name under which The Episcopal Church is incorporated, conducts business and carries out mission.)

For more than 75 years, The Episcopal Church has welcomed refugees to the United States, helping them find safety, security and new lives as American citizens.

“Every year, Episcopal Migration Ministries works with local resettlement partners, congregations, and individual volunteers, to welcome refugees to the United States from the world’s most war-torn places,” Deb Stein, director of Episcopal Migration Ministries, told ENS. “This is a life-saving and transformative ministry, one that gives every Episcopalian a way to respond to a global crisis on the local level.” 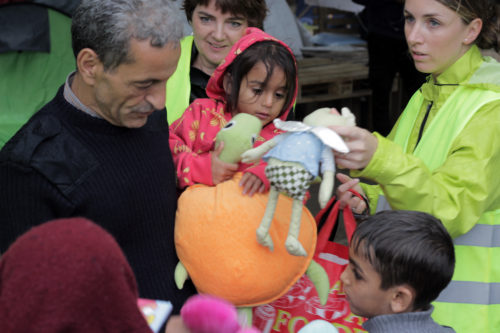 A Syrian refugee family are assisted by volunteers as they arrive at the camp in Brussels. Photo: Ahcene Tighrine

Since 2013, Episcopal Relief & Development has been responding to the refugee crisis through regional partnerships. With the recent crisis, the agency is working with Islamic Relief to provide support for people arriving in the Greek islands, collaborating with Us (formerly USPG) and the Church of England’s Diocese in Europe to offer emergency aid to those fleeing their home countries through Athens, and partnering with the Convocation of Episcopal Churches in Europe and its congregations as they offer hospitality and welcoming safe spaces as people journey through the continent.

“Faith communities are well placed to play a unique role in the crisis,” Nagulan Nesiah, program officer for Episcopal Relief & Development, told ENS. “Once the people settle in the countries where they are able to file asylum, there will be a long-term role for relevant organizations to assist with transition and integration. Congregations in the Convocation of Episcopal Churches in Europe operate multiple resettlement ministries. In fact, some of them have been running for decades. These ministries embody a key strength of the church to maintain a permanent presence in communities and serve as an invaluable asset to vulnerable people.” 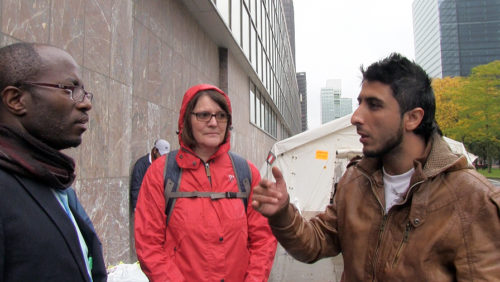 All Saints parishioners Janvier Nzamutuma (left) and Felicity Handford (middle) listen to the concerns of an Iraqi refugee about the time it takes to process new arrivals in Belgium. Photo: Matthew Davies

Back in Belgium, Janvier Nzamutuma, a refugee forced to flee from Rwanda during the 1994 genocide, is another All Saints parishioner who had volunteered at the Brussels camp.

Having lost both parents, three sisters and an older brother to the Rwanda genocide, Nzamutuma could relate to the traumas of war and persecution and the journeys that the refugees had experienced.

When he left Rwanda, Nzamutuma traveled to the Democratic Republic of the Congo, where he stayed at a refugee camp for several years. It was this experience that he recalled when the Brussels camp started up and why he felt the need to volunteer there.

“I met one refugee from Syria who told me that … he was traveling by bus … and he took his brothers and sisters and mother, and everybody was shot – and he reached here alone, so this was comparative to what I had experienced,” Nzamutuma told ENS, standing outside the now-fenced-off Maximilien Park.

When they heard that the tent city was to be dismantled at the end of September and the refugees evicted from their temporary canvas homes, the volunteers were concerned about where the refugees might end up.

But it was a strategy of Platforme Citoyenne de Soutien aux Réfugiés Bruxelles (Citizens Platform for the Support of Brussels Refugees), the organization that had run the camp, to force the local authorities to take more responsibility for the new arrivals.

“The fact that the line outside the government offices is shorter today is a really promising sign because it must mean that they’re taking more in,” said Hallanan, arriving to see the empty park in early October. “So the Platforme Citoyenne strategy seems to have worked.” 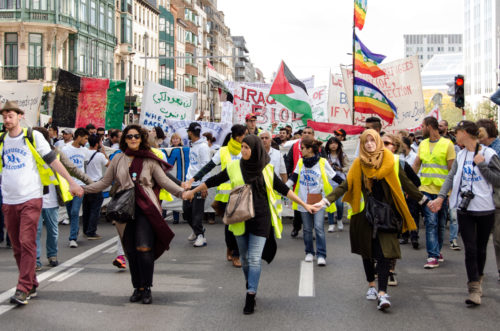 Thousands of people take to the streets of Brussels on Sept. 27 for a solidarity march in support of refugees. Photo: Felicity Handford

Like Hallanan, many Episcopalians and their ecumenical partners throughout Europe don’t see their response to the world’s worst refugee crisis since World War II as short term.

“Our churches in Europe, with the current refugee crisis, have stepped up all over the place,” said Bishop Pierre Whalon of the Convocation of Episcopal Churches in Europe, “not only [to provide] basic needs, but also counseling for the asylum process.” 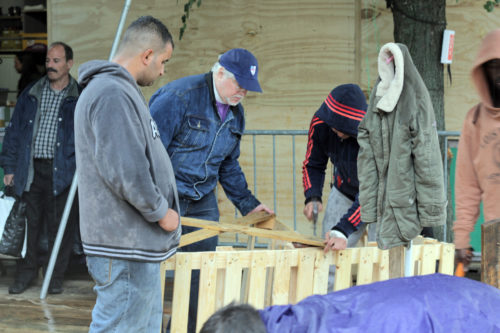 Bishop Pierre Whalon helps to volunteer with some construction work at the refugee camp in Brussels in September. Photo: Ahcene Tighrine

In addition to the response in Belgium, Whalon recognized the work of Episcopalians in Austria, France, Germany, Italy, Hungary and beyond in the midst of the crisis. “It’s an extremely arduous, difficult task, but all over the place we have incredibly creative volunteers, dedicated clergy,” said Whalon, who had visited the Brussels camp in September and helped to build tables out of pallets for the refugees. “We’re making a difference in every community that we’re in, and we are only just starting to address this new crisis. It’s spontaneous, and it’s something I am very proud of.”

Handford learned during her time in the camp that many of the refugees are well educated – “people who have skills and gifts that if we allow them to develop here, will bring something to society here. But we have to get over this fear of differences.” 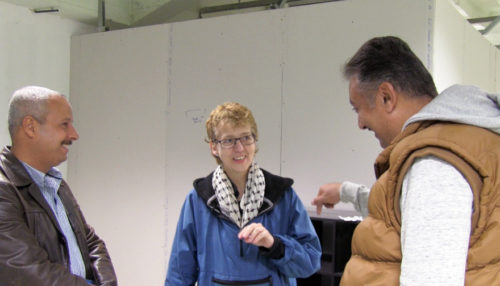 The Rev. Sunny Hallanan gets to know refugees from Iraq who arrived in Belgium three months earlier. Photo: Matthew Davies

“Diversity is a wonderful thing for people everywhere,” said Hallanan. “If God made people who are different from us, we should get to know them and share in them and rejoice. Who knows what wonders people will work in Europe and in our midst, through these people who come and bring us a different perspective?”

For Handford, Hallanan, Nzamutuma and the entire All Saints community, their volunteering has been a hands-on ministry that has added an important new dimension to the parish’s outreach and one that they intend to expand.

But there is one question that will continue to drive their response: