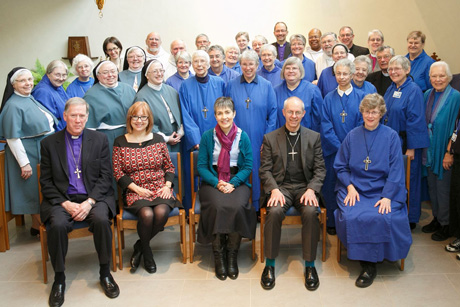 Archbishop of Canterbury Justin Welby meets members of the Sisterhood of St. John the Divine in Spring 2014. Photo: SSJD

[Anglican Communion News Service] Women aged between 22 and 40 are being invited to “spend a year in God’s rhythm” while they learn to pray, serve others and study, while living in intentional community alongside the Sisterhood of Saint John the Divine in Toronto, Canada.

The community is offering up to 10 places a year as part of the “Companions on the Way” formation program, which begins in September 2016.

The Sisterhood of St. John the Divine (SSJD) was founded in 1884 in Toronto, as part of the second generation of Sisterhoods emerging out the Oxford movement. It is a prayer and Gospel-centered monastic community bound together by the call to live out the baptismal covenant through the vows of poverty, chastity, and obedience.

Over the past 130 years they have founded and ministered in hospitals, homes for the aged, schools, and community missions. Today, their focus is primarily on spiritual formation, spiritual direction, retreats, and spiritual care at a rehabilitation hospital founded by the sisters.

“We feel strongly that God is calling us to this companions ministry for young women at the same time that we desire to renew our own mission as a contemporary monastic community,” the Rev. Sister Constance Joanna Gefvert, the coordinator of the SSJD companions, said. “We will be formed as much by them as they will by the experience of living among us.”

While a number of contemporary communities have been formed as a result of the new monastic movement, the SSJD companions program is thought to be unique in offering a contemporary intentional community for women within an inherited monastic community.

“The women who participate will build community among themselves and develop leadership skills that can be used in the emerging church at the same time that they are mentored by an existing community,” Gefvert said. “The closest thing I can think of is the St. Anselm community at Lambeth, being mentored by Chemin Neuf; but in our case the new provisional community is actually a part of an established permanent community.”

The existing SSJD community is relatively small: it comprises 21 sisters plus three “Alongsiders” who are discerning entering the community and three other seriously engaged “Discerners.” And yet it is probably the largest of the Anglican/Episcopal communities in North America, apart from the Order of the Holy Cross.

“Most of the sisters live at St. John’s Convent, with a few in Victoria,” Gefvert said. “There is a great deal of interest among the sisters in reclaiming our earliest mission to the poor and the sick, and that is one thing the companions will help us do.

“If we have the full complement of 10 women coming for a year, there is not nearly enough work to be done at the home base. Partly for that reason, and even more importantly to meet the longing of young people to care for those on the margins of society, we are setting up volunteer opportunities in a number of ministries in Toronto – some of them part of our diocese, under the umbrella of FaithWorks, some connected with parish churches’ outreach ministries and Fresh Expressions, and some ministries of other denominations and agencies.”

The community first began exploring the companions program in 2011, but felt it was important to evaluate its new “Alongsider” program first. Gefvert explained: “Our experience with Alongsiders has been very good, and has in fact brought some new [mostly middle-aged] members into the community.

“Now we are ready to launch a program for younger women which will allow them to develop their own community within SSJD.

“As the Archbishop of Canterbury said in his letter to religious orders a year ago, when he announced the St. Anselm community, we too hope that this program will plant new seeds of the religious life within the Anglican Communion.

“We will be very happy if a couple of women decide to stay and help renew SSJD. However our main motive is a ministry to the church. I, and the sisters as a whole, believe strongly that the renewal of the church, and a healthy future, will come from the religious orders.

“The current Archbishop of Canterbury said this to us when he was with our community last spring, as have the past two archbishops of Canterbury.”

The Sisterhood of St. John the Divine will provide room and board for companions, who will share their gifts and skills with the community. The program is open to women who are members of the Body of Christ, whether through intention or baptism and regular participation in a spiritual community; and is open to both Canadians and international participants.

There is also the opportunity for participants to receive academic credit for study undertaken through Wycliffe College at the Toronto School of Theology.