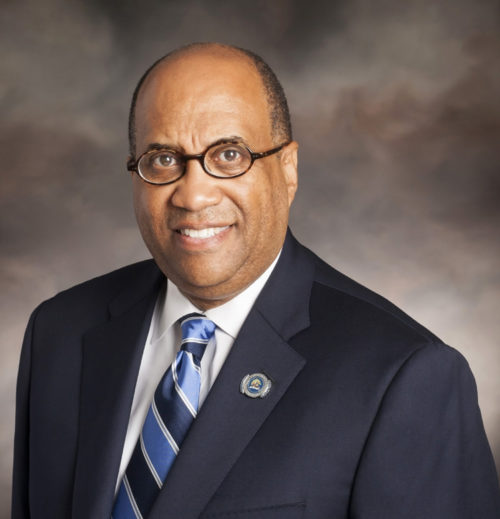 With all the pomp and circumstance befitting the return of a son of Saint Augustine’s University, the investiture ceremony is part of a week-long celebration of Ward and the university.

“The Falcon community is excited about officially installing Dr. Ward as the 11th president of Saint Augustine’s University,” said Shelley Willingham-Hinton, vice president for marketing and chief communications officer and chair of the inaugural committee. “The committee has worked hard to plan a week of events that reflects the rich history of the institution, reinforces President Ward’s roots to the community, highlights the achievements and talents of our students and alumni, and celebrates our spiritual roots while engaging the community.”

Themed “Preserving the Legacy. Ensuring the Future,” the scheduled events for the week are centered on Ward’s commitment to promoting the rich legacy of the university and ensuring that the sons and daughters of Saint Augustine’s University have the benefit of a quality education.

A highlight of the week is a special event featuring Dr. Michael Lomax, president and CEO of the United Negro College Fund (UNCF) on Oct. 27 in the Seby B. Jones Fine Art Building Auditorium. Lomas will speak regarding the continued relevancy of historically black colleges and universities.

Since 2004, Lomax has been president and CEO of UNCF, the nation’s largest private provider of scholarships and other educational support to African-American students and a leading advocate of college readiness. Under his leadership, UNCF has raised $2.3 billion and helped more than 92,000 students earn college degrees and launch careers.

Besides the investiture ceremony, another key event for the week is scheduled for Oct. 24 when the university will make a special corporate announcement with Venessa Harrison, president of AT&T North Carolina.

Some of the other events include a community service project at Saint Monica’s Youth Center; a presentation titled “View from the Great Wall: A Student’s Perspective on China” and an open house meet and greet at the president’s residence (Lulu Robinson/James & Emma Boyer House).

To end the week of festivities, the National Alumni Association of Saint Augustine’s University will host a President’s Inaugural Soiree at the Marriott Raleigh Crabtree Valley in Raleigh on Oct. 31.

For more information about the presidential inaugural celebration, visit inauguration.st-aug.edu or call 919-516-4327.