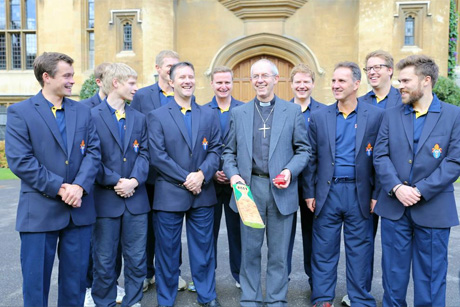 [Anglican Communion News Service] A Church of England XI will take on a team of cricketers representing the Vatican later this month in a repeat of last year’s historic first encounter in Canterbury.

The St Peter’s Cricket Team batted first in last year’s match at Kent County Cricket Club’s Spitfire Ground in Canterbury; and scored 106 from their 20 overs. But in a tight battle, the Archbishop’s XI went on to win by six wickets with five balls to spare.

Now, the Anglican side have been invited to Rome for a re-match, and will take on the Vatican XI on Sunday 25 October, after the final mass for 200 bishops and other delegates who have been attending the Synod on the Family.

This afternoon the C of E team visited Lambeth Palace for a meeting with Archbishop of Canterbury Justin Welby who tweeted a picture of the meeting using the hashtag #CofeVatican2020, saying: “With the Archbishop’s XI cricket team. Wishing them success against Vatican side later this month.”

“The cricket will be fun and a strong symbolism of our ecumenical ties,” the C of E Captain, the Revd Steve Gray, said, adding: “though we will of course do our best to emerge victorious again.”