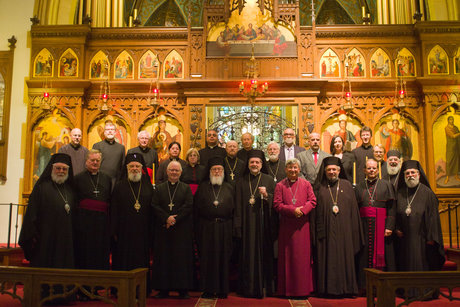 In the name of the Triune God, and with the blessing and guidance of our Churches, the International Commission for Anglican-Orthodox Theological Dialogue (ICAOTD) met in Buffalo, New York, from 19 to 25 September 2015. The Commission is deeply grateful for the generous hospitality extended by the Orthodox Church of the Annunciation in Buffalo (Greek Orthodox Archdiocese of America, Ecumenical Patriarchate of Constantinople).

Metropolitan Nicholas of Detroit formally welcomed the Commission to its meeting in his diocese. He offered praise and encouragement for the work of the dialogue. He stressed the urgent need for expressions of Christian unity in light of the deep challenges and crises before the global community, mindful of events unfolding even as the Commission undertook its deliberations.

The Commission brought to completion the first section of its work on the theological understanding of the human person, with the adoption of its agreed statement, In the Image and Likeness of God: A Hope-Filled Anthropology. The report, shortly to be published, is the culmination of six years of study on what Anglicans and Orthodox can say together about the meaning of human personhood in the divine image.

This agreement lays the foundation for continuing dialogue on ethical decision-making in the light of this vision. At its future meetings the Commission will consider the practical consequences of this theological approach to personhood. The Commission anticipates ongoing study in areas such as bioethics and the sanctity of life, as well as human rights and ecological justice.

The meeting commenced with the Hierarchical Divine Liturgy at the Annunciation Greek Orthodox Church. Commission members also attended an ecumenical celebration of Evensong at St Paul’s Episcopal Cathedral. The Commission was welcomed by Bishop William Franklin of the Diocese of Western New York. In his homily he spoke of the contribution to Christian unity made by a former bishop of the diocese, Charles Henry Brent, who was a leading pioneer in the Faith and Order movement. Daily prayer strengthened and grounded the work accomplished together. Morning and evening prayers were offered, alternating between Anglicans and Orthodox.

The fellowship of the Commission was enriched by the warm and gracious reception by parishioners of the Annunciation Church, and their parish priest, the Revd Dr Christos Christakis, who is the Orthodox Co-Secretary of the dialogue. Members of the Commission were introduced to the unique historic, cultural and natural characteristics of the city of Buffalo, Niagara Falls and the surrounding area.

The work of the Commission will continue at its next meeting in September 2016, to be hosted by the Anglican Communion.

Representatives of the Orthodox Church

Representatives of the Anglican Communion

The Most Revd Roger Herft of Perth
The Anglican Church of Australia, Co-Chairman

The Revd Marc Billimoria
The Church of Ceylon

The Revd Dr Gloria Mapangdol
The Episcopal Church in the Philippines

The Revd Dr Duncan Reid
The Anglican Church of Australia

The Rt Revd John Stroyan of Warwick
The Church of England

The Revd Dr Timothy Bradshaw
The Church of England

The Revd Dr Joseph Wandera
The Anglican Church of Kenya